Per the AJC, Reggie “Dog” Ball is academically ineligible to play in the Gator Bowl. If that’s not the perfect capper to his illustrious college career, I don’t know what is.

It’s only fair to let the head coach that stayed in his corner through thick and thin have the last word. So here’s what Chan had to say about losing Reggie and starting defensive back Kenny Scott for the bowl game:

… Although this is a very, very bad ending to the careers of these two young men, we can’t forget the contributions they have made to the Georgia Tech program the last four years.

I never will, Chan. I promise.

He will be missed. 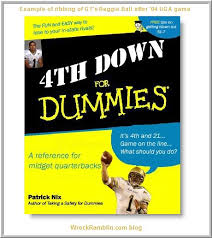 Well, it’s the big news about the Georgia program this week – Mike Bobo named offensive coordinator and Mark Richt giving up the playcalling reins next year.

No one has any idea about how this will work out, of course. But I was impressed with the playcalling on the game winning drive against Tech.

Speaking of which, Josh Kendall in The Macon Telegraph has an interesting note in an article appearing today:

… Bobo was given the team’s playcalling duties before the Nov. 25 Georgia Tech game, a 15-12 Bulldogs win. Stafford said he was impressed with that game plan, particularly with Bobo’s work on the final drive. Stafford said a 7-yard pass play to Mohamed Massaquoi to convert a crucial third down came on a play Bobo had just drawn up that week.

“He’s pretty gutsy to have confidence in a play that we’d run for one week on third-and-the-game,” he said. “He trusts the players to execute, and it’s a good feeling.”

Nice start. Just remember, as they say in the securities business, past performance is not a guarantee of future success…

Comments Off on Mike Bobo, playcaller

This is getting too easy to make fun of.

Dienhart has a new candidate for the ‘Bama job.

Hey, you’d better believe it. After all, “… it’s not that crazy. Not from what I hear talking to NFL assistant coaches.” WTF?

Next candidate: Dick Vermeil. Because it won’t be that crazy from what he hears talking to NFL TV production assistants, right?

Comments Off on The man doesn’t quit.

The facts are pretty simple: 18 bowl games just 10 years ago, 32 this year. The reason for the surge is explained in this terrific article appearing in The San Diego Union-Tribune, Bowls gone wild!. (h/t The Wizard of Odds) It’s an essential read for anyone who’s been engaged in the discussion about college football playoffs.

Because – surprise! – it’s all about the money:

Like many industries that make powerful companies rich, the bowl system keeps growing. But whether that’s good or bad depends on your rooting and financial interests …

The result has been to turn the traditional rationale for bowls on its head:

“I think there are too many bowls,” former NCAA President Cedric Dempsey said. “We’ve moved away from the two main objectives of the bowl system. One is to reward excellence. It’s hard to say a 6-6 record is excellence. Secondarily, it was supposed to be a celebration of the game by the community. Many are now just television-driven.”

If you’re a playoff proponent, you’re probably thinking “so what?” about now. After all, if the bowls are being slowly shorn of their traditional purposes, isn’t that just another reason to urge a shift to a playoff set up?

Not so fast, my friend. The economics of the bowl system are truly twisted. The networks that drive the payoffs to the colleges don’t make money on the big games; they make the bucks on the Las Vegas Bowl and others of similar stature:

… In February 2004, ABC representatives testified before the Knight Commission, which pushes for academic reform in college sports, that they were losing money on the BCS games. A report done by UCLA researcher John Sandbrook for the same commission surmised that ABC was subsidizing those BCS games with all those lesser bowl games it televises.

Consider that the cumulative rights fees paid by ABC to televise the four BCS games was $100 million. The rights fees paid to the other 24 games played in 2003-04 was about $19.6 million, according to Sandbrook’s report.

“The opinion one would have to form is that ESPN and ABC were subsidizing the license fees they paid to the BCS on the backs of the other bowls,” Sandbrook said.

That’s why ABC dropped out of the most recent bidding for the BCS games (except for the Rose Bowl), after lowering its bid figure from the amount it had previously paid for those rights. It makes more money now.

There are a few conclusions to be drawn here. First, there appears to be a ceiling as to how much revenue the BCS games can generate. Second, the real money more and more comes from expanding the size of the field engaged in post season play. Third, as the last section of the article indicates, trying to come up with some sort of bowl/playoff hybrid would be extremely difficult at best and destructive to the bowls at worst.

All of which brings me back to a point I’ve belabored regarding college football playoffs, namely, where’s the money going to come from to cover the need for increased payoffs under an NCAA “everybody in D-1 shares” formula? The economics of the current arrangement practically mandate a large post season in order to generate the revenue the schools would expect. Yet many proponents of a smaller (4-16 team) playoff system insist without any evidence that it would easily generate more money than the bowls currently do (an assertion weakly made in the article, again without any support).

I just don’t see it.

Comments Off on Bowl economics 101

Filed under BCS/Playoffs, ESPN Is The Devil, It's Just Bidness