I thank everyone for the feedback I received about whether I should start commenter registration.  It was a close call for me – the votes were for, but the passion I got in a number of emails was against – and I’ve decided to leave things as they are for now.

That being said, if I get the sense that it’s getting worse, I reserve the right to change my mind.  And I won’t put it up for your thoughts the next time.

If I can just take a minute to reiterate what this is and isn’t about, I’d appreciate your patience.  I have no desire to censor anyone’s opinion and I think if you’re fair-minded about that, you’ll acknowledge that the comments section at GTP is pretty free wheeling.  But you’re all guests here, and just like I wouldn’t expect you to walk into someone’s house you’ve been invited to and take a dump on the rug, I hope you’d have enough respect for everyone else here not to behave badly.

I’ve nuked people from the site for three reasons.  None of them were because of certain opinions being expressed.

I’m not giving second chances for this sort of stuff any more and I won’t give warnings again.  Those of you who are better at catching this than I’ve been on occasion, please let me know by email.  I promise I’ll take care of it promptly.

And now, I return you to your regularly scheduled grousing.  GATA!

The man is oblivious to what’s really going on.

“However, I got involved as a Congressman because this isn’t just an extracurricular activity, it is a billion-dollar, interstate industry that impacts many public schools which are funded with taxpayer dollars,” he said. “This is not just about on-field competition, it’s about compensation. I believe that a playoff will go a long way to restoring fairness to both.”

That’s Jim Delany you can hear snickering in the background.  Although he’s no doubt appreciative that Barton can turn his attention back to where he’s needed, protecting the vulnerable oil and gas industry.

Yeah, it’s nice that college football is taking steps to reclaim its special relationship with New Year’s Day, but let’s not forget why this is noteworthy to start with.  If down the road the money becomes more attractive for spreading the bowl games out again, does anybody think they won’t grab it?

Opening day is going to be a blast (furnace).

If this is the story on June 29th… 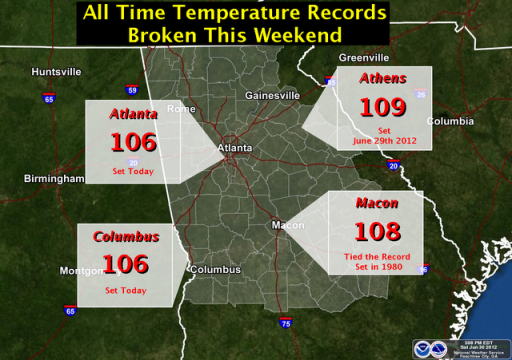 The two hottest experiences I suffered through at football games were at a South Carolina game more than a couple of decades ago, when I had to seek cover because of the heat, and the 2003 game at Clemson, which featured the Tigers’ center throwing up on the field and the concessions running out of ice before the end of the first half.  Good times.  Facing something on that level for Buffalo?  Let’s just say that whoever shows up for the opener is dedicated.

And somebody better make sure the ice machines are working all day.