I’m not sure what I find myself more flabbergasted about by the latest Stewart Mandel Mailbag – that there are people who “regularly request” Mandel to revisit one of the more incoherent things he’s written, or that Mandel thinks it’s a good time to give them what they want.

And, no, it has nothing to do with being a permanent enemy.  It has to do with very little of what he says making sense.  Maybe that’s a Western thing.  If somebody from Montana could explain why Miami is a king and Tennessee is not, I’d be most grateful.

And while you’re at it, oh wise one from Montana, do you really not recognize this little fella?

Name that caption: let’s wrap this up, aiiight?

A loyal reader sent me this photo of Nick Saban filming a Ford truck ad. 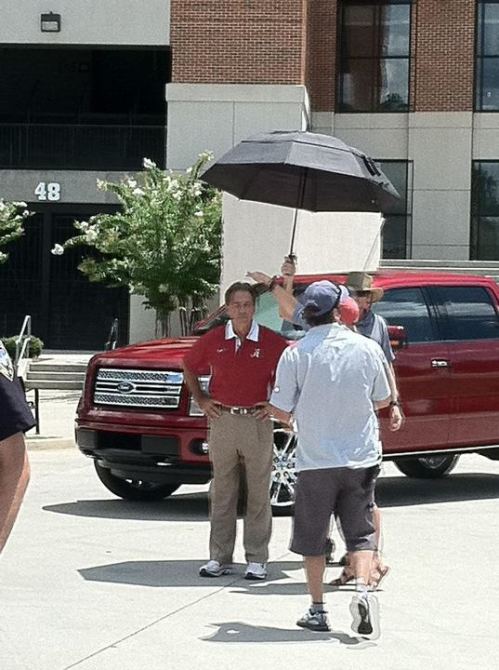 Clearly, that’s the look of a man who doesn’t have time for this shit.  Even if he’s being paid for it.

Ellis Johnson, ladies and gentlemen. He’ll be here all week. Don’t forget to try the veal.

Man, it turns out that Ellis Johnson is pretty handy with a quip.  Who knew from his time in Columbia?  I don’t know if he was simply being deferential to his old boss, or if he didn’t want to outshine him on the wit front, but he’s not holding back now.

Even better, and definitely unlike Spurrier, it turns out that Johnson is on the side of the angels in the playoff debate.  Here’s his great quote about the inevitability of an expanded postseason:

“Sooner or later, it’s going to go from picking the two best teams at the end of the year, now we’re going to pick four,” argues Johnson. “Whoever the fifth one is going to cry until they have eight. Once we have eight, someone’s going to start crying until we have nine.

“Basketball right now has 6,048 or something like that. I don’t know how many they have in the brackets, but the last team that didn’t get picked is still crying.”

And I’m really digging his cynicism about the super-duper selection committee.

And what about this committee that is supposed to replace the computer system and decide who will take the field come playoff time? Who will this committee consist of? What criteria will they measure a team by? “You got your Republicans, you got your democrats, I don’t know how you trust anybody,” coach Johnson colorfully put it.

I wonder what he thinks about who won the SEC East last year.

You’re gonna like this one.  It’s the ’96 Georgia-Auburn game with lots of Munson.

Hines was a beast in regulation and Edwards dominated the overtime.

I watched this game at a hotel bar in New Orleans.  I remember cussing when Auburn went up 28-7.  An Auburn fan overheard me and said with a tone of disgust, “Don’t worry.  Terry doesn’t know how to hold a big lead.  They’ll come back.”

Turned out he was right.