Kickoff for the Georgia game on Nov. 24 is set for noon. ESPN will televise.

That’s six or seven hours less to prepare for the genius.  Hope Grantham’s up to the task.

Name that caption: these aren’t the good ol’ days.

Look who did a little catching up before Saturday night’s game.

Somebody haz his serious face on.  Maybe they were talking about Garner.

Your pithy observations are welcomed in the comments.

This week in OMG!

Look, I get that TAMU’s win over Alabama is a big deal.  It established the Aggies as a legit player in the conference.  It has significant implications for this year’s BCS title game.  But as tempting as it may seem to some pundits, it’s not the apocalypse.

Here’s Stewart Mandel, who’s never shied away from reading dramatic, wide-scale trends into single game wins before (how’s that whole “Boise State’s win in the Fiesta Bowl changes college football as we know it forevah!” thing working out, by the way?):

However, one school’s decision to change conferences has had a direct hand in one of the most exciting stories of 2012. In fact, it led straight to the most impactful upset of the season, a game that may one day go down as a milestone moment that not only alters a national championship race, but one that ushers in far-reaching changes…

… Oh, they’ve proven themselves. And in doing so, they may well precipitate a sea change in the SEC. As many as four conference schools (Kentucky, Arkansas, Tennessee and Auburn) may soon change coaches, and you just know they’ll be seeking their own versions of Sumlin. Defense will remain a bedrock for schools like Alabama, Florida and LSU, but before you know it, nearly half the schools in the league could be running their own version of the Air Raid.

Oy vey, Stewart.  You have to go all the way back to two seasons ago to find a team that won the SEC without playing elite defense.  Since then, I bet half the teams in the conference have been looking for the next Cam Newton, too.

Meanwhile, like the sun rising in the east, it’s Gang of Six time.

So a mid-level Big 12 team has done pretty well in the SEC this year. Doesn't that blow some holes in the current dogma?

Somebody’s gotta be the next Urban Meyer.

UPDATE:  Year2 has more rational thoughts about what implications to take away from Alabama’s loss.

A fish rots from the head down.

Brian VanGorder’s defense may have given up four touchdowns and 310 yards on Georgia’s first four possessions, but that doesn’t mean he’s doing a bad job.  Just ask him.

“We’re not built. The defense is not built with size, strength and power right now,” VanGorder said. “That becomes obvious against teams like Georgia, the first game with Clemson. It shows up. Players know. We talk about it.”

Asked whether guys have lost some of their edge since week one, VanGorder acknowledged it’s a plausible theory.

“I think that’s kind of natural when you’re having the kind of season that we’re having,” VanGorder said. “But not to a degree where it’s concerning to me. Bottom line is you work hard and you hope some good things happen and you hope players make a play here or there. We’ve not been able to do that this year…” 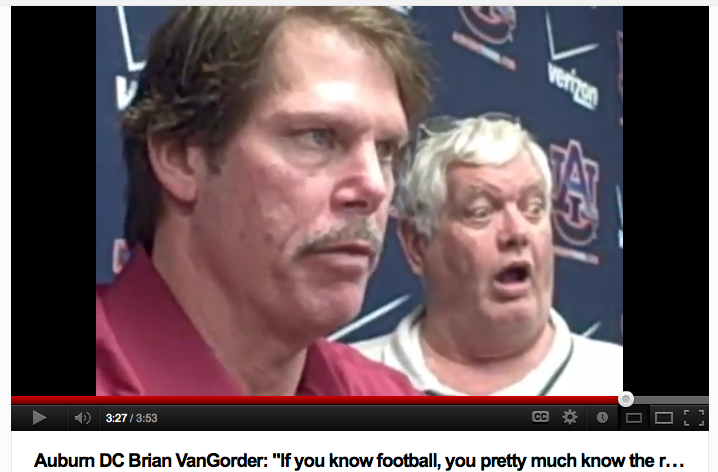 Not too surprisingly, Gene Chizik is puzzled by the comments from a man whose defense is actually underperforming Ted Roof’s.

“I don’t really know how I interpret that,” Chizik said. “I think that there’s some obviously some positions that we feel like we need to upgrade in terms of productivity, but other than that, I’m not really sure exactly what all that means. We can always be bigger, we can always be stronger.”

Willie Martinez is simply grateful nobody is pointing a finger at him these days.

“They were a good team that just had a bad night, a terrible night, and we played probably our top game of the year,” South Carolina coach Steve Spurrier said Sunday. “Sometimes it can go like that, but they regrouped, so give Coach Richt, his staff and players some credit. They’ve won them all since they left here.

“Their schedule was favorable, but that’s the way it is sometimes. They beat Florida, which was a huge game, and they’re the Eastern Division champs again. It’s very similar to last year. We’re 6-2 two years in a row without winning the division, and we beat the winner.”

Cheer up, Coach.  You’ve got Georgia in September again next season, so the player suspension jokes get a new lease on life.

Egg on their faces

A.J. McCarron uncharacteristically threw a couple of picks in the TAMU game, which means the top passer rating in the SEC now belongs to…

That number is good enough for third in the country, by the way.

That probably comes as a bit of a surprise to the Dawg fan sitting in front of me Saturday night, who was absolutely, positively certain that the redshirt was coming off Hutson Mason when Murray had to sit out a play.

Overall standings show a modest lead, but nothing insurmountable yet.

Another killer 6-4 week for me, which leaves me at 27th overall.  I’m going to have to make a serious move soon.  Or cheat.

You may have missed it, but the word is out that the SEC’s run in the national title game is on the rocks.  Evidently, it’s kind of a big deal.  Ironically, it’s all the result of conference teams beating up on each other.