Chase Stuart has a follow up to his college passer rating post that I mentioned last week in which he looks at the top passing quarterback seasons from 2005 through 2012.

Aaron Murray’s 2012 performance ranks eighth on his list.  Combine that with his standing in a variety of passer statistics compiled since 2000, and it seems to me you can make a case that Murray’s been one of the best passers in the SEC in the last decade.  Nor has he been too shabby on a national level.

Agree or disagree?  And why?

On the mound today…

Gotta go work on my fast ball, I'm throwing the first pitch for the ATL BRAVES 💢👊💢today.., wishing them the best of luck!!

I just hope he doesn’t sack the catcher after he throws him the ball. 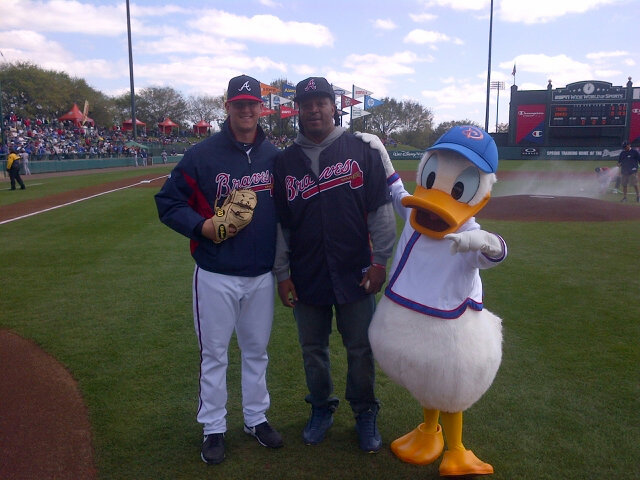 ‘Who wants to defend this?’

Revealing nugget from Jon Solomon’s piece on former NCAA infractions committee chair Jo Potuto, who, by the way, as one of the few people associated with the NCAA who doesn’t appear to have her head stuck up her ass, ought to be in consideration should the day ever come when Mark Emmert is deposed:

Top NCAA leaders have privately debated for years how to defend its model as the games became more commercialized. Their answer for keeping it: Losing the amateurism component loses operating as a nonprofit with tax benefits and control over policies.

“If it becomes a version of the professional model, why would you go see an athlete in college who looks like a pro when the pros play better?” Potuto asked. “If they’re college students, that has to mean something.”

I don’t think I’ve ever seen the gap between what the suits want and what the fans want described better.  And in a mere two paragraphs!

Potuto – gasp! – is even willing to entertain the heretical notion that college players should be able to profit off their names.  She’s unconvinced it will be the end of the republic.

“I don’t know that it would be such a terrible, dramatic, awful thing,” she said. “We should look at what it looks like and talk about what maybe the consequences might be. If boosters involves themselves in ways that tilt things, maybe you say the players can’t get the money until they leave school. I think it’s worth looking at seriously instead of worrying the house will fall down.”

On the other hand, Potuto believes economists should create a model that accurately shows the monetary value of college players.

“”What I think we would find, to the chagrin of a lot of college athletes, is their value in name likeness is not a whole lot, and a lot of it comes from wearing the name of their school on their shirt,” Potuto said.

Clearly this woman is too reasonable to be entrusted with a position of responsibility governing college athletics.

The further adventures of “I heard it on the Internet, so it must be true.”

That legitimate reporters spent time, effort and energy running this nonsense down is a sad commentary on our times.  Journalism, ftw!