You paid good money for that?

The BCS hired Premier Sports Management to rebrand the BCS and help come up with a new name.  The result?

Guys, whatever you shelled out for that, I’d have undercut PSM by half.

It could have been worse, admittedly.

“I’ll be happy with whatever,” Big Ten Commissioner Jim Delany told reporters at the BCS meetings today, according to CBSSports.com’s Bruce Feldman’s Twitter feed. “Obviously I’m not great with names.”

And there’s your understatement of the day.

OU AD Joe Castiglione on hearing the name "College Football Playoff": "Is that really the name or just a space-filler?"

Name that caption: Bite me.

For some reason, Subway cooked up a Jarvis Jones tribute. 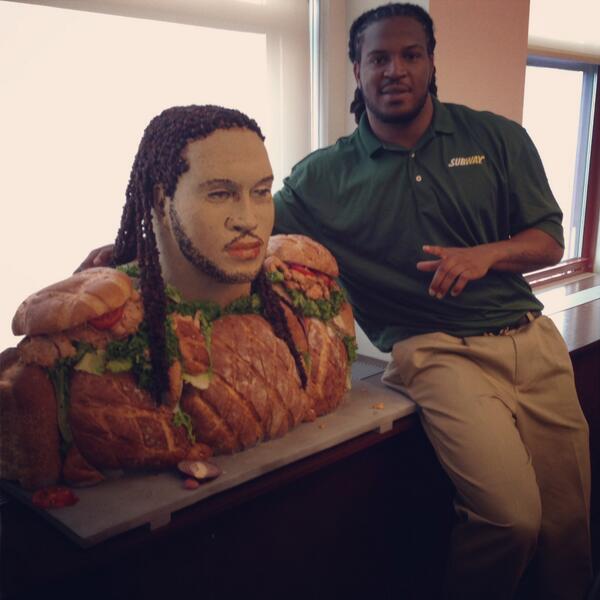 At least he’s getting paid for it.

Another day, another alienated group of people.

As outgoing North Carolina chancellor Holden Thorp explained in Chapel Hill on Friday how ill-equipped most collegiate CEOs are to handle the issues surrounding major collegiate athletics, several dozen Division I athletic directors gathered at a beachside hotel probably nodded in agreement. The ADs came to Santa Monica not for the pier, but to discuss the major issues facing college athletics without anyone from the NCAA around. Besides, several athletic directors said, few people at NCAA headquarters seem to care what the ADs think these days.

Commence the airing of grievances.

Under president Mark Emmert, the NCAA has aggressively embraced a model that puts all the power in the hands of university presidents and chancellors. That would be fine, some high-profile athletic directors said, if the presidents sought the advice of the people who work in athletics on a daily basis. Instead, Emmert and his hand-picked group of CEOs have rammed through rules and policies with only minimal consultation of the people who must actually implement those rules and policies. Why will much of the recently passed football recruiting deregulation package probably get tabled? Because no one bothered to ask the people working in athletics. If they had, they might have realized a relaxation on the rules that govern how often coaches can contact recruits would be fine with most ADs and coaches. They also would have realized a relaxation on the rules that govern exactly who may contact recruits could result in a hiring spree by the wealthiest schools that would leave everyone else going further into debt while trying to keep up. Why did the plan to offer athletes up to a $2,000 annual stipend to cover the full cost of attendance get scuttled after its passage at a 2011 presidential retreat? Because no one bothered to check with less wealthy schools to see how they felt about it. If they had, they’d have known it stood no chance of passing an override vote.

The athletic directors want to have an open dialogue with the NCAA about the pending Ed O’Bannon lawsuit, which could radically reshape the business model of major college sports. They want to talk about the potential impact should former football players sue over concussion-related issues. They want to talk about conference realignment, which has upended the industry in the past three years. They talked about all those issues Thursday and Friday in Santa Monica because the NCAA leadership doesn’t seem to want to discuss any of it with them. And the people in charge of some of the nation’s most powerful athletic programs are fed up.

In other words, Emmert chose a management model that relies on decision-making from a group of people who, according to Thorp, at least, don’t have a damned clue about how to go about their business (“… We go to conference or NCAA meetings to discuss new rules and when we get home, our ADs tell us we were crazy to agree to these changes. And they’re usually right…”).  That actually explains a lot.

Which brings us to the bottom line:

At the meeting in Santa Monica, another AD said there is “zero confidence in the guy in that chair,” referring to Emmert. While the enforcement issues have received the bulk of the attention, this issue may be the most critical for Emmert’s NCAA. Because while problems with enforcement aggravate the handful of schools being investigated, the systematic shoving aside of some of the brightest and most experienced people in college sports aggravates people at every school. And, despite what has transpired in the past three years, the schools still ultimately run the NCAA. The schools want the NCAA to work. The wealthiest schools could strike out on their own, but that would require significant time and investment. They would prefer to create a workable system within the NCAA.

So, they don’t want Emmert.  But they need the NCAA.  That’s not such a great combination for your long-term prospects, if you’re the president.

You know, were I Les Miles or Steve Spurrier, I don’t think I’d waste my breath complaining about unbalanced conference scheduling.  I’d be raising bloody murder about this, instead.

First, the SEC: The conference is only scheduled through the 2013 season, but McGarity said the hope is to have a scheduling plan for 2014-17 approved at the SEC meetings in Destin in early June.

Georgia can’t really do anything in its non-conference scheduling until it knows the dates and opponents for its SEC games over the next few years.

“We are basically on hold until we receive the SEC schedule for ’14 and beyond,” McGarity said. “Because hopefully that will have dates, and obviously opponents. So that we can start to plug in our (non-conference) opponents.”

And yes, it would be an eight-game schedule that will be approved in Destin.

Two years in and these guys still don’t have a scheduling gameplan in place.  And the most they’re prepared to come up with in the short run is a three-year deal.

McGarity blames the SEC’s uncertainty on the new postseason…

There hasn’t been that much discussion about a nine-game schedule, according to McGarity, but it’s not something to rule out. It depends in large part on what comes out of the football playoff meetings.

“We continue to be educated on what the definition of strength of schedule means,” McGarity said. “What are other conferences doing in that regard. So there’s a lot of things to really discuss if we do go to a nine-game model. But we have not talked about that other than just in theory, to see what some models of that would look like.”

… but what if it’s something else?  What if – and this is nothing more than perverse speculation on my part, mind you – this is what Slive and the ADs really want?

Put it this way:  for a variety of reasons (seventh home game revenue for the ADs, easier OOC scheduling for the coaches, for starters), let’s say the conference wants to stick with an eight-game format.  But Slive is running into real resistance from his TV partners about throwing more money into the broadcast deal without being given more product.  If you won’t offer CBS and ESPN quantity, why not offer quality as a compromise by offering to rejigger the cross-division schedules on a regular basis in order to cherry pick the best East-West matchups?  The best way to do that is by not getting too far ahead of things timewise.  Sticking to a three-year framework should give the SEC a handle on which programs will likely be the most attractive viewing options.

If you’re a coach running a top ten conference program, this sort of arrangement would be a downer for your hopes of winning the SEC and maybe playing for something bigger.  But it would make for better TV.  Hmm… wonder who wins that battle.

Like I said, I have zero proof that this is what’s going on.  But the sad thing is that I can’t totally dismiss it either.  Call me crazy.

The right man for the job

If D. J. Fluker’s agent has problems to deal with because of this tweet, maybe he should hire Jay Jacobs to get to the bottom of it.

Shorter Matt Barkley:  the biggest regret about my senior season was not letting my teammates know I thought the head coach was a dick.

The opposite of a vote of confidence

This is pretty awesome:  last year, Southern Miss sold a home game so it could raise enough money to afford to fire Ellis Johnson.

“I just sat in my locker and cried.”

Somehow, Tony Barnhart relives Jeremiah Attaochu’s self-described “season from Hell” without even a passing glance at Georgia Tech’s most lopsided loss of the year.

Of course, that may be because Tech clinched a spot in the ACCCG that day.

Or maybe it’s just that we’re used to it.