The only problem is with who delivered it.

Jadeveon Clowney says three QBs in the SEC are scared of him. "Aaron Murray is one of them."

Jadeveon Clowney says Florida will be biggest East challenge. "I'm not downing Georgia, I just know they lost a lot on defense."

You wanna tell Clowney to get stuffed?

That being said, it probably wouldn’t be a bad thing for Georgia to beat SC this year.

UPDATE:  That was quick.

UPDATE #2:  I guess this is bulletin board material.

Georgia's respect must be taken back

Another musical palate cleanser, another R.I.P.

I was lucky enough a couple of years ago on my road trip to the Ole Miss game to spend the night in Clarksdale, Mississippi, home of the blues.  One of the highlights of my night there was dropping into a joint called Red’s and watching T-Model Ford.  I learned shortly afterwards that he suffered a stroke and, sadly, no longer performed.  Given his age (and that’s a matter of whom you asked), I expected that he wasn’t long for this world.

T-Model Ford passed away today.  His obituary is a must read.

When Ford was young, he served two years of a 10-year prison sentence for killing a man in self-defense, and he had scars on his ankles from serving on a prison chain gang, Stolle said.

Ford had six wives and 26 children, Stolle said. When Ford’s fifth wife left him, she gave him a guitar as a parting gift.

“He stayed up all night drinking white whiskey,” or moonshine, “and playing the guitar,” Stolle said. “He kind of went on from there.”

This is a good introduction to what Ford was doing late in life:

And this is my favorite tune… NSFW.  But it’s catchy.

Stella was with him that night in Clarksdale.  She’s a helluva woman, too.

The difference between negative recruiting and reality

See if you can tell which is which in this quote from Tennessee’s newest commit:

Last Friday, McDowell made an appearance at UGA’s Dawg Night prospect camp and had a long conversation with Bulldogs coach Mark Richt.

“I had it in the back of my head that Georgia would be a good place, but I didn’t think I would be happy there at the end of the day,” McDowell said. “It’s because of the trouble the players get into, and stuff like that. I didn’t want to take that risk to be around that.”

“I feel a connection there but then again, there were a lot of safeties already committed to them,” McDowell said. “So I just wanted to go somewhere where I could set my name in stone and compete (for playing time) early.”

Plus, Willie Martinez, for the win…

Why I miss Jarvis Jones a little more today.

I think we already knew this, but still, it’s nice to hear it confirmed.

Jeff Driskel, asked who hit him hardest: “Jarvis Jones. He hit me the hardest. And the most.”

Florida QB Jeff Driskel said he's happy to see former #UGA LB Jarvis Jones gone to the NFL. "He made millions of dollars off of us."

Why I like Will Muschamp a little more today.

I don’t think I need that sarcasm meter for this.

Muschamp: “We appreciate our friends from Ohio making sure we follow NCAA rules. They certainly know something about NCAA rules.”

BTW, who’s down with a Florida-Ohio State bowl game match up?

I’ve been waiting to share this one with you for a while.  Bill Connelly has written a book that should be published by month’s end.  One of the neat things he’s done in it is compile a list of “the 10 games that most directly formed my fandom as I know it”.  Even better, he asked me to do the same for inclusion.  I’ve been waiting to share my list with you guys because it was such a fun exercise – although keeping it to ten was damned tough – but held off until Bill had the info out there.  Since he’s let the cat partially out of the bag, I figure there’s no stopping me now.

I will follow his lead, though, in only providing the list itself, without my reasons for why each particular game is included.  (Not that you should have much trouble figuring out some of those.)  Keep in mind, as I told Bill, these aren’t necessarily the ten best college football games of my lifetime, although several of them qualify as such, but they are the ten games that best explain my obsession.  They are the touchstones that remind me why college football resonates with me more than any other sport I’ve followed:

Like I said, there are a few more that just missed the cut, but so it goes.  I’d love to hear what games you guys would pick.  Give me your lists in the comments.  And have fun with this.

Florida takes a page out of the Georgia Tech marketing book. 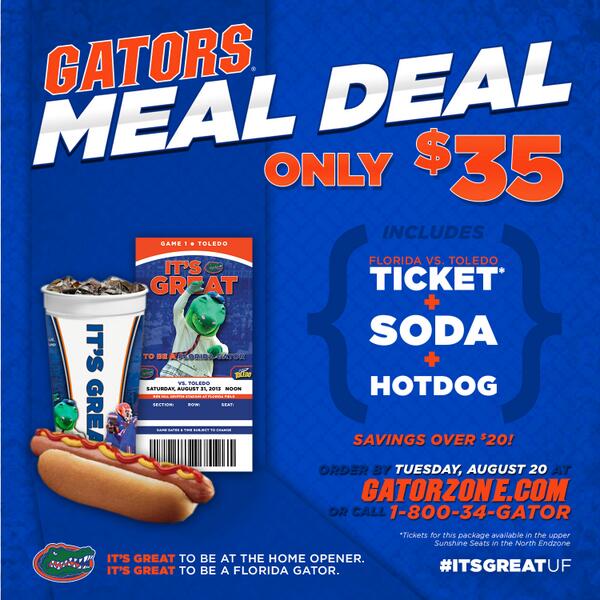 If I hadn’t seen this, I wouldn’t have believed it.  (h/t Drew Collins)