You will no doubt be relieved to hear that justice and Huntley Johnson have been served.

The State Attorney’s Office has dropped charges against University of Florida football player Antonio Morrison, who was arrested early Sunday morning on charges of interfering with a police animal.

Darry Lloyd, spokesman for the State Attorney’s Office, said the charges were dropped, a move that was expected after State Attorney Bill Cervone on Sunday indicated concern with the sufficiency of evidence to constitute a crime.

“I would say there was no evidence,” Johnson said. “The actions of the police were embarrassing.”

There was no word from the victim on the decision, but all in all, I am reminded of this famous passage from a Sherlock Holmes story:

By the way, does Boom lift the suspension, or does he keep it in place on grounds of general stupidity? Never mind…

UPDATE:  This is choice.  Huntley’s worried about the bad precedent prosecution would have set for us.

“I would not want to be a University of Georgia fan at the Florida-Georgia game next year when those people start getting down on all fours and barking because if there are K-9 units in the facility we’re going to have a mass arrest,” Johnson said.

What if we bark from an upright position?

Sympathy for the devil

I’m not wishing for this to happen, because except for one game a season I enjoy watching someone as talented as Clowney play, but I gotta say as a fan of a program that saw its superstar take a four-game hit from the NCAA over the sale of a game jersey that if this story has legs, I won’t shed any tears if there’s a suspension.

Oh, and if that happens and Mark Richt wants to take a shot at Spurrier with a snarky comment about the satisfaction of playing South Carolina early in the season, I’ll be okay with that, too.

Murray brought up another interesting point during SEC Media Days that hadn’t occurred to me before. This will be the first season of his four as the Bulldogs’ starting quarterback that his backfield also returns intact.

Sure enough, Murray had Shaun Chapas at fullback and Washaun Ealey at tailback in 2010, Bruce Figgins and Isaiah Crowell in 2011 and Merritt Hall and Todd Gurley this past season.

Having Hall and Gurley back — along with Keith Marshall and Quayvon Hicks as well — is a big deal, he said. And that goes well beyond the rushing and scoring production.

Another reason to be excited about Georgia’s offensive potential in 2013.

Yes, it is.  And off the top of my head I can’t think of an opponent on Georgia’s schedule that can make the same claim.

Oh, what could go wrong?

Maybe I’m missing something, but it sure seems like the new targeting rules are setting up as Penn Wagers’ wet dream.

Targeting ejections will be reviewed, but can't be appealed after games.

So, an ejection call can be overturned… but the 15-yard penalty will stand? HOW?

2013 looks like it may go down as the best year for officiating evah.

Pace is the new spread.

Yesterday we learned that Georgia’s offense belongs in the SEC’s balls-out group:  “In the SEC East, Kentucky and Tennessee join Missouri and Georgia as teams that are going to go as fast as possible.”

So you know what you’re gonna hear today, right?  Yep – Georgia was one of the fifteen slowest AQ teams in the country last year.

Now as it happens, if I have to choose definitions between those two, I prefer the latter, simply because it’s based on plays per game instead of total plays run in a season.  But even that still paints with too broad a brush for me.  For one thing, it doesn’t take into account starting field position.  It also ought to exclude garbage time stats, as most teams with big leads late are going to slow things down to run out the clock.

For comparison’s sake, here are some other 2012 per play averages:  Texas A&M, 21.41 spp; Ole Miss, 22.75 spp; Clemson 22.77 spp; Georgia Tech, 27.64 spp; Alabama, 30.19 spp; Florida 30.60 spp.  (By that measure, Georgia looks pretty middle of the pack.)  This isn’t perfect either, as it doesn’t peel off garbage time play, but at least it takes field position out of the equation.  There’s one more thing that bugs me, though.  If we’re attempting to measure pace, that is, how quickly an offense can run its plays in a game, shouldn’t we take the time it takes to run each play out of the math?  That is something far beyond my meager analytical skills to attempt, but I do think it’s relevant.

Does this make any sense to anybody else?  And how much should we care about it anyway?

In case you need a little mid-July juice, the AB-H has a nice video rewind of last season’s highlights for you here.  There’s a lot of great stuff there, but check out Murray’s mechanics at the 2:47 mark in the first clip – they’re beautiful.  That’s how things go when you’ve got time and a great pocket to throw from.

Also, that comparison of his play fake against Ole Miss and Greene’s against Vandy is a fun one.  Aaron does a fine job, but nobody sells that play like Greene could.

Bill Connelly tells us something that sounds pretty obvious, but it’s also something that perhaps Georgia’s been reluctant to embrace over the years.

The good news is that wasn’t an issue last season, as the Dawgs ranked fourth nationally in points per trip inside the opponent’s forty-yard line.  How much of that was due to a change in philosophy and how much of that should be chalked up to Marshall Morgan’s leg I can’t say.  But it’s certainly a result that bears repeating.

Bill also shows that Georgia was very good at keeping teams that got inside its forty off the scoreboard, ranking tenth.  That’s good, because Grantham will certainly have his hands full in the opener:  Clemson was third last season in points scored after crossing the 40.  What’s also good, though, is that the Tigers were a little more pedestrian on defense when teams moved the ball inside their 40, as they ranked 47th.  If Georgia’s offense can hang on to the ball, you’ve got to like its chances of punching some numbers on the scoreboard.

… is because the big boys have much bigger fish to fry.

College football is setting the stage for the final season of the controversial Bowl Championship Series and a forthcoming four-team playoff that will crown the sport’s national champion starting in 2014. But the future of the NCAA and how major college football is structured seems more fragile than ever.

In fact, what once seemed like an idle threat now seems like a very plausible scenario: Schools in the ACC, Big Ten, Big 12, Pac-12 and SEC might break away from the rest of the FBS leagues and form their own federation within the current NCAA structure. Such a move would allow the schools and their conferences to write and approve their own rules, such as increasing the value of scholarships to meet the full cost of attendance, reforming recruiting rules and overhauling the way they investigate and punish rule breakers.

Call it Mark Emmert’s final legacy.  At least I’ll have something to write about next January.

The buffet table is cranked up and ready to go.

Filed under Auburn's Cast of Thousands, Because Nothing Sucks Like A Big Orange, Georgia Tech Football, Phil Steele Makes My Eyes Water, Randy Edsall Is A Dick, Stats Geek!, Strategery And Mechanics

Name that caption: one of these guys isn’t like the others.

We haven’t had one of these in a while, so do what you can with this photo keepsake from yesterday in Bristol. 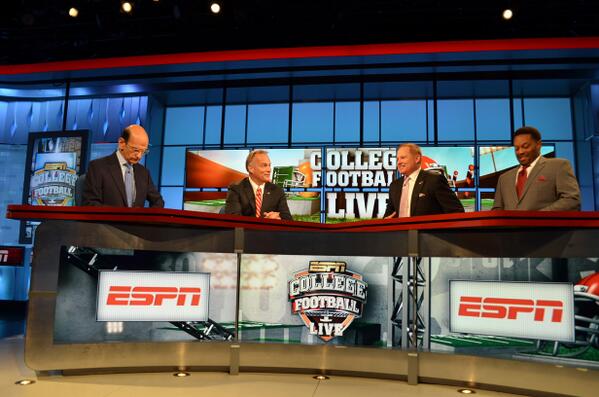