My only surprise in reading this article is this:  “The man was not cited.”

You know who has never won a big game?

I was gonna go down that path, tongue planted firmly in cheek, but I see the AJ-C already beat me to the punch.

Monday Rewind: QB Hutson Mason has plenty of experience but remains an unknown in big games such as he'll play Sat. http://t.co/rmLo7D5LoU

Except they’re being serious.  Loosen up, guys!

I gather the reason for the heaving bosoms from criticism about the lack of class being shown Aaron Murray is because they believe Josh Nesbitt received a deliberate injury in the 2009 loss at the hands of Georgia’s players.  Any excuse for an embarrassing loss will do, I suppose, but it’s not like they have to look very far for a rebuttal.

Man, I love watching him play.

In response to Jeff Schultz’ query, all I can say is was Georgia Tech more motivated than Georgia in 2009? Somebody seemed to think so at the time.  At least until they played.

It’s the rivalry game that got Richt his job.  Motivation won’t be an issue this week. 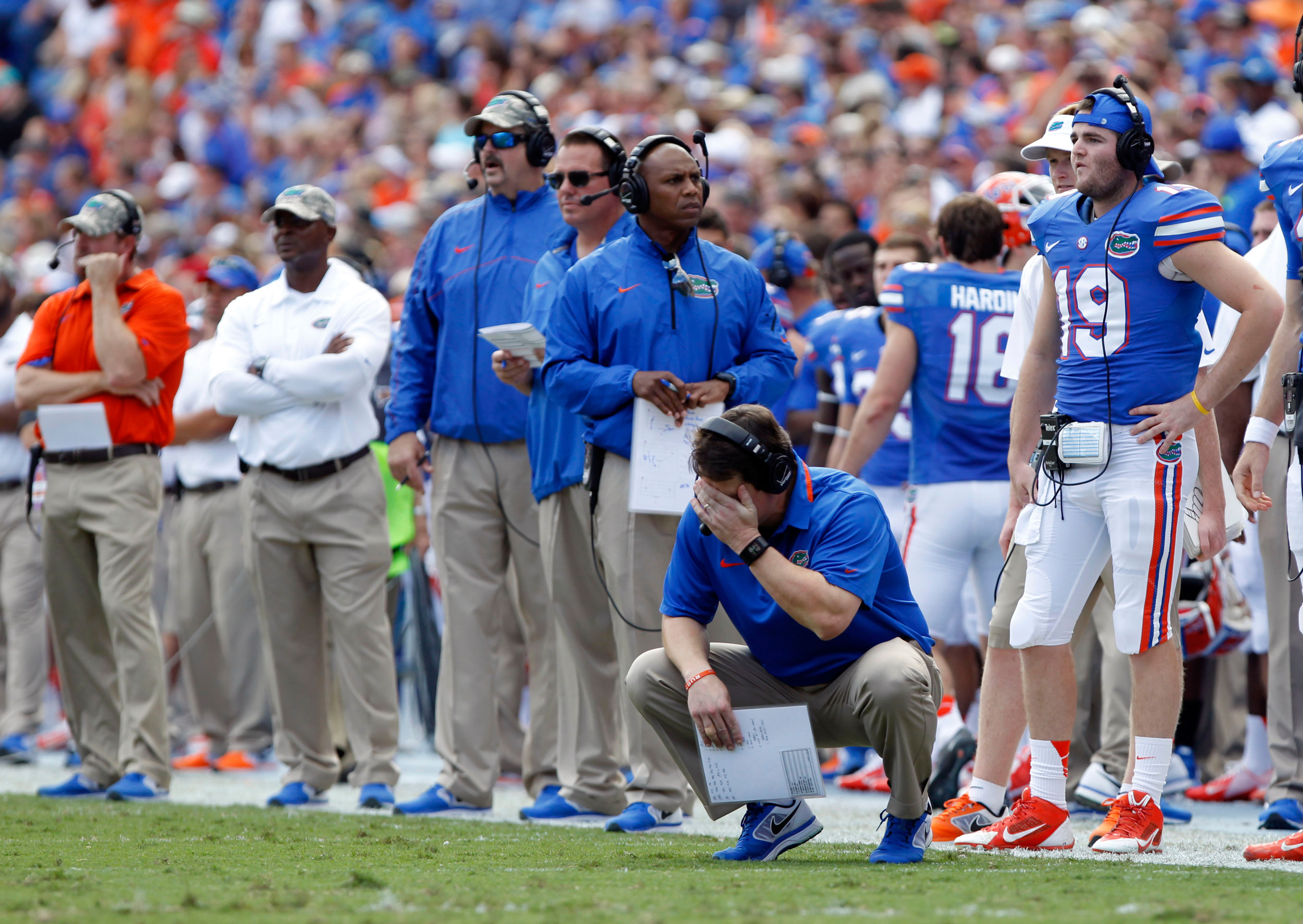 Will Muschamp’s got the license plate number of the semi that hit his defense Saturday.

“That’s why the service academies run it, that’s why they run it, that’s why a lot of these schools run it, because it takes talent out of the equation. A lot of talented guys don’t like having somebody at their knees every snap, either. That’s part of why they run it. Talent’s negated in that situation. It doesn’t really matter because you don’t have to block a lot of the guys.”

Somewhere in Atlanta, Paul Johnson is taking time out from his preparation for the Georgia game to call his AD about scheduling a game with Florida.

Back to struggling.  With that road win over UCLA, I couldn’t leave Arizona State out of my top ten anymore.  And I couldn’t quite bring myself to vote Baylor out of the top ten for losing to a Oklahoma State team that lost to a West Virginia team that got waxed by the Bears.  That left me knocking Oregon and Wisconsin out, just barely.

If there’s any consolation, there are a bunch of huge games this week that should sort things out to some extent.  Of course, that’ll probably mean I’ll spend thirty minutes again putting a ballot together.

Comments Off on My Mumme Poll ballot, Week 13

Logjam at the top this week.

And as you can guess from the weekly results, Trbodawg’s showing something of a finishing kick in the seasonal standings.

With only one week left to go in the regular season pool, that’s an almost insurmountable lead.

It’s a week that saw Florida fall from the ranks of the mediocre to the truly bad, but there were other developments that managed to sharpen the pecking order.

I saw a fair amount of knee-jerk (see what I did there?) reaction on the Interwebs yesterday about the coaches’ decision to let Aaron Murray stay in the game after it appeared he hurt himself on that long run because it led to the hit he took on his interception, which hit caused or exacerbated the ACL tear.

Nope.  It turned out, as has been the case so many times this season, to be a non-contact injury.

Aaron Murray “felt something pop” on his 28-yard run in the second quarter on Saturday night, according to Georgia head coach Mark Richt. It proved to be a torn ACL.

But Murray finished the drive and played two more on the torn ACL, waving off coaches and his backup, before it finally became unbearable.

“He was trying to hide it from everybody, I think,” Richt said Sunday night.

He did a good job of that… for a while.

Murray ended up staying in the game for 13 plays after tearing his ACL, completing a touchdown pass in the process, and completing 5-of-7 passes for 46 yards, as well as an interception, which proved to be the final pass of his Georgia career.

That is one crazy tough customer.  But this has to be the topper.

Preparing for Tech at office. 9:45 pm. In walks A. Murray to watch film. What a warrior.

Makes me wish there’d be another senior night ceremony so I could applaud him all over again.