“She said we weren’t real Alabama fans because it didn’t bother us that they lost. And then she started shooting.”

I know you shouldn’t tar an entire fan base because of the actions of a few crackpots, but between Harvey Updyke and this bitch, damn, Alabama, just damn.

Will Muschamp assures Gator Nation that when it comes to hiring his third offensive coordinator in four years, he can change.

UPDATE:  Alligator Army runs down a list of candidates.  Mike Mularkey sounds like a match made in heaven, doesn’t he?  But I think I’d have the most fun with Junior or SOD.  Do it, Boom!

You’ve got your troubles, I’ve got mine.

I wonder which fan base haz a bigger sad right now – Georgia’s, knowing that Richt has retained Todd Grantham and his 48th ranked total defense, or Michigan’s, which just got the news that Al Borges and his 83rd ranked total offense are back, baby!

If the rumors hold true, it should make for some epic grumbling before, during and after the Gator Bowl.

Not too shabby, Aaron.

Gene Sapakoff is a columnist for the Charleston Post and Courier.  Check out his Twitter chain explaining why, if Jameis Winston isn’t cleared as to his off-field issues, he’s casting his Heisman vote for Aaron Murray. (h/t Rachel G. Bowers)

Again, I stopped caring about the Heisman Trophy a long time ago. But it’s gratifying to see the respect Murray’s season has garnered for him. He’s put that “big game” crap to bed for good, it seems. 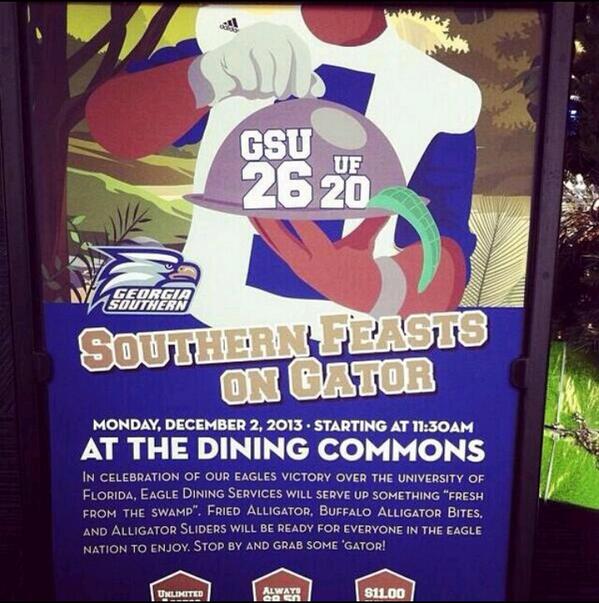 And now, for your viewing pleasure, salty tears from the Hive

In the wake of another tough loss, Stingtalk has actually been a little disappointing, as the locals there seem to be tearing into each other as much as anything else.  Fortunately the Hive has stepped up and cranked out some comedy gold with a couple of threads you’ll enjoy reading.

First, if you can’t blame your own team’s failings for the loss, blame the officials.  “I believe if we got any one of those calls, Tech wins.”  Well, maybe three or four…

This one’s even better:  “I hate to say it but it’s clear – We need to drop to Division II”.  What makes this one really great isn’t just that the original poster gets his divisions mixed up, but that one of the people chastising him for his attitude actually goes there with this:

CPJ has done a great job keeping us in these games with UGA.  The gap everyone refers to is regarding talent….not coaching.  We have the better coaches no question about it.  If CPJ had the talent of the 09 team each year, then we would win and compete for championships more often than not.  Unfortunately the win against UGA and the 09 shoulda coulda woulda, CPJ had the talent from arguably the best recruiting class we have ever had and that was with a FEW academic exceptions if I am not mistaken.

Trust me (or look at most draft boards), if GT and UGA would swap coaches, then we would lose 51-7 each and every year.

Johnson’s 1-5 against Richt, with the last three games in the series including two double-digit losses and a blown 20-point lead.  But it has nothing to do with coaching.  At least he’s not blaming this loss on the refs.

Those of you who want to see this series come to an end should be ashamed of yourselves.

They’re good kids. Really, they are.

To the surprise of absolutely nobody, Corch elects not to suspend two of his players who were ejected for fighting in the Michigan game for the Big Ten championship match.  That puts the ball squarely in the hands of Jim Delany.  If enabling Jim Tressel to take his team to the Sugar Bowl in the wake of Tatgate is any example, I’m sure he’ll do the right thing.

I watched the replay last night.  It was apparent almost from the get go ABC definitely didn’t bring its A-game to the broadcast – either that, or Reggie Carter played the most invisible game an ESPN impact player has ever turned in – but I found myself able to ignore most of Rod Gilmore’s chatter as the game went on.

Rivalry Week was crazy, but it didn’t have a huge effect on my ballot this week. Clemson be gone, though. Here’s my current top ten list (*tiebreaker):

I’m still not sold on the Spartans, but they’ve got an excellent opportunity to change my mind this week.  The Gamecocks, alas, do not.

A single winner this week…

Congrats to Sanders7631 for that.

With one week left to go, it looks like the seasonal race is going down to the wire.

Please note that the Week 15 schedule is a little on the thin side, so I picked a Friday night game. You’ll need to get your picks in a day earlier than usual, as a result.