If you really want to grasp the roots of where things went south this season, Paul Westerdawg has a pretty solid place to start:  the incredible shrinking class of 2010.

As Paul goes on to note, add to that Richt’s inexplicable willingness to undersign through several of the last classes, “… and you have a season where approximately 40 scholarship players had never played a snap before the season started.”  That’s how you get to the greenest secondary Georgia’s deployed in my memory, and, just as importantly, that’s how a team has trouble with injuries (granted, there were an obscene number of those this season) and in putting together competent special teams.

It seems to me that if you want to bitch about the coaching staff this offseason (and it’s a long offseason) the best place to begin is with roster management. Given the size of the last class, it may very well be that Richt has awakened to the problem he created, but the jury is still out on that, IMO.  Especially because the next phase we’re seeing in the recruiting wars – building up advisory staff for the purpose of managing high school contacts – isn’t really under Richt’s control.  At least not if B-M doesn’t want to play (i.e., spend money) that particular game.

Give the people what they want.

One of these days, I’m going to get it through my thick skull that college football’s capacity to disappoint me is bottomless.  Just when I thought I couldn’t be more bummed out about the future of the sport, along comes this:

CBS set record ratings this season for the SEC in a year in which the conference shattered many of its offensive records. Viewership is up on ESPN for this season’s BCS bowls, which have been some of the highest-scoring in the histories of those games.

Oh, goody.  And, gee, if that turns out to be the case, I wonder what the WWL will want to do about it.  Well, let everybody’s favorite hack explain it to you.

“I heard from a purist this morning who said, ‘You guys have ruined the game with all this scoring,'” BCS Executive Director Bill Hancock said this week. “I like them both. I was looking forward to the rock’ em, sock ’em Rose Bowl, and I was looking forward to what we anticipated happening at the Fiesta Bowl. The casual fan would rather see 52-45 than 7-6. Fans love offense. And I think during games people are talking people telling them, ‘You need to tune in.'”

Chicks dig the long ball!  And ESPN digs chicks.  The more, the merrier.

Now certainly on one level this is simply the result of being in a golden era of offensive innovation – as a reminder, you could do worse than check out the latest thing Chris Brown has written about what Malzahn is up to – but college football, just like any other sport, can make changes to the rules that open up scoring regardless of the prevailing offensive schemes.  Let’s face it, offensive holding is almost extinct.  The new targeting rules, while ostensibly created for other purposes, also restrict defenses.  Officials’ approach to running no huddle attacks has definitely been relaxed over the last decade, as any Georgia fan can tell you.  And there’s plenty more where that came from (I keep expecting the NCAA to adopt the NFL’s rule for pass interference).

Bottom line, if there’s one thing we know from the past few years, it’s that what ESPN wants, it generally gets.  Payment has its privileges.  And if big scoring games drive viewership, which in turn drives rights fees, what do you think Bill Hancock’s bosses will do in response?  Yeah, that’s what I think, too.

This isn’t about defense über alles, either.  I’m not longing for an world of Auburn 3, Mississippi State 2.  I was enthralled as anybody with the Georgia-LSU back and forth in this season’s meeting.  But the idea that college football needs to tinker with the margins to make the sport appealing to casual fans – bracket lovers, if I may be allowed the analogy – strikes me as both profoundly stupid for a sport that is so obviously built on a passionate fan base as well as insulting to those of us who already love what we’ve got.

Anyway, here’s hoping I’m wrong about what that study turns up.  After all, if offense were everything, wouldn’t Conference USA have dominated the ratings over the past decade?

Filed under College Football, ESPN Is The Devil

Name that caption, pausing for his next shot edition

This may be my favorite Spurrier face of all time. 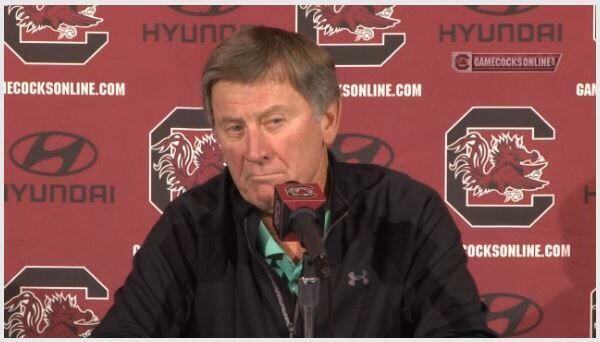 I’d offer him the traditional penny for his thoughts, but it looks like he’s getting ready to give them away for nothing.

You know what to do in the comments.

Agent Muschamp’s latest move should ring a bell with us.

Multiple sources have told Gator Country that former Texas offensive line and assistant head coach Stacey Searels has accepted an offer to become Florida’s offensive line coach. Searels, who served on the staff with Florida head coach Will Muschamp at LSU, is expected to be announced either Sunday or Monday.

The Georgia part of his resume is presented in interesting fashion.

At Georgia, Searels’ offensive lines gave up only 42 sacks in the 39 games from 2007-09. Dealing with injuries and a freshman quarterback in 2010, the Georgia O-line gave up 25 sacks but the Bulldogs did produce a 3,000-yard passer and an 800-yard rusher despite numerous injuries both on the O-line and the backfield.

From my selfish perspective, 2010 is when the bloom came off the rose.  As Tim Tucker put it when Searels left for Texas, “Georgia’s offensive line was expected to be a pillar of the 2010 team but drew much criticism as the Bulldogs struggled to run the ball effectively. Georgia finished 10th in the SEC in rushing.”  I sensed that Richt wanted Searels to stay, but I wasn’t exactly torn up over his departure.

The article notes that Searels has been an effective recruiter at Texas.  If so, that would be a change from his time in Athens.  (Something you’ll note the article glosses over entirely.)

One thing Boom should like about the move, assuming Searels is as taciturn as ever – if he and Roper don’t hit it off, we’ll never hear about it in the media.