On the day when Georgia officially announces Jeremy Pruitt as its new defensive coordinator/secondary coach – the same day! – Alabama shuffles its staff to give Kirby Smart the exact same roles.

Coincidence?  I think not.

Chip Towers constructs the timeline for the Pruitt hire:

… For better or worse, Jeremy Pruitt was Georgia’s first and only choice.

Think about it. At the earliest, it would have been Sunday before Mark Richt could have turned his attention to hiring a replacement for Todd Grantham. It wasn’t until after Georgia’s basketball game against Alabama that the Bulldogs were informed of Grantham’s offer from Louisville, and Grantham said he needed some time to think about it. quickly replied that they would be making not attempt to match it. By Monday night, Pruitt was in Athens and he was the Bulldogs’ coach by lunchtime Tuesday.

“We had a 4 o’clock meeting the day (Monday) after Coach Grantham told me (he was leaving),” Richt said. “Within 24 hours we had another 4 o’clock meeting and I introduced Coach Pruitt to the players. So it did happen fast and I’m thankful it did. But I’m most thankful we got the right man for the job.”

This wasn’t the result of some long-range plan.  It sounds like an opportunity arose, Friend reached out to Pruitt and Pruitt grabbed it.  What made the deal go was that Jeremy Pruitt really wanted to coach in Athens.

But multiple times, Pruitt said the main reason he’s now at Georgia was, “the guy sitting next to me right here,” referring to Richt. They’d first met when Pruitt was a high school assistant and brought over a couple of prospects from Ft. Payne High.

“I said then that was somebody I wanted to work for if I ever got a chance,” Pruitt said.

As for leaving the FSU and Jimbo Fisher, for whom he worked only one year and won a national championship in that one, Pruitt was succinct in his explanation.

“Coach Fisher and me are good friends, but when I decided what I wanted to do, I let him know and that was it,” Pruitt said.

I admit that one of my first thoughts hearing the news was that if Pruitt lives up to expectations, it’s hard to see him with the program beyond his three-year deal.  That’s probably still true, but maybe this is the beginning of a beautiful longer-term friendship.  In any event, it’s good to have another guy on staff who wants to be there.

Last word on the Louisville coordinator hires goes to Robert Weintraub, who delivers this gem:

In this climate, even Kevin Ramsey, who was so incompetent as UGA defensive coordinator in 1999 that he allegedly was relieved of his duties at halftime of the bowl game and subsequently supposedly punched out Bulldogs head coach Jim Donnan, could land a new gig (with a higher salary, natch) within 48 hours. 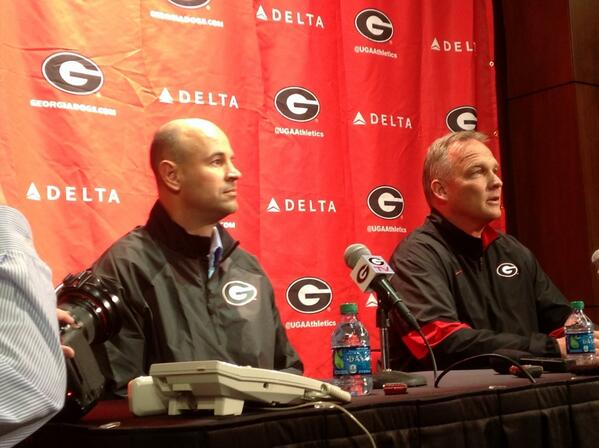 So, I finished drinking the Kool-Aid last night – quite tasty, thank you for asking – and finally stopped pinching myself before I went to bed.

And in the cold light of day, I’m still stunned.

The speed at which this came together continues to amaze me.  A week ago, we’re arguing with each other about how Richt’s wish for defensive continuity is going to play out this season.  Grantham flees Athens last Sunday, leaving us to fret about the process for finding his successor, as well as who that successor will be.  But we barely had time to fret!  (Schlabach told 680 The Fan yesterday that Richt learned of Grantham’s move at four o’clock that day and had settled on Pruitt as the guy to go after by five.)

Mark Richt snatched victory from the jaws of malaise.  He is receiving deserved acclaim for acting so decisively.  In fact, I’d call it near-universal acclaim.  Outside of the FSU fan base, I honestly can’t find any criticism of the move, not from the media, other coaches, even that part of the fan base that has been steadily critical of Richt (when’s the last time that happened, eh?).

I mean, consider where things have wound up now that the dust has settled.  Georgia has swapped Todd Grantham for Jeremy Pruitt, literally, for the same contract terms, and gotten a defensive coordinator with a better recent track record on the field and who is a better recruiter.  And in the bargain, has gotten all that without having to make a major disruption to its defensive scheme.  That’s about as good as it gets.

It’s so good that it’s making me a little nervous, honestly.  Since when does Georgia get this golden?  This is the home of funky karma and playing it safe and slow.  But I’ll put that aside for now.  Let’s look at a few specifics that are worth getting excited about.

There was obviously plenty going on behind the scenes that we’re never going to be made fully aware of, but that’s water under the bridge now.  The program is in a better place today and that’s something to celebrate.  At least until we want to start complaining about what’s being done to fix the problems on special teams, that is.  But that can wait.  Let’s savor the moment for a little while, okay?

“The NFL has always been a dream of mine.”

Nearly 30 SEC underclassmen are leaving school early for the lure of the NFL draft.  Ten of the 14 SEC schools will have players who are leaving early.  Georgia isn’t one of those.  (Sometimes, inexperience has its pluses.)

With the way rookie contracts are capped these days, if you’re a junior who’s a major talent, it’s almost crazy not to leave as soon as you can, because the big money at the next level doesn’t come until you reach your second contract.  If you look at Paschall’s list, you can see how that incentive is playing out.  TAMU is losing its two best players.  South Carolina, which was also a pretty young team in 2013, takes a major hit on the defensive line.  Florida will feel some pain in the secondary.

And then there’s LSU.  The Tigers lost 11 underclassmen last year and lose another seven this year.  They’ll still roll along.  Miles probably deserves even more credit for being a very good recruiter than he already gets.

In any event, early attrition can’t be a bad thing for Georgia’s 2014 chances.

Believe it or not, there are other happenings in the world of college football beyond the Pruitt hire.