One down, two to go

It’s being reported that Georgia’s made its first hire to replenish the defensive staff:  Kevin Sherrer, the defensive coordinator at South Alabama this past season.

He sounds like a man who’s followed in Jeremy Pruitt’s footsteps.

Sherrer, 40, played tight end at Alabama from 1993-95, and was later a graduate assistant for the Crimson Tide (from 1998-2000), and was later the defensive coordinator at Hoover High School from 2005-09. He then served as a director of player development at Alabama from 2010-12, before taking the job at South Alabama.

The connections between Sherrer and new Georgia defensive coordinator Jeremy Pruitt are extensive: They were teammates at Alabama, worked together at Hoover, and were both at Alabama in recent years. Pruitt was at Alabama from 2007-2012 (the first three seasons as a player development coordinator), and was at Hoover from 2004-06.

So it’s another guy who comes out of the Alabama high school scene and who has extensive experience with player development under Saban.

Looks like Mark Richt is going all in on The Process.

UPDATE:  Hair does not seem to be a prerequisite for a position on Georgia’s defensive staff. 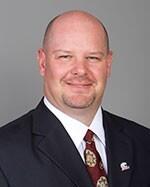