Instead of wondering if student-athletes can pay taxes…

… a better question might be whether schools are prepared for this shot across the bow:

The House Ways and Means Committee, under the direction of chairman Dave Camp (R-Mich.), is circulating a draft of what could become a bill known as the Tax Reform Act of 2014. Under one provision, tax-exempt organizations – including, committee staffers say, nearly all public and private colleges and universities – would be subject to a 25% excise tax on compensation in excess of $1 million paid to any of its five highest-paid employees for any given tax year.

It’s not exactly chump change, either.  The non-partisan Joint Committee on Taxation estimates the excise-tax provision would increase tax revenues by $4 billion from 2014 through 2023.

Do I think it’ll pass?  Maybe not.  Do I think it will stir the already roiled waters the NCAA is attempting to navigate?  You tell me.

But the staffers are well aware of its potential impact on colleges and what they pay high-profile college coaches, who are among the nation’s top-paid and best-known public employees. And reflects growing skepticism about big-money college sports programs’ place at institutions that enjoy broad tax protections and whose donors gain tax benefits from their gifts.

“Large salaries at non-profit organizations beg the question: Are dollars really going to the core mission — whether that be charitable work, providing health care or educating students — or is that money serving another purpose?” committee communications director Sarah Swinehart said in an e-mail to USA TODAY Sports. “The draft is an opportunity to discuss whether or not the tax code should provide an incentive for multi-million dollar salaries at non-profits.”

When you start talking tax code, you start scaring the crap out of university administrators.

I hope somebody asks Emmert about tax code incentives at the Final Four presser.

Filed under It's Just Bidness, Political Wankery, The NCAA

Q: Last year the Star position was played primarily by Josh Harvey-Clemons, who was 6-foot-5, 215 pounds. How has a 5-9, 183-pound guy like Green been able to fill the role so well?

Any DB handling inside receiver coverage has to be an improvement over an ILB.  Thanks for giving me hope, Coach.

#UGA and ILB Paris Bostick have "mutually agreed' he should transfer.

Name that caption, now I can finally say it edition

ESPN’s Andrea Adelson sits down to get the real poop from new Louisville defensive coordinator Todd Grantham in what looks like a very large, very empty space. 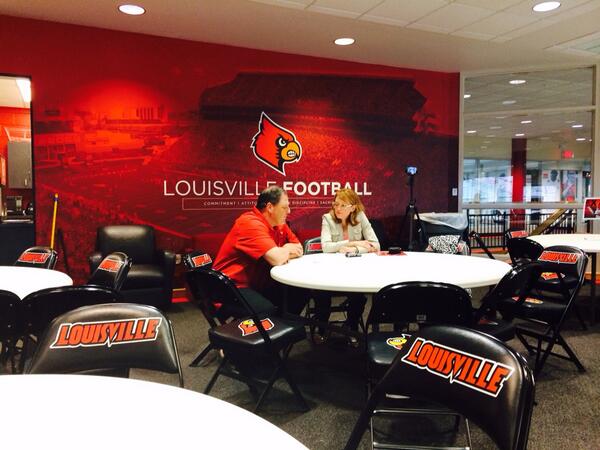 Have at it in the comments, peeps.

Dennis Dodd gets all “the times, they are a-changing” (seriously:  “At some point in recent years college athletics became a Bob Dylan protest song.”) on the NCAA’s ass.  It’s an easy mark – see what I did there? – when your target is tone-deaf like this:

Emmert will most likely endure probing questions Sunday when he conducts his annual state of the union press conference at the Final Four. But in the current big picture, he admittedly has nothing more than a bully pulpit.

It’s the way his term has played out. Emmert’s mandate to reform from the NCAA board of directors went flat. Witness the overreach at Penn State, the screw up in the Miami case and the failed 2011 presidential summit. His organization is now attempting to restructure from within before the courts or Washington intercede.

“I’m apprehensive in that the system right now serves 450,000 student-athletes and provides remarkable opportunities for them,” Emmert told the Indy Star. “Should that model be blown up, yeah, it would be a significant loss for America. So, of course we want to continue to support the collegiate model of athletics and think it’s worth saving. Others disagree.”

Yeah, that presser’s gonna be awkward.

No question that the guys in charge of college athletics have been slow to recognize the need for change.  But even taking into account the role inertia – the most powerful force in the universe! – plays in big organizations that have been used to getting their way for decades, there are a couple of structural flaws that make it even more difficult for the NCAA and its member schools to react nimbly to the changing times.

One, unlike the pro leagues, college athletics don’t form a monolithic structure.  Instead, you have a bunch of conferences that compete with each other commercially, have separate rules and management and have had no reluctance to raid each other for members over the past few seasons.  What limited common purpose they share is overseen by an organization that is distrusted to some degree by much of its membership and derives a part of its authority from the control it exercises over a lucrative basketball tournament.  Some of what the NCAA has to do, then, is akin to herding cats.

That’s not an easy task in and of itself.  But it’s even more difficult when you consider the second structural flaw:  its fearless leader, Mark Emmert.  I’m not sure about the vetting process, but somehow the schools accepted a guy in the head slot with this kind of track record:

Either way, he’s a winner.

By the way, the next potential nail in amateurism’s coffin is scheduled for April 25.  Be prepared for another round of how America lost.

Filed under It's Just Bidness, Look For The Union Label, The NCAA

I'm going to talk to the NCAA and see if we can get 15 more practices. Today is practice #9. It's going fast -better make Em count.

“I know they (Georgia Tech) are really going to be up there.”

If this doesn’t immediately bring this to mind…

… somethin’ be wrong with you.

By the way, does it seem like Thompson’s coach is enjoying the visitation process even more than Thompson is?

Georgia’s getting a lot of favorable publicity over sending some recruits hand-drawn portraits signed by Coach Richt.  (Although you might want to get your facts straight about Alvin Kamara’s present whereabouts, ESPN dudes.)  My favorite bit from that piece:

One rival SEC assistant coach said he wished he thought of the portraits and immediately sent his recruiting staff to come up with something “better.”

One thing, though.  John Infante’s got a little cold water to toss on the effort.

RE: the Georgia pictures, if that is being justified as institutional letterhead, NCAA AMA staff needs to issue an interp ASAP.

You can’t give those to a prospect on a visit or send it as an attachment to general correspondence. Calling it letterhead shouldn’t matter.

If that turns out to be a real problem, I hope it’s nothing worse than one of those “it was worth it” secondary violations.

Musical palate cleanser, don’t nail yourself to a cross edition

I read an interview the other day with Nils Lofgren about the E Street Band finally getting into the Rock and Roll Hall of Fame that made me reflect a little upon his career.  He’s had an impressive run, not only playing with Springsteen, but also being an integral part of Neil Young’s early solo work.  Lofgren played on Crazy Horse’s first (and excellent) album and started his first group, Grin, as a teenager.

I’ve seen him live on several occasions (he’s from the DC area and played Charlottesville often when I was in college).  He used to feature a trampoline as part of his act back then.

His name was in the mix as a replacement when Mick Taylor left the Rolling Stones.  He didn’t get the gig, but maybe the process left an impression.  From 1976 and his first solo album, this is one of my favorite songs of his, “Keith Don’t Go (Ode to the Glimmer Twin)”.