Another clue to the new defense

“Linebackers are more close,” he said. “They’re like three yards away so it’s like so hard. Like leads or zones, you’ve really got to press your track to get them boys flowing just to get the line to block them because if not then they’re going to be right there on you.”

It’s aggressive.  It also puts a lot of pressure on the linebackers to make solid tackles and on the players in the secondary to make sure they’re spaced properly behind the linebackers.  Seeing as these have never been strong suits of recent Georgia defenses, at least not on a consistent basis, it sure sounds like the defense is going to be living in interesting times this season.

Hoping for a short learning curve…

You know the schools’ argument for amateurism is running on fumes when you get to this level of hairsplitting:

“The fact is we have student-athletes in all sorts of sports that, if you apply any form of value to their labor, you cannot pay football players and not pay gymnasts just because the football player has the blessing of an adoring public,” Bowlsby continued. “That’s the only difference. There are a lot of student athletes that are worthy.”  [Emphasis added.]

Put it this way.

“Revenues derived from college athletics is greater than the aggregate revenues of the NBA and the NHL,” said Marc Edelman, an associate professor at City University of New York who specializes in sports and antitrust law. He also noted that Alabama’s athletic revenues last year, which totaled $143 million, exceeded those of all 30 NHL teams and 25 of the 30 NBA teams.

Now let’s play a little with that quote from Bowlsby.

“The fact is we have organizations in all sorts of sports that, if you apply any form of value to their labor, you cannot pay Alabama and not pay an NHL team just because the football school has the blessing of an adoring public,” Bowlsby continued. “That’s the only difference. There are a lot of sports leagues that are worthy.”

As a former wrestler, how does that sound to you, Bob?  If the management of a pro basketball team or pro hockey team works as hard as the Alabama athletic department, do you think Bowlsby would suggest that their revenues should be equalized, even though their economic popularity isn’t?  Not on your life.  So why should a football player be expected to relinquish his value in a way that Bowlsby would never consider doing?

You know, if the assholes running college athletics had to live by the same amateurism standard to which they seek to hold players, this whole charade would have been amicably settled a long time ago.

“I think we’re back more to the basic stuff.”

If adapting your scheme to the talent at hand instead of the opposite is the sign of an excellent offensive coordinator, what then should we say about the genius?

The best laid plans of mice and Georgia fans

You may not have heard, but the crown jewel of Paula Deen’s brother’s empire, Uncle Bubba’s Oyster House, abruptly announced its end last week.  Aside from unexpectedly throwing Uncle Bubba’s workforce onto the unemployment line, the closure has led to putting another person in a tough spot.  She deserves better, too.

Colleen Sheffield booked her reception at Uncle Bubba’s for her October wedding. Now she’s scrambling to find a new venue.

“I’ve called 80 people, and I can’t find a venue anywhere because October is a prime wedding month,” said Sheffield.

And it’s not just the month that is the problem.

“I picked a bye week for Georgia [football],” she said. “Like any Savannah Southern girl, you plan it around SEC football.”

Amen to that, sister.  Hope things work out.

As if you needed a reminder…

Don't forget this Saturday is G day. Weather is supposed to be spectacular. See you there!

I watched a little of Ole Miss’ spring game Saturday and noticed a couple of things.  First, Jeremy Liggins may be even more enormous than billed.  (He’s a freakin’ hulk, although he appeared more trim than the linked photo shows.  I’m not sure he’s particularly mobile, but he looks like he could be a weapon in short yardage situations.)

Second, the game was more like a controlled scrimmage.  I don’t mean that in the sense that all spring games tend to be glorified scrimmages.  Ole Miss ditched the standard game format for some hybrid arrangement where the offenses operated out of set situations and one side was awarded a point for achieving a goal or for preventing one.  Call me old-fashioned, but it lacked emotional impact, which is kinda what you’re inviting the fans for.

So call the traditional set up something else I’ll be grateful for on Saturday.  Just like so many other things these days, I’ll take it as long as I can get it.

Is college athletics about to begin eating its own?

Haves vs. have-nots, the story of college sports.  More than anything, it’s the essence of what the NCAA is struggling with right now.

And here that is, boiled down to one short paragraph:

“Our world is not the same in a small program. We don’t have the resources,” said Rita Cheng, chancellor at Southern Illinois. “As long as we know that we can be competitive in the tournament and that our athletes can have opportunities, it is appropriate for us to say, `Your world is different than our world.'”

But what happens when the power conferences no longer care what you think is appropriate, Chancellor?

That’s why those top 65 BCS schools know they could get along just fine without their smaller buddies. They could form their own division, or their own NCAA. Those 286 give the NCAA Tournament some of its Cinderella charm. They also drag down those top 65 schools — the Big 12 among them — who are about to run the NCAA.

“There are a number of points of differentiation between the 65 of and the rest of Division I …” Bowlsby said. “There’s stuff we’ve tried to get done for years. It’s an accumulation of frustration.”

Frustration from the guy, mind you, who proclaimed the pros were “irresponsible” for not taking kids out of high school.  And who also had this to say about possibly shortening the basketball season to a one-semester sport:  “Some of our TV partners would be apoplectic to actually think about such things,” he said.  Not ’til you actually try to do something about it, bub.

The bravado may be false, but the NCAA’s dilemma is anything but.  How do you hold things together enough to keep your goose laying those golden eggs, while giving the big boys more freedom to spend the revenue they generate as they see fit?

Another quick story: One BCS conference official proposed a $55 per day per diem for players at bowl games. During the legislative process, the lower-resource schools balked. So that BCS administrator compromised, going backwards in increments of $5, sort of like an auction in reverse. Finally, he was bargaining dollar by dollar.

I don’t think that’s gonna cut it, quite frankly.

Making matters worse, they’ve finally woken up to the realization that their precious student-athletes aren’t operating in a vacuum.  Those kids may not understand where every penny goes, but they’re aware that there’s a bunch of cash being haggled over.

Emmert’s organization would certainly appear to have the money to make those changes. The NCAA is expected to report revenue of $912,804,046 for 2013 — more than 80 percent of that derived from the Final Four. Yet student-athletes are currently denied so much as a single penny from that golden pot, or from any other revenue stream, including jerseys which bear their numbers or video games where the real-life players strongly resemble the video images.

The riches are so vast that Donovan’s talk of free hamburgers makes one realize that the NCAA could theoretically buy a McDonald’s franchise for every player from all 68 men’s teams that began March Madness this spring, since a franchise runs between $1 and $2 million and the NCAA will report close to $1 billion in revenue for 2014.

“Of course you see it,” said UConn coach Kevin Ollie of the contradictions present in the current NCAA model. “We weren’t getting paid (when Ollie was a Connecticut player), but you’d see our jerseys getting sold. Hopefully we can keep the integrity of the NCAA and the student-athletes, but I’d really like to see us provide health care, for instance, until they’re able to get a secure a job after college. Or maybe a 401K, something they can fall back on when their playing days are over.”

That sound you just heard was Rita Cheng choking.

I’ve said before that the real challenge behind postseason expansion was whether Delany, Scott, Slive and Company were up to the task of calibrating more playoffs without losing a penny of regular season revenue.  It looks like we may discover how good these guys are at keeping all the balls in the air sooner than I expected.

I’ve seen a little 2013 weight-related criticism directed Number Three’s way lately, and I have to say I’m not really getting it.

He’s ridiculously explosive throughout that clip, starting with that 75-yard TD run against Clemson.  Then there’s the catch in the flat against Florida when he outruns most of the Gators’ defensive backfield.  But even some of the plays where he picks up less yardage are displays of his burst.  Check out that screen pass against LSU at the :30 mark, when he turns up field and just explodes through the line of scrimmage.  He didn’t seem to have any problem elevating himself at the goal line, either.

Did Gurley have conditioning problems?  Yes, especially later in the season when he was coming back from missing games due to the ankle injury.  And he was clearly laboring because of the ankle late in the season, most notably in the bowl game.

Don’t get me wrong.  I don’t have a problem if he wants to drop a few pounds, as long as he’s comfortable doing it.  But the other thing that comes across in that clip is his power.  That combined with his top end speed is what makes him such a special player.  And I’d hate to see him drop so much weight that it compromises his ability to plow through defenses when called upon to do so (given what’s expected out of the offensive line, I doubt the need for that will lessen this season). 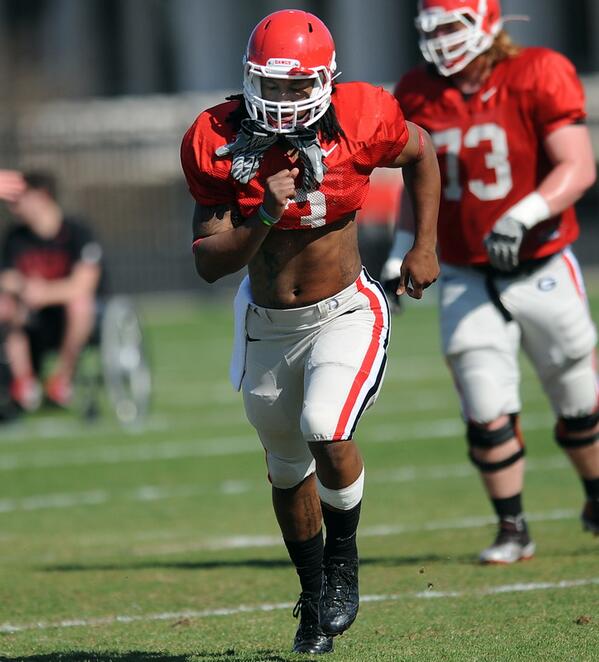 … I realize it’s probably not worth arguing about.

With the news that the commissioners of the five major conferences met in Chicago recently with a team of  – as in “at least” fifteen – lawyers to discuss a recent antitrust lawsuit filed against those leagues, is it fair to say that Mark Emmert’s come up with the epitaph for college football as we know it?