“They do it all at Georgia.”

Can’t hurt on the recruiting trail.

All you need to know about Northwestern’s 55-page opus appealing the NLRB ruling is this one sentence on page twelve:

Contrary to the Regional Director’s findings, Northwestern scholarship football student-athletes are not “initially sought out, recruited and ultimately granted scholarships because of their athletic prowess on the football field.”

Filed under Blowing Smoke, Look For The Union Label

Clap for the Bag Man

Trust me, this is the most epic thing you’ll read all day.

As many of you continue to bask in the warmth of amateurism, here’s reality in a couple of sentences:

“If I told you right now the [team] would win the SEC this fall and go to the Playoff, but only if you gave me 10 grand, would you do it?”

“Shit, man … will you take a check?,” the bartender asks. “But if you could really do that, I’d probably get the cash together in a day or two.”

Leave it to Nick Saban to describe the job of the guy who was named the 2010 Rivals.com Recruiter of the Year, made $350,000 a year as an assistant coach at Washington and is the latest addition to the multitude in Tuscaloosa as “… an intern that helps us some in recruiting”.

I do believe people are starting to freak out a little over unionization and the NCAA’s perceived incompetence.  Maybe that was Emmert’s plan all along.  Crazy like a fox!

Filed under It's Just Bidness, Look For The Union Label, The NCAA 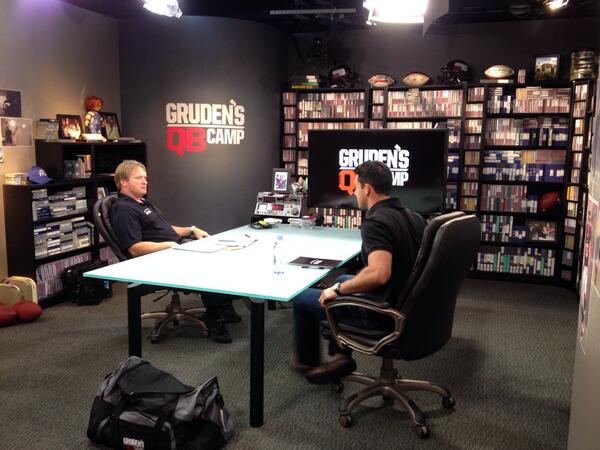 Ohhhhhhh… you thought they were talking about Aaron’s employment opportunities.

AM’s appearance on Gruden’s QB Camp is scheduled for tonight, by the way.  Based on the clip I saw yesterday, it looks like he’ll be breaking down some plays from last season.

UPDATE:  I take it this is a compliment.

Gruden on @aaronmurray11 in relation to other QB's he's analyzed the last 5 years with his QB camp: "He's at the top of the food chain."

More Gruden on @aaronmurray11: "He's got deep ball accuracy, He's got tremendous anticipation & touch… He'll be the steal of this draft."

“I think there was a tendency at times — and I’m just saying this being brutally honest, because I know I fell into it sometimes on the punt team — to where you ended up coaching the whole team,” Lilly said. “You had help, you had guys, but you didn’t use them as well. You know how that is. Guys are all of a sudden (like), ‘Well, he doesn’t need my help.’

It’s nice they’re trying to address the problem, but where the hell was the accountability last year when special teams play was such a hot mess?