I apologize to your retinas. 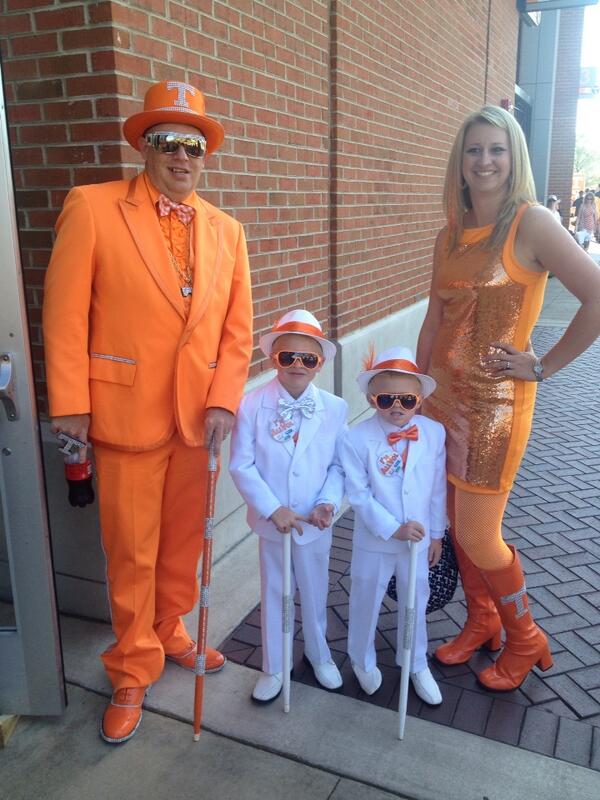 Keep the child abuse jokes to a minimum. If you can.

Adventures in G-Day expectations: “We’re not going to try and trick anybody. We just want to see who can play defense.”

Yeah, I know there’s a lot of downplaying going on in advance of today’s scrimmage.

Coach Mark Richt said he thinks Pruitt’s unit will probably be pretty vanilla since G-Day will be televised on CSS and fair game for opponents to scout. But Richt said the Bulldogs will play “some good, solid fundamental defense.”

You know what?  I could friggin’ live with that.

Aside from whatever progress Pruitt has been able to coax from his troops, I’ll be keen to see how the offensive line’s work in progress is… well, progressing.

And I’ll be rooting for J.J. Green.

The weather’s not gonna let you down today, so show us what you’ve got, man.

Today is the first day of the rest of Jordan Jenkins’ Georgia career.

A couple of Jordan Jenkins quotes for you to sample this morning:

A dose of humility, a little bit of relief in playing a simplified scheme and a hunger to improve.  That’s the kind of happy talk I can appreciate.

Nobody expected Judge Wilken to grant either party’s summary judgment motions, which she didn’t.  What she did do, though, was kneecap much of the NCAA’s position.  Consider the following:

All told, that’s pretty brutal.  As plaintiffs’ lead counsel put it, “The opinion, the way we read it, does not leave a lot of credence to amateurism and shows it’s going to be their burden to establish it at trial…”  The judge tossed the NCAA’s First Amendment and Title IX defenses, which means it’s now going to have to convince a jury of its peers (heh) that somehow it’s okay for schools to pull in billions from commercial marketing of competitive sports while preventing athletes from profiting off their names and likenesses.  Maybe the NCAA can screen Chariots of Fire for the jury.

Oh, and that’s not all.  It may be time for ESPN and its brethren to get a little nervous, too.

In other words, every existing broadcast deal out there, including those conference network partnerships, may be a nullity, because nobody bothered to license the student-athletes’ publicity rights.  Chaos, baby!

If I’m one of the plaintiffs’ lawyers, I’m having a real hard time suppressing my glee today.  Donald Remy, however, sees no reason to panic.

In a statement, NCAA chief legal officer Donald Remy said the association disagrees with the ruling that the NCAA cannot justify restraint due to women’s sports and other men’s sports.

“We have confidence in the legal merits of our case and look forward to presenting it at trial,” Remy said. “In the meantime, we are evaluating our legal options with respect to the decision.”

What he should see is a reason to tell Mark Emmert to settle, but I wouldn’t hold my breath on that.  Trial starts June 9.

“Sometimes they may know what to do, but they’re second-guessing themselves.”

A little pre-G-Day perspective for you guys:  do I really need to say more about Louisville’s spring game than this?

The offense piled up 951 yards and 11 touchdowns in the first exhibition appearance of coach Bobby Petrino’s second regime, showing off an abundance of weapons in the receiving and running back corps.

Well, yeah.  It could have been worse.

Gardner completed eight passes for 20 or more yards and would have had a ninth if a 66-yard bullet to Parker wasn’t called back for an illegal-formation penalty.

Neither Grantham nor his towel were available for comment.