The difference between motivation and uncertainty

When Jeremy Pruitt refuses to name defensive starters or says that starting positions are up for grabs in the fall, you suspect a lot of that is to keep his charges on their toes, giving maximum effort.

When Will Friend says, “The (left) guard was here and there with people. I guess that’s why you practice. I guess you gotta figure it out in August”, you suspect it’s because he really hasn’t identified a viable option for the position.

In Tallahassee, a football player can get caught stealing, be cited for a misdemeanor, plead out, do some community service and be back on track with his life in a matter of days.

In Athens, the coaches can’t get through the disciplinary phase of the four kids who were arrested for theft by deception and charged with misdemeanors in March because… well, because Athens-Clarke County.

But there may be more to the hold-up than Richt looking for a strategic advantage against Clemson. The fact is, the players’ cases have yet to be adjudicated by the Athens-Clarke County court system. What happens there could have a bearing with what happens with football going forward.

Arraignments for the four players are expected to be set for the next session, June 3-5, according to Athens-Clarke County solicitor general C.R. Chisholm. The cases were originally scheduled to be heard April 17, but Chisholm said Monday he had to move them back simply because of the volume of documentation involved. He said investigators submitted a phone-book size file on the case. With all the other misdemeanor cases he has to prosecute, he simply hasn’t had time to review it all.

But Chisholm vows he’ll get to it soon.

A “phone-book size file on the case”?  Good grief.

Just because you are a character doesn’t mean you have character. 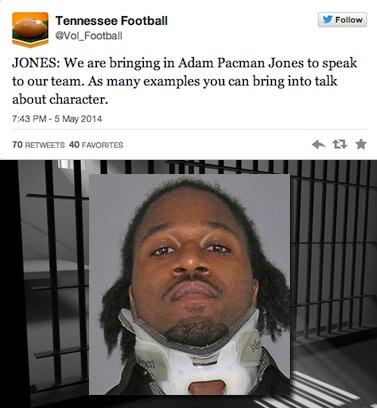 Reader poll: you pays your money and you takes your choice.

Yesterday’s post about the eight-game SEC schedule led to a mini-debate in the comments about how Georgia would be short-changing itself if it went to a nine-game conference schedule and kept the game against Florida in Jacksonville.  The problem I have with the argument that it would be bad for Georgia is that it asks me to adopt a perspective that I shouldn’t be expected to take.

What I mean by that is that I’m not the AD.  Nor the head coach.  Nor the school president.  I don’t spend money on Georgia football as an investment.  It’s not a business decision for me.  I’m a fan.  College football is entertainment for me.  That I should buy in to the idea that I’m supposed to spend my money in a way that benefits the program first, local businesses second and me third is just bizarre.  If I go to a concert, I don’t appreciate the performance more knowing that the venue or the promoter is making a bigger profit.  So why should I accept scheduling Charleston Southern on a Saturday in late November as something that’s good for me to spend my entertainment dollars on?

Even more than that, why am I supposed to accept the underlying premise for that – Greg McGarity’s scheduling dichotomy?

“While it might have been exciting to fans, it did not yield a championship,” McGarity said. “So one could argue that in order to put yourself in the best spot, what model works best.”

When it comes to the four games not against SEC opponents, I can have entertainment or I can have wins, but not both?  Screw that.  Why should Butts-Mehre not be held accountable for doing what it can to give me both?  Why can’t McGarity share this perspective?

Tennessee athletic director Dave Hart was a proponent of the SEC moving to nine conference games, but that wasn’t the result of the vote.

He cited the changing dynamics on college football in an interview with The Sports Animal 99 in Knoxville, but has accepted the conference decision to stick with eight.

“I favored it because of the shift in the paradigm,” Hart said. “We haven’t had a year where we’re in a playoff mode. Strength of schedule remains to be seen just how strong the committee weight they will put. We think it will be considerable weight. Those who did not favor nine would argue that our strength of schedule is already very strong. There are other conferences that have gone to nine. … I just looked at it from a fan perspective and the changing paradigm in intercollegiate athletics and college football.

Most of the big issues college football faces right now involve us fans peripherally.  But this one doesn’t.  It’s about us and what we’re willing to put up with.  I shouldn’t have to defend Dawg fans enjoying the entire Cocktail Party experience – damn, that’s a feature about Georgia football, not a bug.  And I shouldn’t have to accept a pathetic 2015 home non-conference slate because that’s what McGarity thinks is in everyone’s best interest.

But maybe that’s just me.  So here’s a reader poll.  I’d also love to hear your comments about this.  Particularly those of you spending your bread on Georgia football games.

Outside the hedges: 10 favorites

Yesterday I gave you my list of my ten favorite games I attended in Sanford Stadium.  Today, you get my favorite games away from Athens.  As I went over the choices, I realized I’m a pretty lucky guy, because I’ve seen some great, great games (some examples of games I left off my list:  2002 and 2005 SECCGs, 2003 Georgia-Clemson).

Anyway, here’s what I’ve got, again in chronological order:

1980:  Georgia 26 Florida 21.  Is there anything I really need to say about this game that hasn’t been said a thousand times before?

A lot of bourbon got wasted on that play.

1981:  Georgia 17 Notre Dame 10.  National title, dude.  I sat in the end zone behind the Notre Dame players who botched the kickoff that led to one of Georgia’s score.  Back in the day when you could rush the field after the game.

1982:  Georgia 19 Auburn 14.  Gawd, what an accumulation of running back talent.  Again, sat in the end zone where they broke it up in front of me.  I think that’s the last time I walked on an opponent’s field after a road win.

1985:  Georgia 24 Florida 3.  No, there wasn’t as much on the line as the 1980 game, but I love this game just as much, if for no other reason than Florida reached number one in the polls for the first time in school history that week, only to get smoked by the Georgia running game and Muddy Waters.  It probably wasn’t a coincidence that it was the most inebriated I’ve ever been at a Cocktail Party game.

1997:  Georgia 37 Florida 17.  First blood, baby.  When Robert Edwards broke the corner and scored to put the Dawgs up comfortably, it was the closest I’ve ever come to passing out at a Georgia football game from sheer joy.  Edwards was the man that day.  Spurrier swapping quarterbacks throughout the game was priceless.  (Too bad the Dawgs came back to Athens the next week and screwed the pooch against Auburn.)

… and I wasn’t cold anymore.

2009:  Georgia 30 Georgia Tech 24.  We run this state.  The game that started Paul Johnson’s denial of the importance of the series.  Oh, and nice drop, BeBe.

2012:  Alabama 32 Georgia 28.  It broke my heart, but it’s still one of the greatest games I’ve ever seen.  I’ve never been prouder of the effort given by a Georgia team.

Oh, and the idiot woman sitting next to me who left before the interception call was overturned? You’re still an idiot.

2013:  Georgia 41 Georgia Tech 34.  Trust me, it never gets old. Especially when Tech finds a way to blow a 20-0 lead.  And it’s the only time I’ve walked out of BDS after a Georgia win without being abused by a single Tech fan.

So there’s mine.  And yours?

Is anybody going to teach the SEC a scheduling lesson?

Allen Kenney thinks the WWL might choose to push the SEC to reconsider its adherence to an eight-game conference schedule.

Now imagine a panel of ESPN talking heads hammering viewers and selection committee members with those talking points on Tuesday nights when the committee’s rankings are unveiled. (Great part about Tuesday night: No NFL game to go up against.) Now imagine Kirk Herbstreit doing that on a Saturday night broadcast from Norman. Now imagine Damon Huard talking that noise on a Wednesday afternoon edition of College Football Live. And on and on…

Does the committee snubbing ‘Bama in favor of one of the power conference champs really seem so unrealistic in that scenario? In fact, how many of the “second” SEC candidates since 2006 actually seem immune to that kind of politicking by the debate embracers?

And since we’re dealing in backstabbing hypotheticals, think of the outcry in SEC country if that went down. If it happened multiple times, Mike Slive would need an armed militia to get around Birmingham. Unless the other conferences agreed to expand the playoff before the term of the four-team joint is up, try to find a better solution than adding another conference game.

Seeing as ESPN already owns the SEC media rights for the next 85 years or something, Mickey might even get those extra conference games for free.

Me, I’m a little skeptical about Mickey moving things.  Not that the talking heads won’t stir the pot, but I don’t think ESPN expects to get something (better broadcast inventory for the SEC Network) for nothing.  If it did, we’d already be hearing about that.  As for the pot stirring, I’m guessing Slive’s already taken that into consideration and isn’t particularly concerned.  And why should he be, when Jeff Long is chairing the selection committee?

There’s another way to skin the cat, one that I suspect most of us would cheer.  Consider the question asked by UCF’s AD as he ponders the scheduling world made by Mike Slive’s word:

“I don’t really have an issue with requiring a ‘Power 5’ game; my question is why do they continue to schedule FCS?” Hansen said. “How is that going to be counted? In basketball a game against a Division II school doesn’t count in the RPI. It’ll be interesting to see how that is (viewed by the committee), but that’s the thing that’s a little more perplexing.”

Yeah, I’d say.  So what happens if the selection committee members were to announce that FCS games wouldn’t be counted in their deliberations?  I bet that would move the scheduling needle in a hurry.

If you’re looking for affection and support from the public, fellas, forcing schools out of the cupcake hosting business would get you a helluva lot more love than a weekly rankings show will.

Filed under BCS/Playoffs, ESPN Is The Devil, SEC Football