“He’s had some chronic hamstring issues, which we probably need to re-evaluate what we’re doing with him,” Richt said after Saturday’s spring game. “And how we train him. I mean if there’s something going on. And he’s probably gotta take some ownership of it too. If you’ve got a deficit in some areas you might need to spend a little more time with flexibility stuff in the offseason than another guy would have to.”

Partly in response to the injury issues of a year ago, Georgia football this offseason has “just started a program called Fusionetics,” Richt said last week.

It’s a way to perhaps reduce the risk of injuries in the fall with the way a player conditions now.

“What the players will have is a way on their own to work on some of their deficiencies and get them in balance better,” Richt said. “Our strength staff and our training staff are both on the same page on the type of exercises these guys need to do to get them in better balance where they can have less chance of injury. So that’s going to be a big thing.”

Obviously, this is more than just about Matthews.  But it’s interesting to see Richt push some of the responsibility players’ way.

This week in concern trolling

First, Chip Towers, then Jeff Schultz – the AJ-C is upset that Todd  Gurley is acting like a college kid.

OK, Todd Gurley skateboarding down Sunset Blvd. in Los Angeles isn’t on the same level as him diving through a ring of fire. But you can understand why when the Georgia running back posted video of himself on Instagram skateboarding down the sidewalk along a major street with cars going by, and a picture of himself sitting on a balcony ledge – it was difficult to tell how high the drop-off was – some Georgia fans might have been rattled. Gurley and a strong running game represent the Bulldogs’ best hope for a strong season, especially with an inexperienced quarterback. At the very least, I’m guessing coach Mark Richt will say something to Gurley about what he posts on social media.

“… a picture of himself sitting on a balcony ledge” has some Georgia fans rattled?  Hey, we’re a pretty tough bunch.  If we could survive this – better than the AJ-C did, by the way – I think we can handle balcony ledges.  I bet Mark Richt can, too.

For our next trick…

Just a reminder of how prescient some of the preseason mags are: 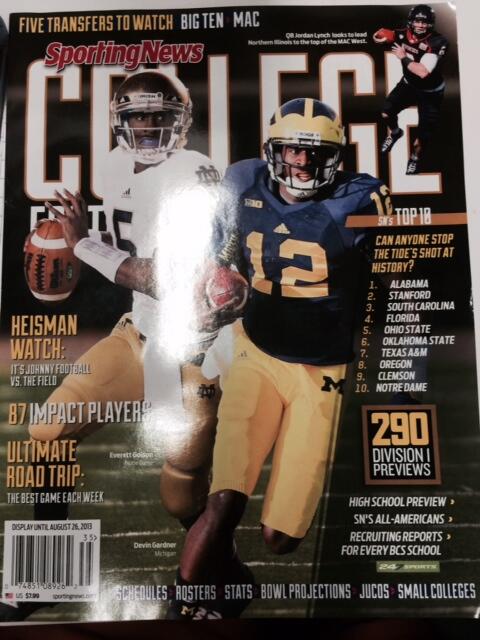 The other side of autonomy

This week at its annual spring meeting, SEC higher-ups will discuss the evolving NCAA structure where a handful of conferences — the SEC prominent among them — will move to their own strata and establish a large degree of autonomy.

The SEC, Big Ten, Big 12, ACC and Pac-12 will continue to be members of the NCAA, but they’ll operate under a separate umbrella with their own set of rules and regulations. In short, they’ll develop their own way of doing sports business.

… that gave me some pause for thought:  namely, how far does this five amigos approach go?  We’re all assuming this is an attempt by the haves to free themselves from the overriding control of the have-nots, but why should we assume there’s a all-for-one, one-for-all spirit among the Big Five?  Certainly there are plenty of areas where mutual support and cooperation make sense – the antitrust lawsuits and the threat of unionization have made bedfellows out of them all – but there are plenty of areas where you’d think competition or regional preference would dictate otherwise.

And, yeah, some of those matters, like conference expansion, have been around for a while.  But not in an era of weakened central authority (and, yes, I also know that conference expansion isn’t under the NCAA’s jurisdiction, but bear with me here).  The last time the NCAA relinquished control over a major area was when it lost the antitrust case over broadcast rights.  I don’t think it’s an understatement to note that the consequences to that have been as significant as anything that’s ever occurred in college athletics.  Who’s to say how dramatic the consequences will be this time?  And who’s to say that if an issue’s important enough, that the template hasn’t been set for one conference to assert that autonomy isn’t just reserved for pushing back against mid-major conferences?  Or do you really think Slive and Delany will join hands and sing Kumbaya for the rest of their careers?

After that first College World Series season, Jones interviewed in Athens for the University of Georgia head coaching job. As he toured Athens during the trip looking at housing options with Vince and Barbara Dooley, Jones pointed out a house that he thought was nice. Barbara Dooley noted it was the house of former UGA head football coach Jim Donnan.  Jones asked what happened to Donnan. Once it became clear that Donnan was fired after four straight Top 20 seasons, Jones knew right away that the grass isn’t always greener and decided to remain at Tulane for the long haul.

Probably just a bad sales job by the Dooleys, right?

Again, I mention this not as an argument against dismissing a head coach who isn’t performing.  But as a cautionary tale about how skillfully Butts-Mehre would handle a post-Richt job market, it bears keeping in mind.