Inching closer to the Irish

Georgia and Notre Dame are moving closer to a football series “later this decade,” Georgia athletics director Greg McGarity said Tuesday. And while no deal is done, and McGarity cautioned that there could be snags, he made clear that he would be eager for it to happen.

“I think it’s an opponent we’ve played, what, one time? 1980? For our fans to be able to go up to South Bend, and for our fans to see Notre Dame play between the hedges, I think from a national perspective it’d be off the charts, as far as interest, as far as intrigue,” McGarity said. “That would be something out of the ordinary that our fans would be very, very excited about.”

If they actually pull this off, what are the odds VanGorder will still be there when they play?

Ah, hell. Thanks for reminding me.

File this under “Stuff I Don’t Need To Hear Right Now”.

Saban: "Everyone wants to see best 4 teams play” but worries a team that loses conference title game won’t get in playoff (UGa in 12)

Nick Saban: "When we played Georgia in the championship game a couple years ago, that was the toughest game we had (that seasson.)"

Name that caption, a penny for your thoughts, Boom edition 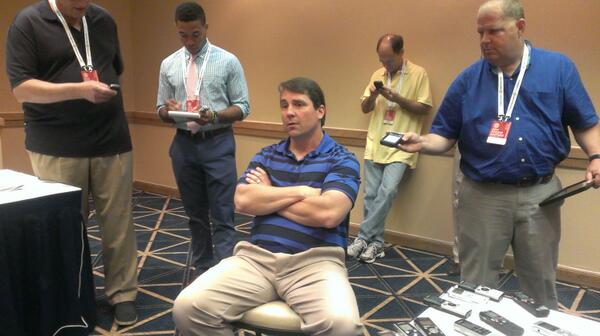 I wonder how many times he’ll be asked about Georgia Southern today.  Let fly in the comments.

Will Muschamp on not scheduling any more FCS teams: “The fan base wants to see better opponents"

Or at least not see Florida lose to worse opponents.

Stupid is as stupid does, boys.

Kansas State announces it has granted release of Leticia Romero under school's new policy. She can't transfer to a Big 12 school.

So Kansas State went through this entire rigmarole, was ridiculed nationally… all to wind up letting Romero go anyway.  But there’s a new policy, so, hey!

These are the people some of you think are capable of managing the business of college athletics.  The truth is, they couldn’t find their way out of a paper bag if you gave ’em a flashlight and pointed them in the right direction.

You can find tons of info on the Tigers’ summer depth chart here.  Basically, they are experienced and loaded all along the defensive line.

Clemson is deepest at the defensive line where all nine players listed on the two-deep are lettermen who have played at least 200 snaps in their careers. The group has played in a combined 266 games with 91 starts. They combined for 69 tackles for loss last year helping Clemson to a number-one ranking nationally in that category. The nine players have averaged 760 plays of experience entering the 2014 season. Six of the nine have already played at least 30 games.

Offensive line?  Not so much.

While the players returning to Clemson’s defensive line have 91 career starts combined, Clemson’s offensive linemen has 49.  The leader is David Beasley with 19 starts in 30 games played.

Beasley, by the way, is one of four players suspended for the opener in Athens.  All four appear in the current two-deep.

A 3:30 start in mid-September in Columbia should be comfortable, right?

With the scheduling hatchet being buried, at least for the time being, it sounds like Destin is going to be pretty boring this year.  Mike Slive is ready to run a victory lap.  Yawn.

Miles and Alleva will probably be good for a couple of whiny quotes about unfairness, but really, what is there other than that to follow?  I don’t know about you, but back patting over the SEC Network doesn’t exactly get the heart racing.  Maybe Spurrier can liven things up.

Boise State president Bob Kustra made noise last week with a scathing criticism of NCAA reforms. He said the NCAA has “ranged far afield” from the traditional amateur model because the five major conferences have hijacked the system to create “phony arguments about student welfare when the real goal of some of these so-called reformers is create a plutocracy that serves no useful purpose in American higher education.”

“I consider this period of time one of the historic moments that all of us are witnesses to — an evolutionary change where we put the student-athletes first and we build our philosophies on the student-athlete rather than the so-called level playing field,” Slive said. “I don’t know how this comes out, but I’m optimistic the evolution will continue.”

More significant is the acknowledgement that putting student-athletes first is a change of priorities.  Slive can try to make his motives sound as noble as he’d like, but it sounds hollow to insist that all the changes being advocated now aren’t in response to the outside threats that the lawsuits and the unionization effort represent.  Nevertheless, origins are increasingly less important going forward if the big conferences deliver on these promises.

The crucial matter is going to be accountability.  Mike Slive is writing an awfully big check with his mouth.  What’s being discussed now is just a start.  What happens when he’s asked to cash that check to buy some new things student-athletes want?

Obviously, it’s not getting the attention that the new playoffs are, but there’s another change being ushered in with the demise of the BCS that has the potential to be even more significant over the long haul.  The bowl system as it is today is being dismantled.

The 13-member selection committee will not only provide the final Top 25 rankings, but will determine which teams go to which New Year’s Six bowls that do not have conference tie-ins. In other words, you’ll see fewer bowl reps on campus wearing tacky blazers because they have no control over who comes to their bowl. That’s right: no control over what team plays in their bowl. Nada.

The selection committee will determine who plays where. Another big change: Bowls can no longer skip teams in the rankings to pick a lower-ranked team that travels better.  [Emphasis added.] The bowl teams will be selected based on the highest-available ranked team.

Right there is your admission that the power conferences have made the call that the future of college football is in broadcast revenue.  The bowls will have to live with that.  In fact, with the conferences negotiating lower ticket purchase guarantees, the TV money is going to be their key to survival.

But not as independent entities.  Because the other thing being established here is the principle that bowls outside the current semi-final arrangement are being reorganized around a pure seeding arrangement.  That makes things smoother when they’re preempted in the name of an expanded playoff.

The conferences have discovered how much leverage they wield.  Bowls as we know them are the dinosaurs of college football.