I wonder how many other programs can make a claim like that.

“We are trying to make room for guys who want to do things right.”

If you’re wondering why I posted that Mark Richt’s quote about Tray Matthews “becoming a very dependable guy” was one of the sillier things he’s uttered lately, well…

The short but tumultuous Georgia football career of Tray Matthews has come to an end.

The rising sophomore safety was dismissed from the team, head coach Mark Richt announced on Tuesday.

That quote is as blunt a statement as I’ve ever heard Richt make upon a player’s dismissal from the team, and you have to think, based on what he said a week ago, that this is over something more than Checkgate.

There’s something completely unsurprising about Matthews looking to transfer to either Auburn or Louisville, right?  Unsurprising, but amusing.

#Louisville plays #Auburn in the Georgia Dome to start 2015. Over-under of the number of former #UGA players in that game?

The QB and both defenders from Auburn's Hail Mary vs. Georgia last year have all been dismissed from Georgia.

I wonder when somebody decides to put together an “I was dismissed by Mark Richt” alumni party.  Looks like they’ll need a bigger room for that. 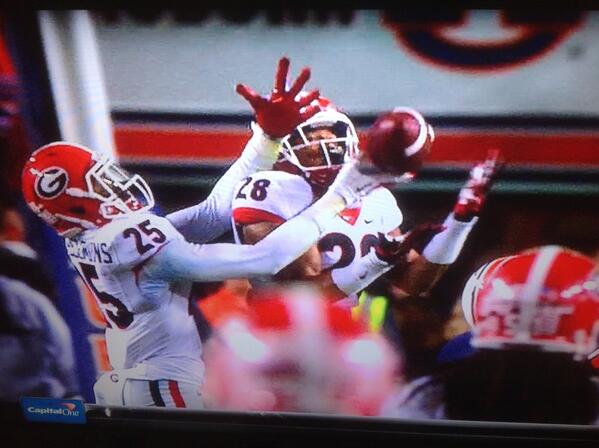 Thanks for the memories, guys. Best of luck.

A tale of two contracts

Hard to question Saban’s numbers, other than why it took seven months to hash out the contract extension.   But I continue to be amazed at every new SEC offensive coordinator who does better, financially speaking, than Mike Bobo.

Tater Tot on his ’93 national champions

Jon Solomon’s updated his piece about Auburn’s search for more national champs with a quote from Terry Bowden, who coached the 1993 team that’s supposedly under consideration.  He’s pretty good about it, to be honest, ranging from awkward (his dad won the ’93 title) to sensible to honest:

“You’ve been in the same world I’ve been in,” said Terry Bowden, Auburn’s coach in 1993. “In the last 20 years I think this argument hasn’t come up that much. My dad’s Florida State team is the only team we’ve kind of recognized from 1993.”

Bowden said he’s not sure why the Auburn debate is happening now — “Isn’t this about what Alabama does, then Auburn does (for counting national titles)?” he speculated — but added he would be proud if the 1993 team is recognized as a national champion.

“In light of the fact we’re talking about a mythical proclamation that’s not chosen by the NCAA or an NCAA-sanctioned playoff, everybody has the right to claim what they want to claim,” Bowden said. “All I can say is I wouldn’t want to get into that argument, but I’d be proud if they’re recognized. I do know that football team and those young men beat the defending national champion and at the end of the season was the only undefeated team left in the country. Somebody chose them. I don’t even know who that is, to be honest with you.”

It’s a helluva lot less cringeworthy than anything Tuberville’s had to say on the subject.

Dawg News from the Twitterverse

Coach Richt says Justin Scott-Wesley may be a little behind some other players returning from ACL injuries.

… and one roster matter.

I think the last one means they’re back under 85 players on scholarship.  So some walk-on is about to get rewarded.

UPDATE:  Bonus coverage from Seth Emerson at Pigskin Preview in Macon today – and guess who the first player Mason names in response to the usual question about whom he’s most excited.

This ESPN thought piece is by and large pretty worthless, especially Gene Wojciechowski’s part (a selection committee cam?  Ugh…), but you gotta love this bit from Mark Schlabach:

Running backs seem to be largely an afterthought in the NFL draft nowadays, but it’s still one of the most important positions in college football. Gurley, the Bulldogs’ sensational junior star, is the kind of running back who can carry a team on his shoulders. When Gurley is healthy, he might be the most valuable player in the sport. Unfortunately for the Bulldogs, he was banged up too much last season, missing long stretches with groin and ankle injuries. Gurley still managed to run for 989 yards with 10 touchdowns last season, after gaining 1,385 yards with 17 touchdowns as a freshman in 2012. Gurley is too good to be sitting on the sideline. If he stays healthy, he might become a Heisman Trophy finalist and a potential top-10 NFL draft pick.

I just hope everyone’s writing about Gurley’s production as positively during and after this season.

“I’ve got everything we’ve ever done at Tennessee and Ole Miss.”

“I’m a big believer in speed. You know long I’ve liked spreading a field. My theory basically is this: Defensive players have continued to get bigger and faster. We’re on the same size field as when we played. Really, the players are nothing like that.

“As you look at attacking a defense, it’s important to lengthen the field two ways. You’ve got to use the entire width of the field, and you have to try to take some form of vertical attack downfield. We’re not what people call ‘spread.’ We are a no-huddle, which I went to the second time at Tennessee. We are trying to find every way we can to run the ball vertically, to run it right at your mouth. In the process of doing that, I love being able to spread it deep with play-action, but we are also looking at how people defend the width of the field. So many young defensive coordinators do such a poor job of doing that. We’re going to take what they give us, still. We just do it a lot faster.”

Boy, do I remember that.

When Cutcliffe went to a three-receiver set before the end of the second quarter in that 2006 game, you could sense that Georgia’s defense was struggling to keep up.  37 second-half points later – the Dawgs had only given up 34 points the entire season before that game – we had our first real clue that Willie Martinez was no Brian VanGorder.

I bring this up because Florida’s sparkly new offensive coordinator is a disciple of Cutcliffe’s.  I’ll be interested to see how he matches wits with a young Jeremy Pruitt and a not-so-young John Jancek.

Steve Shaw knows holding when he sees it.

You know, I was gonna get all snarky about Steve Shaw’s criteria for calling holding…

“People see him locked up on (the offensive lineman’s) breast plates and that sort of thing. That’s not holding. OK, by definition that’s not holding. Now when it is, is when I lose my position and he starts to get away, now I’ve got to let him go. I can give him a shove but I can’t hold him back in.”

Then there’s what Shaw referred to as a “point-of-attack” blocking issue, such as a sweep to the right end. If a left tackle sticks his hand out there on a defender, it’s not a call unless it impacts the play.

“We don’t want that call,” Shaw said. “It may be a talk-to-the-player, but it has absolutely no impact to the play, and it has no personal foul, or it has no injury-related component to it, then we don’t want it as a foul. We want uality (sic) fouls. We want fouls that impact the play. Fouls that have an advantage (and a) disadvantage.”

… but I think instead I’m gonna take him at face value and watch a season of SEC ball to see if there’s any consistency to enforcing his standards.  I’m skeptical – “fouls that impact the play” seems like a fairly amorphous concept – but what the hell, maybe there’s more method to his madness than I give him credit for.

Or not.  One thing I do believe is worth keeping an eye this season on is whether the SEC crew with an extra man does a better job monitoring line play than the rest of Shaw’s crews.  Maybe what I perceive as inconsistency is more a product of not having enough eyes to go around than anything else.

I got your competitive balance right here.

I tweeted yesterday about what an excruciating experience it was to catch Andre Ware bloviating about college player compensation.  Ware’s basic position seems to be if he can’t figure out a way to make something work, he’s against it.  (He’d fit right in over at NCAA headquarters.)

One of the things he fretted about greatly was the idea that paying players would somehow rupture the delicate balance of competition that amateurism somehow magically sustains right now.  Andre, I’ve got some news for you – when four of the Big Five conferences are reporting annual revenues totaling more than a billion dollars, that balance train done left the station already.  So unless I missed you suggesting that the big boys share some of that loot with their less fortunate Division I brethren, I think I’d worry about something else.

Filed under BCS/Playoffs, College Football, Georgia Football, The Body Is A Temple, The NCAA