Now this surprises me.

DeLoach and Taylor "have and will face significant additional internal discipline," according to UGA.

I’m not saying whether it’s right or wrong.  But it is a departure from previous practice.

So at Georgia, eating a marijuana-laced brownie will cost you game time, but stealing from the school may not.  Interesting set of priorities.

“The expenses are not going down.”

Look, contrary to what some of you might think, it’s not as if I take great pleasure in ragging on Greg McGarity’s financial acumen.  But it’s hard to suffer in silence when my bullshit detector’s raging over comments like this one, about raising ticket prices:

“We have limited ways to generate revenue,” McGarity said at a UGA Athletic Association board of director’s meeting. “Unless we have increases in SEC money, which we don’t know, nobody knows what the TV network is going to generate but that’s [ticket sales] our really only other revenue source that we have.”

Reality, in the form of USA Today’s handy NCAA Finances chart, tells a different story.  If you click on the Georgia tab, you’ll see a steady increase in income over the last nine years:

That’s a thirty million dollar increase in annual revenue over that period, an almost 43% increase. (With a big ass recession smack dab in the middle, don’t forget.)  If that’s limited, I’d love to see McGarity’s definition of wide open.  And can we please stop with the “nobody knows what the TV network is going to generate” stuff?  Don’t tell me you’ve uprooted decades of conference tradition because you think there’s a good chance you’ll lose money on it.  Next we’ll be hearing that the school can’t expect any money from playoff expansion.

Hobie Jones, a Georgia alumni and lawyer living in Peachtree City, has been going to games since he was 7 years old and said he has not missed a home game in six years.

Jones said that an increase in ticket prices would not affect him.

“I would go either way,” Jones said.

… that’s where McGarity plans on getting the money from.  Thanks, Hobie!

That being said, I admit it could be worse.

UPDATE:  Oh, yeah. This reminded me of something else in the McGarity piece…

While the rationale for the move is largely economic, there is a football aspect to the increase, as Georgia looks to position itself as a controlling player in non-conference scheduling. Georgia pays teams who are not in their conference to come to Athens and play. McGarity estimates that UGA makes about 2.25 million dollars per home game. An increase in this number would allow UGA more room to be creative in scheduling, as it would have access to more money to lure teams to Sanford Stadium.

In other words, the cost of scheduling non-conference opponents who will accept one game offers is rising.  So we ticket buyers gotta pay for that.

I mentioned the other day how blunt Mark Richt was about Tray Matthews’ dismissal.  I can see why.

The incident in one of the Miller Learning Center’s many classrooms preceded Richt’s decision to let Matthews go by just a few hours. The disruption occurred toward the end of the nearly three-hour class around 1:45 p.m., and Matthews announced his dismissal on Twitter just minutes short of 5:30 p.m. Matthews blamed the disruption for his dismissal, but said he thought the arrest also played a part in the decision.

“That’s basically the reason why I got kicked off though,” Matthews said of the classroom incident. “That’s what [coach Mark Richt] told me basically. … Yeah, I think it’s kind of some of the arrest stuff, too, though. But I was basically, I was leaving anyways, I just hadn’t put that in the media.”  [Emphasis added.]

Soooooo… Matthews is struggling with his conditioning, partly because he’s not making enough effort to take care of himself, gets arrested for stealing but is allowed to stay on the team – an unusual departure from past practice – receives public praise from Richt a little over a week ago for acting like he’s starting to mature (Mark must not have read Tray’s Twitter feed), blows that and then has the chutzpah to claim he was leaving anyway?  Yeah, faced with that, I’d have been blunt, too.

Under the circumstances, Richt comes off as kind of restrained, now that I think about it.  Dang.

Bonus item, from Seth Emerson:  “Matthews said he has received a full release from UGA with no restrictions.”

When you say nothing at all…

Mocking Stacey Osburn’s unwillingness to comment is a popular theme here, but, damn, there are times when she comes off as the smartest person at the NCAA.  Take, for instance, this… um, remarkable official statement about the EA settlement in O’Bannon. 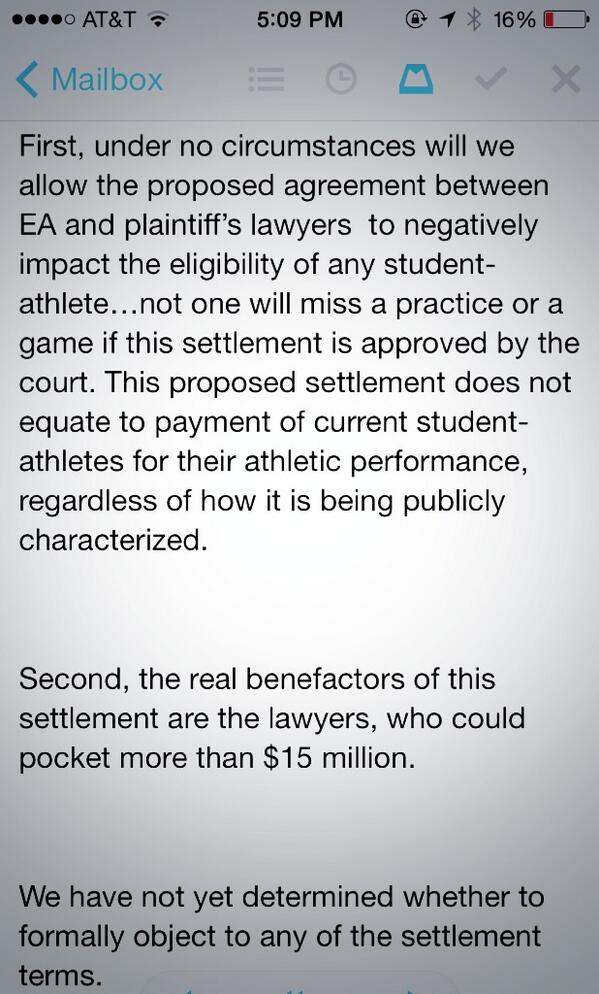 I mean, man, read that righteously indignant first paragraph!  If the NCAA doesn’t consider the money going to the players payment for their athletic performance, what the hell is it doing in court in the first place?

If the first paragraph comes off as clueless, the second one is incoherent.  Assuming it’s an attempt to bash lawyers for getting paid – is Donald Remy an amateur, by the way? – well, guys, I don’t think “benefactors” means what you think it means.

The whole thing comes off as a misdirected pile of passive-aggressive resentment that somebody besides the NCAA is exploiting student-athletes for financial gain.  (Although, unlike in the NCAA’s case, there are student-athletes actually receiving money as a direct result.)

Next time, folks, just write the last sentence and call it a day.  Or let Stacey do your talking for you.

UPDATE:  About that second paragraph – somebody found the dictionary at NCAA headquarters.

“So the track record is not sterling.”

Andrea Adelson, on the pipeline from the SEC to Louisville:

Atlantic Division front-runners Florida State and Clemson are the only two ACC schools consistently recruiting at an SEC level on a consistent basis. To compete with them, Louisville must do the same. Accepting these transfers is one way to start closing the talent gap that currently exists between the programs. Williams, Wiggins, Harvey-Clemons and Matthews were all four-star recruits out of high school. The three Georgia players were ranked in the ESPN 300 and were dubbed the Bulldogs’ defensive backfield of the future.

As successful as Louisville was in its final years in the Big East/American, playing in a tougher conference means you need better players. Looking for transfers — even transfers with baggage — is one way to do that.

There are some risks involved. Harvey-Clemons and Matthews were both dismissed from Georgia. Though no specific details were given about Matthews’ departure, Harvey-Clemons served multiple suspensions for team rules violations, including the 2013 Capital One Bowl.

Petrino was criticized during his first go-around with Louisville for bringing in players with discipline problems. Athletic director Tom Jurich told one reporter in 2008 that the Cardinals dismissed 21 players after Petrino left for the Atlanta Falcons because of disciplinary issues.

And why not, if you expect you won’t be there in three or four years?  Of course, he’ll swear on a stack of bibles never again…

But Petrino and Jurich have both vowed things would be different in the program this time. Given where Louisville stands as it heads into the ACC, Petrino has to be willing to take a few risks. At the same time, he also has to show he means business with the players who have been in trouble in the past. Second chances are one thing, but there needs to be a level of discipline in the program that was not there the first time Petrino was in charge.

… but I’m guessing the new kids feel pretty good about where they’re going.

“No matter what my star was, I knew I had to come in and prove myself to everybody.”

I’m never been someone who’s entirely comfortable with the ease that some are willing to characterize college athletes as a class as spoiled, entitled kids who expect more than they’ve earned.  For one thing, I’ve raised three of my own, none of whom were scholarship athletes, and they certainly had their share of spoiled, entitled moments.  For another, I tend to resist pat explanations as lazy thinking.

But even with that in mind, I’m having a hard time ignoring the picture that Garrison Smith paints about last year’s defense.

… As Smith saw it, talent wasn’t the secondary’s problem. It was a sense of entitlement from young players, as well as leadership.

“When I was first here, we had guys like Brandon Boykin, and Sanders Commings. (Bacarri) Rambo and guys like that were leaders. They were able to speak up and be vocal,” Smith said. “Whereas once they left we didn’t have any more guys that were vocal like that. Everybody was so laid back. And that was one of the big things that happened last year.”

Smith declined to talk about any player specifically. But he agreed that “a couple of them” came to campus believing too much in their recruiting hype, and were able to quickly earn playing time because of the lack of returning starters.

“When you already get slotted into a position and you never played a down, and you’re already starting when you come in, you get a big head, and that’s what happened to a lot of guys,” Smith said.

A perfect storm, in other words, rather than a case of poor evaluation on the recruiting trail.

Naturally, it raises the question of whether Georgia is erring in recruiting evaluation. But Rusty Mansell, the recruiting analyst for Dawgs247.com, discounted that as the issue.

“Georgia didn’t take any chances in signing these kids. There were no red flags with them. These kids were recruited by everybody,” Mansell said. “I knew all those kids, covered every one of them. I knew them at an early age, and nothing really told me this guy is going to be an issue.”

Roster mismanagement is something that has come home to roost in all kinds of ways with this program.  That doesn’t mean Richt has to Sabanesquely oversign.  But this sure as hell looks like another sign that being a dozen short of the scholarship limit of 85 isn’t the best way to go about doing business.