So when is the right time for a coordinator to make a move? And what’s the correct path?

“I really don’t know the answer, to be honest with you,” Georgia offensive coordinator Mike Bobo said. “I think you just know when you know it’s time to do it. I don’t think you try to force it — to where you want to be a head coach so bad that you’ll jump at anything.”

Bobo, who has coached quarterbacks at his alma mater for the past 14 seasons and directed UGA’s offense since 2007, has had opportunities to leave. His name was connected to head-coaching positions at Southern Miss and Georgia Southern, and Virginia Tech tried to hire him as its offensive coordinator in 2013.

Bobo said he and his family are so emotionally attached to UGA that it would take the perfect situation to pry him out of Athens.

“[UGA coach] Mark Richt says if you want another job or a better job, apply enthusiasm to the one you have,” Bobo said. “Ever since I heard him say that, it’s the approach I’ve taken.”

Those are not the words of a Jimmy Sexton client, that’s for sure.

Just writes itself…RT @mrkthompsn: @RadiNabulsi If UGA is ever troubled with red zone problems, I think I found why http://t.co/POwMrk5wgS 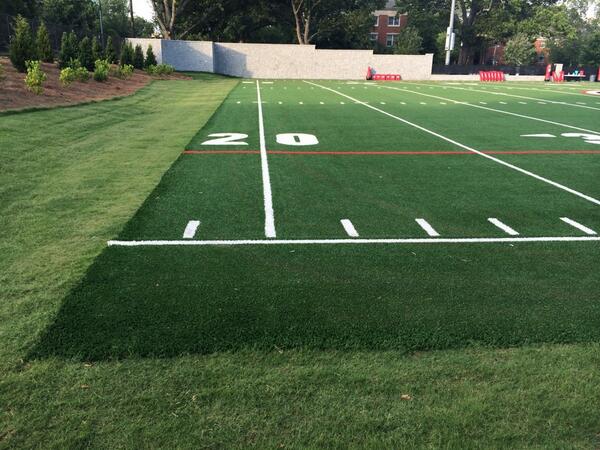 If you want to take that as some sort of metaphor, I guess there’s nothing stopping you.

Bang for the postseason buck

Just like everything else around college football, the cost of big time sponsorship is on the rise.

It’s probably not a coincidence this is now happening:

Capital One is reportedly ending its sponsorship of Orlando’s top bowl as part of a bigger bowl sponsorship shakeup first reported by the Sports Business Journal Monday.

Tostitos and Discover have told ESPN — the media rights holder for both games — that they plan on ending their sponsorships with the Fiesta and Orange bowls. Both bowl games are part of the new College Football Playoff.

Tostitos is one of the longest running title sponsors in college football. Its decision would end an 18-year relationship with the bowl game.

Cap One is reportedly looking at stepping into Discover’s former shoes at the Orange Bowl.  There’s always somebody that wants to get in front of live eyes and is willing to pay for the privilege.  At least for now.

A wizard, a true star

Jeebus, it looks like ESPN is all in with Jacob Coker.

Every year, it seems, a quarterback comes out of the shadows in the SEC to have a huge year. Cam Newton did it in 2010, Johnny Manziel in 2012 and Marshall last season. Coker could be that guy in 2014 after transferring in from Florida State. His former coach, Jimbo Fisher, says Coker will be the most talented quarterback Nick Saban has had at Alabama.

And of course, this goes without saying.  (Haney’s at least got enough of a sense of shame to ask why, “For a dude who has never taken a meaningful snap, we sure talk a lot about Jacob Coker?”, although he chalks the question up to his readers, not the guys at ESPN.  Still.)

I don’t know if I’d book Coker a trip to New York quite yet, but he’s shaping up as my early leader to be the subject of this year’s Verne crush.

I don’t know how much between the lines reading you want to take from this, vis–à–vis Daryl Jones’ departure, but it looks like his replacement’s primary responsibility will be implementing Bryan McClendon’s game plan for recruiting.

The job description (VIEW IT HERE) reads as, “The Director of Player Personnel is responsible for the organization of the recruiting department and its day to day functions. They will work to support the vision of the Football Recruiting Coordinator (who is now Bryan McClendon).”

Reads like a drop down in the chain of command to me.  This, as well:  “If you’re looking for a comparison, Alabama under Nick Saban has referred to the daily head of its recruiting support staff — see here — as the Director of Player Personnel.”

It also reads like a big vote of confidence in McClendon.  Deservedly so.  I can remember when a lot of people were knocking Richt for that hire, too.

Envy and jealousy, an epitaph?

Ivan Maisel reads the John Bacon piece I linked to the other day on how Michigan’s marketing is backfiring and sums things up beautifully: