Damn, I hate when that happens.

Truly, there’s nothing sadder than Stingtalk smugness cut down in its prime.

Name that caption, the dawn of a new era edition

How could I resist this? 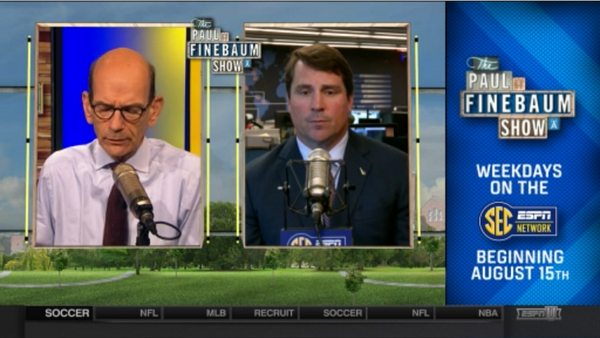 The look on Boom’s face…
Anyway, share your thoughts in the comments.

One reason I question how seriously the CFP selection committee takes all the trappings surrounding its mission is because I’m not sure the committee itself will take that stuff all too seriously.

Take, for example, the role statistical analysis will play in seeding the semi-final pool.

“The real difference is we are going to pick four teams and it is going to be done by human beings and not by computers,” said Tranghese.

The hope is to avoid some of the controversies that plagued the BCS during its reign over college football, some of which were caused by those pesky computers. For example, the split national titles for LSU and USC in 2003 and an undefeated Auburn team left out of the title picture a year later. And let’s not forget the 2007 LSU squad that won a championship despite suffering two losses during the season.

Blaming the final selections in those controversial years on computers is so much happy horse shit, of course.  (And it’s not like anyone’s quick to give the computers the credit for the years the BCS nailed the final two teams.) Computers are there to calculate the data that humans feed them.  It’s up to the latter to prevent garbage in, garbage out situations.

But anyway, it’s not like they’re locking the computers out of the selection room now.  Quite the contrary, there’s going to be a dizzying amount of data made available to committee members.  The issue is how much understanding of statistical analysis do they have to make useful decisions based on the information they will access.  Or, from the original Geek,

“The custom platform we built for selection committee was to their specifications and has approximately 100 million pieces of data, including those at the season, game, possession and play-by-play level,” SportSource co-founder Scott Prather said. “We put that into different tools that make it easy for the selection committee to compare and contrast teams.”

“We have statistics at every level of granularity,” Prather continued. “Using custom filters each committee member can determine the information important to them.”

Tranghese’s response manages to be both predictable and hilarious at the same time.

“I don’t think this is rocket science,” said Tranghese.

Yeah, there’s no reason to think it can’t work.

A little later in the day, but just as tasty.

Today’s life lesson:  If you’re in a bar in Nashville called “Losers Most Wanted” and somebody yells “Roll Tide!” at you, you might want to duck.

If Dabo didn’t exist, the OBC would have to invent him.

Steve Spurrier on Dabo Swinney’s “He’s from Pluto, I’m from Mars” quote: “Dabo still thinks there are 9 planets out there"

Spurrier doesn’t miss too many of those.

The funniest thing that came out of ACC media days yesterday had to be the national media’s fetish with Jimbo Fisher putting peanuts in his Coke.

The Big 12 Commissioner, we are told, “came to the defense of the collegiate model” at Big 12 media days Monday.  It was a touching performance.

“It is hard to justify paying student-athletes in football and men’s basketball and not recognizing the significant effort that swimmers and wrestlers and lacrosse players and track athletes all put in,” he said. “Football and basketball players don’t work any harder than anybody else; they just happen to have the blessing of an adoring public who is willing to pay for the tickets and willing to buy the products on television that come with the high visibility.

Touching, but totally divorced from economic reality. Those lucky duck football and basketball players simply fortunate enough to be blessed with the scarce skills that the market place demands, why should they be rewarded for that? If everyone in this world were paid according to effort, I doubt Bob himself would be pulling in the big bucks he’s getting paid right now… speaking of which, exactly how far do those legal and moral obligations stretch?

About as far as you’d think.

“In the end,” he said, “it’s a somewhat zero-sum game. There’s only so much money out there. I don’t think that coaches and athletic directors are likely going to take pay cuts.[Emphasis added.] I think that train’s left the station. … I think over a period of time what we’ll find is that instead of keeping a tennis program, they’re going to do the things that it takes to keep the football and men’s and women’s basketball programs strong.”

Obligations are for the little guy – straight out of the 21st-century captains of industry playbook.  There’s your collegiate model.  And remember, Bowlsby doesn’t think this is even debatable.  No wonder he expects to be in court the rest of his career.

You know what they say…

When one door closes at Georgia, thirteen other doors open across the SEC.