You had to think Spurrier was tuned in to ESPN last night.  He was.

Steve Spurrier: "You wonder how anybody is going to tackle (Todd Gurley) right now, but we'll worry about that next week."

Methinks this is a wee bit premature. 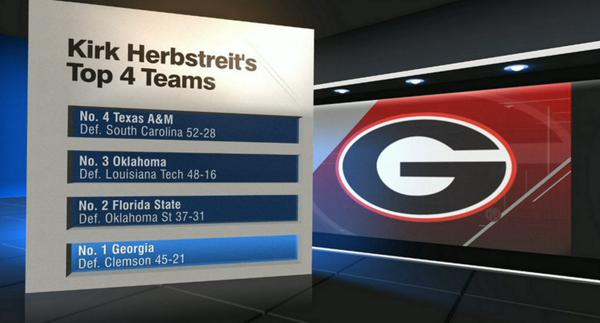 But it’s fun to look at.

UPDATE:  This needs to stop.

Observations from the 35, Clemson-Georgia edition

Like Gaul, last night’s opener was divided into three parts:  a first half that was marked by huge momentum swings, a third quarter of trench warfare and a fourth quarter that may very well have been the most dominant one of Mark Richt’s head coaching career.  In the end, it added up to a decisive 24-point win that leaves the team and the fan base in the same emotional place it was in after last September’s win over LSU.  We’ll have to wait and see if the rest of the story turns out happier than last year’s, but in the meantime, there is plenty to savor from what I saw last night.

So how much should we take away from last night?  Well, start with players buying into what the coaches are selling.  I’ve got to think every player on Georgia’s defense now believes Jeremy Pruitt walks on water. Ditto on the special teams front.  Second, conditioning.  For once, it wasn’t Georgia’s players wilting on a hot, humid night against an opponent whose offensive coordinator believes in running defenses into the ground with as many plays as possible.  And third, this group of running backs has the potential to rival the deep groups that Georgia turned out in the mid- to late-80s.

As small sample sizes go, that’s as good a beginning as I could hope for.

Electricity, a play in four acts

To be the best, you’ve got to play the best.

Richt slowly seems to be shaking off his playing not to lose mentality as it pertains to Georgia’s return teams.  (I say slowly, because he still trotted out punt safe teams way too often last night.  But Rome admittedly wasn’t built in a day.)

Todd Gurley makes it easier to grow a pair.

Gurley first tied the game with a 100-yard kickoff return in the second quarter. Richt now regrets not keeping Gurley on kick return, where he was early in his freshman year before they decided not to risk him on special teams.

“We cheesed up. We decided, ‘Well we can’t put him back there because something may happen or something like that,’ ” Richt said. “This year I was like, ‘We’re putting our best players on special teams.’ ”

Georgia amassed 171 return yards in the opener.  For context, Georgia’s return yardage for the entirety of the 2013 season was 538.

Consider that grounds for optimism.

Mark Richt finally gets something he wanted.

This brings to mind what was rumored to be a point of strong disagreement between Georgia’s head coach and Todd Grantham last year.

“It’s nice to get a rest physically, but it’s nice to get a rest mentally, as well. We knew going in we were going to sub a lot,” Richt said. “I can’t tell you how many times over the years we’re in the meetings saying, ‘We’re going to sub; we’re going to sub,’ and then you get into the game and we just say, ‘Oh we can’t put the second team in. The game’s too close.’ But we did it from the very beginning and I’m glad Pruitt and the rest of the defensive staff stayed true.”

There were so many players going in and out of the game yesterday that I honestly lost track on occasion.  But that paid big dividends in the fourth quarter.

It’s always better hearing the other guy saying that.

Gawd, this sounds so much better coming from a Clemson player’s lips:

“I feel like 45 points in no way dictates our defense at all,” junior safety Robert Smith said. “Because I’ve seen how far we’ve come throughout the summer. We know we’re better than that.”

There, I said it.

There’s nothing like heading up for a home opener.  I’m getting ready to go.

For those of you planning on attending Hoppypalooza, remember the festivities start at 1:30.  We’re in the Railroad Lot (#29).  Look for a crudely lettered “GTP” sign and you’ll find us.

BYOB.  And your bad selves.

Here’s an interesting factoid to digest.

Clemson’s defense may be better, but it’ll need to be.