… was convincing the world that Alabama didn’t need a great quarterback – or even an experienced one – to exist as a national powerhouse.

Autonomy, if you can keep it.

Welp, they’ve up and done it.

The NCAA Division I board of directors on Thursday voted to allow the 65 schools in the top five conferences to write many of their own rules. The autonomy measures — which the power conferences had all but demanded — will permit those leagues to decide on things such as cost-of-attendance stipends and insurance benefits for players, staff sizes, recruiting rules and mandatory hours spent on individual sports.

The Power Five (the ACC, Big 12, Big Ten, SEC and Pac-12) could begin submitting their own legislation by Oct. 1 and have it enacted at the January 2015 NCAA convention in Washington, D.C.

In a remarkably pessimistic piece, John Infante says it’s the beginning of the end of Division I.

Sooner rather than later, Division I will be gone. NCAA governance reforms have a short-shelf life and it would be shocking if this one sees the next decade before we hear agitation for the next logical step (a fourth NCAA division) or the next realistic one (separation of the power conferences from the NCAA). That day will be lamented as this end of Division I, but that will be like putting down an undead zombie. Today is the day that Division I as an idea, its soul, is well and truly dead.

I get his point.  When you think about it, what’s the only thing holding D-I together right now?  That’s right, March Madness revenue.  That’s a pretty weak glue in an era when chasing down every last dollar counts.  The big boys already don’t want to share football revenues with the little kids.  What do you think will happen when they come to the same realization about basketball?

That is, if they’re allowed to.  Infante makes another good point when he writes,

But that leaves Division I as simply a grouping of teams that play against each other. For some, that is enough. But college athletics is not simply a sports league, and it’s not a private business. It is a massive taxpayer-backed (when not explicitly taxpayer-funded) government program. The members of the NCAA are all either public universities, tax-exempt private universities, or for-profit universities heavily dependent on federal student-aid. A portion of every dollar that is guaranteed in a coaching contract or issued as debt by an athletic department might potentially be paid off by money that came from taxpayers. For that investment, we should demand more of our public institutions than simply playing games against each other.

U.S. Sen. Orrin Hatch (R-Utah) issued a statement Thursday saying the NCAA’s new model may warrant Congressional review from the Senate Judiciary Committee, of which he is a member.

“The NCAA should be responsible for promoting fair competition among its participating institutions and their student athletes,” Hatch said. “I am concerned that today’s actions could create an uneven playing field that may prevent some institutions from being able to compete fairly with other schools that have superior resources to pay for student athletes. I also worry about how this decision will affect a school’s Title IX requirements and whether this consolidation of power will restrict competition and warrant antitrust scrutiny.”

Hatch and other Congresscritters like Joe Barton were easy to mock during the Great BCS/Playoff debate because it was a foolish, mockable quest in which they were engaged.  This go ’round is likely to be a very different animal, mainly because I’m convinced that sooner or later the NCAA is going to make a hard go at Congress to get an antitrust exemption.  Not sharing involves a lot of heavy lifting.  These guys have no idea what asking for help from the likes of Orrin Hatch involves.

SI.com has a sense of humor.

Tim Tebow and Paul Finebaum on one show? Tell me fans won’t watch that.

I can’t help it – every time I read that, I start laughing.

Filed under ESPN Is The Devil, Media Punditry/Foibles

State of the art, baby.

TE Jay Rome also back in green, and was shoveling sand with a pic axe under the watching eye of head strength coach Joe Tereshinski 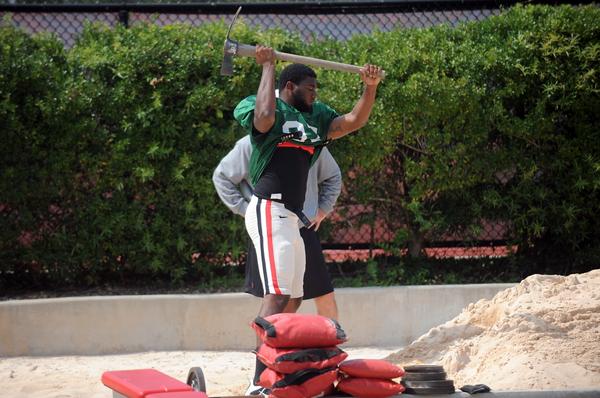 I can’t wait to hear the explanation.

“The playoff’s not going to change scheduling much.”

Once you get over the amusement of Tommy Tuberville complaining that power conference schools are still scheduling cupcake games – yes, that Tommy Tuberville – you will be shocked, shocked to learn that the advent of the new CFB playoff hasn’t changed things too much on the scheduling front.

Since presidents officially approved the four-team playoff on June 27, 2012, about 73 percent of the games scheduled by the Power 5 conferences (plus Notre Dame and BYU) are outside the power conference structure — games against schools from the American, Mountain West, C-USA, MAC, Sun Belt conferences or FCS.

Combing through scheduling announcements from the last 25 months showed that 45 of the 300-plus games involving those power schools were to play FCS opponents, with another 78 for C-USA (40) or Sun Belt (38) teams.

That total of 123 games comprises about 40 percent of the games found, while dwarfing the 83 or so games scheduled between two power-conference schools.

Why should anyone be surprised by that?  Until a school or a conference gets smacked in the face by a real world consequence to scheduling weak sister games, why would there be any motivation to change what’s worked so well for so long?

Bill Snyder wakes up, discovers filthy lucre is a problem.

Note that he doesn’t propose a solution, either.

He needs to embrace the… whatever it is that his conference commissioner is embracing here:

“The rules and the changes that might be made are an attempt to be permissive, but they’re also intended to take into account the fact that those 65 [power-conference] schools are largely the face of what most people know as college athletics,” Bowlsby said. “… I think we got to a place where we just believe that there was a need for us to perhaps be a little less egalitarian, a little less magnanimous of the 350 schools and spend a little time worrying about the most severe issues that are troubling our schools among the 65.”

Of course, Bob Bowlsby doesn’t think everything is lost yet, because the players don’t get paid.  And he’s on a mission to keep it that way.

“If you’re going to compensate for expenses for football and basketball players, it isn’t even arguable that we wouldn’t do it for every other student-athlete on our campus.”

Of course, no piece about keeping the players from their market worth would be complete without a Steve Patterson observation.

Patterson, however, spoke out against the idea, contending that the name on the front of the jersey enhances the name on the back of the jersey, and that student-athletes are receiving tangible benefits right now. “I don’t think you should create a marketplace for the one half of one percent that might have a certain market value and then distort all the competitive issues around that and all the revenue issues around that,” he told a group of reporters after Wednesday’s event. “I think we have done a poor job of talking about that.”

You’ve done a poor job of communicating about a lot of things, Steve.