The SEC Network is a cruel mistress. 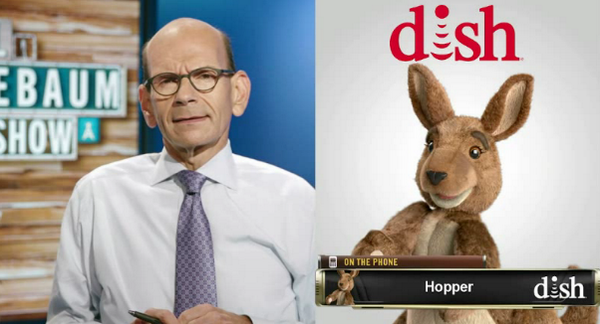 … but for the first time regarding Finebaum, words fail me.

Filed under ESPN Is The Devil, PAWWWLLL!!!

So much for absence makes the heart grow fonder.

Mark Richt doesn’t seem to be reluctant about throwing daggers in Todd Grantham’s direction these days.

Richt says each defensive coach having a background at the high school level has helped w/ fundamentals. "Some coaches forget about that."

Of course, I could be totally off base about who those “some coaches” are.

But I doubt it.

Bovada has post some over/under player stats.  Here’s what it’s got for Todd Gurley:

Looks like some baby-splitting going on there, based on his first two years’ production.  If he stays healthy, those numbers are way below his freshman results.

Would you put money on it, either way?

Mason and trust in the not-so year of the quarterback

Pat Forde returns to the “SEC, it’s not your quarterbacks’ year” meme in this post.  First, one interesting factual nugget:

Sounds like that means there might be an entirely different, yet equally valid reason this year’s conference may be more run-oriented.  But Forde may have a good point of his own when he notes,

In an effort to win turnover margin, expect a very conservative September in a lot of SEC locales. Until coaches know they can trust their young quarterbacks, they’re not going to place the weight of the world on their shoulder pads.

In light of that, how much comfort should be taken with Mason’s avoidance of throwing picks in practice in the spring and fall?  Certainly it’s no guarantee of perfection come September, but if it’s an indication of emphasis and Mason’s appreciation of its importance, he may be farther along the trust curve than some of his peers, which should be good news for Georgia’s offense.

UPDATE:  A little more about Mason, from an unnamed coach who faced Georgia last season.

Hutson Mason’s got some game reps under his belt, and that’s an advantage. It’s not like he’s stepping into a role where he’s playing for the first time. The depth in their backfield is phenomenal. That helps for Mason’s transition, because you’re not going to have to lean on his arm to win ball games. Having a strong run game can only open up throwing lanes for the quarterback — and the strength of their offense will be their running…

Getting pounded: it must be mid-preseason camp.

It appears Merritt Hall's football career is over. Hutson Mason reported that Hall has been medically disqualified due to concussions.

I sure hate to hear that.  Sincerely hope there are no long-term consequences for Hall.

Another day, another buffet line.

Now comes his list of defensive coordinators, and Jeremy Pruitt pops up at number three.  With a bullet.

His stock surged last year after coming over from Alabama and helping FSU get over the top to win the BCS title. The Noles led the nation in scoring D (12.1 ppg) in 2013. If he can remedy what has been an underachieving Bulldog defense and help UGA win an SEC title, his profile will REALLY take off.

By the way, five of the DCs on his list coach in the SEC.  And Louisville’s guy didn’t make the list.

ESPN lets us know that 2013 really was a special year for Georgia.

My first thought was to blame that on the injury situation, but those stats were compiled despite the injuries.  That leaves the usual suspects – defense and special teams.

How good could last year’s team have been if those two areas had merely been competent?

Okay, now that it’s fine for schools to pay student-athletes’ cost of attendance in full, it should be smooth sailing, right?

Not so fast, bacon breath.  John Infante points out the obvious:  cost of attendance not only varies from conference to conference, it varies from school to school.  Here are his calculations for the SEC:

*Vanderbilt only gives “varies” for travel allowance so it was not included.

Note the pretty massive spread between Georgia and Tennessee there.

… There is no way this will fly. Not only do some schools offer more than others, but there is no rhyme or reason to why one is greater than the other. Why are travel, clothing, entertainment, and other personal expenses more than twice as expensive in Knoxville, TN as in Los Angeles, CA? Why an over $600 difference between the two Los Angeles schools.

But at the same time, the options for doing so are very limited. The power conferences have one way to normalize cost of attendance across all 65 schools: let every school go up to the highest cost of attendance figure, which in this case is Tennessee’s $5,666.

But that has its own set of problems. First, many schools would then be permitted to exceed cost of attendance, some by thousands of dollars. Not only is that philosophically troubling for the NCAA, it also complicates matters with financial aid offices. If a portion of an athletic scholarship exceeds cost of attendance and is not paid through the financial aid office, what is but payment for services rendered?

Second, this would be massively more expensive than some schools were likely planning for. Tennessee’s number is almost twice as much as the Pac–12’s average. A school like Iowa State, already worried about paying for COA scholarships would see the cost go up by more than $3,000 per full scholarship equivalency. At that point, the divide between the haves, the have-mores, and the real elite would begin to show quickly and clearly.

And finally, it does not solve the perceived imbalance of giving athletes the same living allowance across the country when the cost of living varies wildly among the cities where these 65 schools are located.

My bet is after a tremendous amount of infighting, they fall back on the default of letting each school set its own number.  It’ll be just like letting everyone come up with their own drug policies. Hey, what could go wrong with that?

The possibilities are endless.