Todd Gurley is not a crook.

I realize I run the risk of getting virtually bitch-slapped for what I’m about to post.  And I’m sorry about that.  I have no doubt of the sincerity of the author of this post.  As sincere as she may be, though, she’s way off base with her sentiment.

Todd Gurley hasn’t broken the law.  He hasn’t broken a team rule.  He’s still in good standing with his coaches and his teammates.  He still practices with them.

What he stands accused of is exactly the same thing Mark Richt does every time he gets behind the wheel of that big Ford truck and faces the camera:  getting paid for being himself.  And if Todd Gurley left Georgia tomorrow, he’d be free to pick up where he left off.

That isn’t to excuse Gurley.  The NCAA rule exists and he’s alleged to have violated it.  There are consequences.

But there’s nothing noble about his suspension.  Georgia isn’t taking some brave stand here.  And, with all due respect to Mary Grace Alston Lyon, it’s wrong to romanticize the situation.  All you’re doing is encouraging the greedy bastards who are well on their way to ruining our beloved sport to stay greedy.

College football may have a soul.  But the people forcing Todd Gurley to sit out and be unable to contribute to his team have money market accounts and reserve funds.  Don’t make the mistake of confusing the two.  Gurley and college football deserve better than that.

Name that caption, are you out of your damned mind? edition

This is how Steve Spurrier looks upon being asked about stories linking him to the potential job opening at Florida. 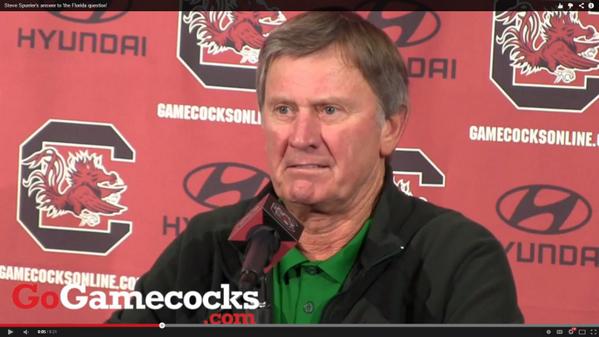 I wonder what Jeremy Foley’s face would look like upon similar questioning.  Anyway, your caption suggestions are welcomed.

Ladies and gentlemen, our long national postseason nightmare isn’t over.

Yeah, this is fun to think about…

The Stephen King scenario is this: undefeated Mississippi (1) and undefeated Mississippi State (2) play an epic Egg Bowl on Nov. 29, with the winner advancing to meet 11-1 Georgia (3) in the SEC championship game Dec. 6. Georgia wins that in another classic, and the SEC is sitting there with three one-loss teams that all would at least theoretically be ranked in every top four heading into Selection Sunday.

… but if you’ve got playoff fever, there’s a way to cure that bad boy.  More brackets, of course.

The best things in life are Free Gurley, but you can keep ’em for the birds and bees.

Here’s something else about which Mark Emmert would like to remain totally clueless.

Calling this stuff farcical would be an insult to farces everywhere.

“Before we go out there, Coach Pruitt always stresses for us to get a turnover.”

So far, one of the big stories of Georgia’s 2014 season is the huge reversal of fortunes on the turnover margin front.

… Georgia leads the nation in turnover margin, flipping the script from last season when it ranked a lowly 102nd in FBS in that category.

The Bulldogs are now plus-13 on the season.

“I’m very pleased with that,” Georgia coach Mark Richt said. “We work hard on it.”

Georgia has 17 turnovers gained and only four lost.

It’s the best they’ve done in the Richt era, but they still have a way to go on the all-time front.

Georgia had a plus-23 turnover margin on its way to the 1980 national championship, with its plus-2.09 ratio ranking among the top five single seasons in NCAA history.

That’s pretty incredible.  I’d almost be willing to bet that stat makes Vince Dooley happier than anything else that happened that season.

Mark “There’s not anyone talking about change in that rule right now” Emmert, this one goes out to you, my man.

By all means, help yourselves.

Another exciting week of football is reflected in a few changes in the Mumme Poll rankings.

Really, not much to question there. I don’t know about you, but it took me less than ten minutes to put my ballot together this week. Even Archie Manning could handle that, I think.

It always ticks me off when I forget to mention something I took note of in a game when it’s time to do an Observations post.  Gentry Estes reminded me of just such an event from last Saturday.

Big moment in the game early when Georgia missed on the onside kick, giving Arkansas great field position. But after running it so well on the first drive, the Razorbacks for some reason decided to pass on first down. The RB couldn’t protect against Ray Drew, who flushed the QB into Swann, who blitzed from the backside as no WR lined up on his side of the field. Swann’s hit forced a fumble that Arkansas recovered for a loss of 10 yards. The Bulldogs then went nickel on the next play, and Leonard Floyd whipped the right tackle badly and got another sack, chasing down and slamming the QB to the turf. This was a huge stretch in this game. Not only did it not allow the Razorbacks to take advantage of UGA’s failed gamble in the short term, but it also allowed the defense to get confidence and set a tone of pass protection problems that would plague Arkansas up front for much of the game.

He’s absolutely right about that, both because of the message Richt sent to his team and to Arkansas that Georgia was going to be coached aggressively and because of the way the defense responded when the kick wasn’t executed properly.  Sure, Arkansas’ questionable play calling there didn’t hurt, but it’s not like the Hogs did much on the ground after that first drive, anyway.

I liked it all.  Now if they can get Morgan fixed on those onside kicks…