The secret of Georgia’s success

Grantham’s tenure at Georgia ended with a bit of a flop — the young Bulldogs surrendered 29 points and 375.5 yards per game last season — as fans and media questioned his job security throughout the 2013 season.

“We obviously had a really young team last year and we kind of faced some veteran offenses, some veteran quarterbacks, and because of that, we had to take some shots with those guys, but I think they got better for it,” Grantham recalled. “They were able to mature and I think that’s one of the reasons they’re able to have some success right now.”

An example of how they got better for it?  Well…

Alone in the SEC, Georgia’s defense didn’t give up a pass play that gained over 40 yards this season – Louisville yielded eleven of those, by the way – so, I guess if you want to say that being epically embarrassed to work hard enough to never show your ass like that again is a sign of maturity, then Grantham taking credit for Georgia’s defensive improvement in 2014 makes some sense.

Or you could just say the man has some chutzpah.

Help a beat writer out.

Honestly, this is too good a request not to repost here.

Teleconference call this afternoon with Louisville defensive coordinator Todd Grantham. What would you ask him?

Your suggestions, as always, are welcomed in the comments.

UPDATE:  A few comments from the call.

Grantham said he's proud of his four years at Georgia: "I feel like we changed the culture and developed the mental toughness of our team."

Grantham also praised Mike Bobo: "He’s passionate in his coaching. He’s got a great mind for what he wants done."

Grantham told reporters of his familiarity with the Bulldogs, “I don’t think that will play as big a factor as you guys will make it out to be” in the upcoming game.

“It still gets down to getting off blocks,” Grantham said, “tackling people, winning one-on-one battles. … They’re one of the best offenses in the country. We know we’ve got to play well.”

Grantham on Jeremy Pruitt: "He's done a really good job. He's a very good coach in what he's trying to do." http://t.co/Qkst71DehW

Another “watershed moment” in the annals of coaching salaries

It was five season ago that Tennessee made Monte Kiffin the first assistant coach to make over $1 million per year. Five assistants made that much in 2014, with a sixth just $25,000 shy of the mark. That 2009 Tennessee assistant staff cost a then-record $3.325 million. Last season, 14 staffs made at least that much. In 2009, only six assistant coaches made at least half a million. This past season, 73 assistants made half a million or more. And that’s just what is public knowledge. Schools whose assistants’ salaries we don’t know like Notre Dame and Penn State almost certainly push two of those counts upwards.

Muschamp’s new deal feels like another watershed moment like Monte Kiffin breaking the million mark back in 2009. Consider Troy, which just hired former Kentucky OC Neal Brown as its head coach. Brown will make $660,000 per year and has a $1.2 million budget for assistant coaches. In total, that staff will cost $1.86 million. Muschamp will make nearly that by himself to be a coordinator at Auburn.

To repeat: an SEC assistant will make just $26,000 per year less than an entire Sun Belt coaching staff will make.

Those of you who believe that Butts-Mehre has everything on the compensation front under control… well, maybe you’re right.  But I think you and McGarity are ignoring the obvious – the rising flood of money pouring into the P5 conferences from TV and the bar to paying any significant labor expenses due to NCAA rules means there’s more and more money looking to be spent somewhere.  For schools like Auburn, LSU and Alabama, that’s gonna be on coaches and support staffs.  Most troubling of all, the trend only seems to be accelerating.

It’s nice that Richt is willing to take a discount to coach in Athens.  Maybe the rest of the staff is, too.  The problem down the road is that if McGarity and his bosses expect anyone who coaches football at Georgia to accept a similar shave in compensation because it’s such a swell place to work, the labor pool probably isn’t going to be as full as they might expect.  Will that be Butts-Mehre’s watershed moment?  Or the fan base’s?

I knew that game sucked.

If you want to look at the 2014 regular season as a giant bracket for the playoffs… then Georgia was knocked out by Georgia Tech.

You know you’ve got an appetite this morning.

Filed under Because Nothing Sucks Like A Big Orange, Georgia Football, Pac-12 Football, SEC Football

“The pay’s too good. Nobody wants to retire and give that up.” 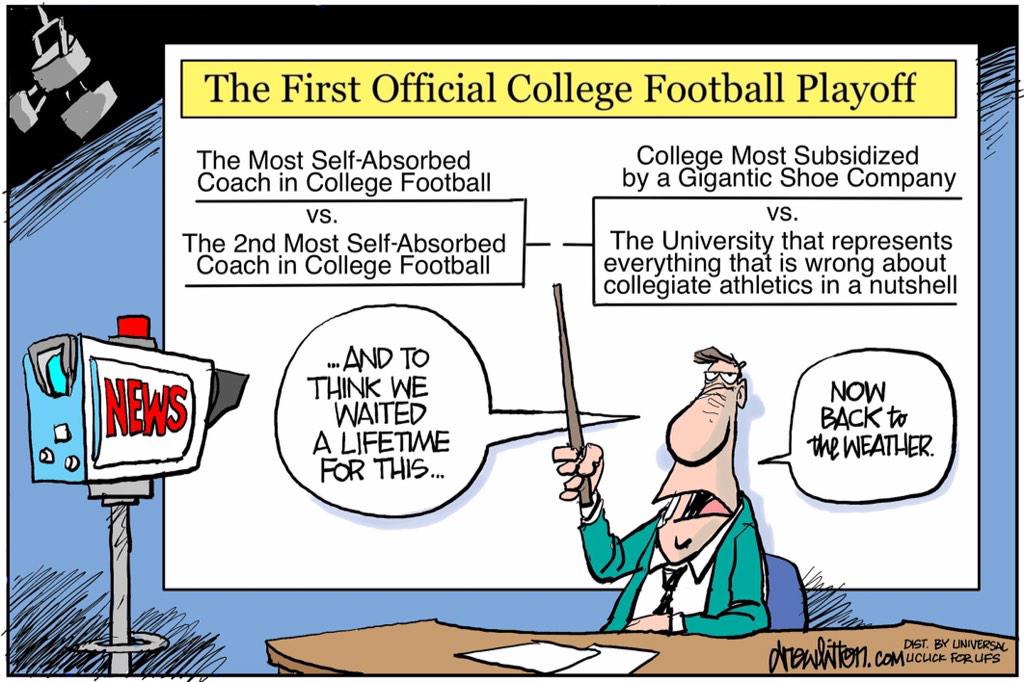 McCarney believes the stress level in coaching has risen because of the exorbitant salaries coaches are getting and the vast outlets fans have to voice their opinions. According to USA Today, 51 of 128 FBS coaches make at least $2 million this year. In 2006, there were 10 $2 million coaches.

“It’s self-imposed, and obviously you want to win and want to be successful, no doubt, knowing that the world watches everything you do now,” Mc-Carney said. “Who are we kidding? Not everybody thinks he can be a banker or a Realtor or a doctor or a lawyer, but everybody thinks they can coach. Everybody in the stands does.”

Unable to shut off his brain, Navy’s Ken Niumatalolo, 49, says he struggles to fall asleep.

“You’re constantly thinking of things at night,” said Niumatalolo, who will take Navy to a bowl game for the seventh time in his eight seasons. “How can you recruit better? What are some red-zone things we can do better? Our facilities aren’t good enough. What sports drinks should we be drinking? There’s a plethora of things that eat at you.”

On the other hand, there’s something to be said for a healthy perspective.

Stress is all relative, says Virginia’s Mike London, a former Richmond police officer who once had a gun pointed at his face by a man who had robbed a store. Had the gun gone off as the robber intended, London said, he would likely be dead. Comparatively, calling a play on third-and-7 is relaxing.

“When I say relative pressure, it is just that,” said London, 54. “One is a finality, the other you get to live to see another day.”

Or you could simply revel in being an asshole.

Of course, winning remains the biggest antidote to stress. As Spurrier said, there really wasn’t much stress during his dozen years at Florida.

“Not only were we winning, we’d win big nine of 12 games every year,” he said. “So many games, we clobbered the other guy. It’d be the fourth quarter. We’d empty the bench, everybody would be laughing and giggling, and everybody got to play. We’ve even played our scout team…”

More stress for the OBC these days, though.

Spurrier joked that he slept a solid seven hours two nights after South Carolina’s regular-season finale, the first time he’d slept that much in about six weeks. He said a doctor has prescribed him medication to help him sleep and “help my mind slow down” during the season.

And he doesn’t play golf during the season anymore.  The horror!