Shorter NCAA Division I Board of Directors chairman Nathan Hatch:  If Congress and the POTUS give our schools permission to continue to do the same unlawful shit the courts are telling us we can’t, I suppose we’ll just have to put up with it.

It never hurts to speculate.

There are lots of ways to recruit negatively.  You don’t have to come right and say this program sucks, or that coach is gone.

Sage Hardin, a 3-star offensive lineman from Marist high school, said he was offered by Ole Miss on Tuesday night. Hardin has been committed to UGA since earning a camp offer last summer.

“I would have appreciated the offer from Ole Miss earlier,” Hardin told the AJC. “Once Coach Bobo and Coach Friend left, Ole Miss started getting in contact with me again. I wanted to be polite. They were always one of my favorite teams before I committed to Georgia. I had a very strong relationship with Coach Freeze and some of the other coaches. I listened to what they had to say.

“They were respectful of my decision. They were saying a lot of ifs — ‘If I was to de-commit’ or ‘If the new OL coach doesn’t like you as much as we do’ … it was just a bunch of possibilities that are highly unlikely to happen. And that’s basically why they extended the offer. They loved the way I played. I think they have a fear that one or two of their offensive linemen might de-commit (from Ole Miss). And I think they just wanted to come back after me with Coach Friend and Coach Bobo leaving.”

I kinda like the reverse flip there about Ole Miss’ fear of de-commitment.  It goes to show that two can play at the “if” game.

UPDATE:  And here’s an interesting variation on a theme.  Georgia is negatively recruiting against itself.

“The (UGA coach) was like, ‘I don’t want you to be mad at Georgia or anything like that. The new coaches are getting situated here. We’ve looked at a lot of film, and we want you.’ They said they couldn’t see how the old coaching staff didn’t offer me.”

Baby, even the losers…

Let’s give thanks to Big Game Bob.

Wow, the hits just keep on coming for Nick Saban.

The off-season coaching attrition continues at the University of Alabama has BOL has learned that outside linebackers’ coach Lance Thompson will accept a job offer from Auburn coach Gus Malzahn as part of new Tigers’ defensive coordinator Will Muschamp’s defensive staff.

Dude is another helluva recruiter who’s gone.  And to Auburn?  Whoa.

Nick Saban doesn’t have time for that shit, but he’ll have to make some now.

And this last month before signing day just got very interesting indeed.

Filed under BCS/Playoffs, ESPN Is The Devil, It's Just Bidness, Political Wankery, Recruiting, The Body Is A Temple, The NCAA

They all look the same dressed in crimson.

You know how it goes – one minute you’re all hot and heavy, in pursuit of Kirby Smart, and the next you wind up with Kevin Steele as your new defensive coordinator.

Wait, what?  Les Miles goes from John Chavis to the guy whose last bit of work as a defensive coordinator was… er, this?  Feinting at Smart and winding up with Steele is the hiring equivalent of one of Miles’ patented fake field goal calls.  Sometimes they work and sometimes they blow up in his face.  That being said, it’s only fair to note that Saban obviously likes having Steele on his staff, and that can’t be a bad thing.

Perhaps the biggest thing in Steele’s favor is that he is one of the best recruiters in the country.  He was extremely well paid at Alabama as a position coach because of his value on the recruiting trail.  Saban is going to have to make some short-term adjustments in the wake of his departure a month before signing day.  Speaking selfishly, anything bad for Alabama in that regard can’t hurt in Athens. (Rico McGraw, maybe?)

But it’s not like LSU needs a whole lot of shoring up on the recruiting front, anyway.  And as for the rest of what Steele brings to Baton Rouge, as Billy at As The Valley Shook puts it, “I suspect his hire will go over like a fart in church.”  It’s certainly going to draw a fair amount of skepticism.  Cam Cameron had better step his game up in 2015, just in case.

UPDATE:  If this report (“Per multiple sources, Ed Orgeron is expected to accept a position on LSU’s staff later today.”) is true, then the Hat is all in on the recruiting front.  Should be entertaining to see the Cajun edition of Wild Boys. 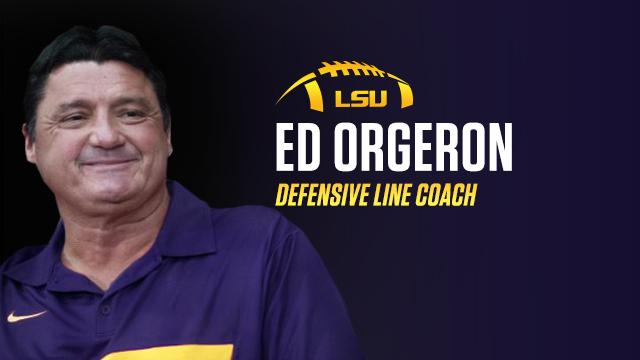