Notes from a scrimmage

So the first 2015 scrimmage is in the books.  Contrary to my jokey post yesterday, Richt did release a fair amount of information about it and where things stand in many areas at this point.

First, here’s a stats summary.  So there’s that.  It should be obvious that the stats from any scrimmage that ended without Nick Chubb generating any yardage – or touches, for that matter – should be taken with a grain of salt. And it’s clear if you listen to what Richt had to say yesterday about the scrimmage, that he took the numbers in context.

Still, there was more to take away from yesterday than I expected.  On to the bullet points:

Anyway, that’s what I saw.  What about you guys?

Name that caption: scene from a scrimmage edition

Guess who came back for a look. 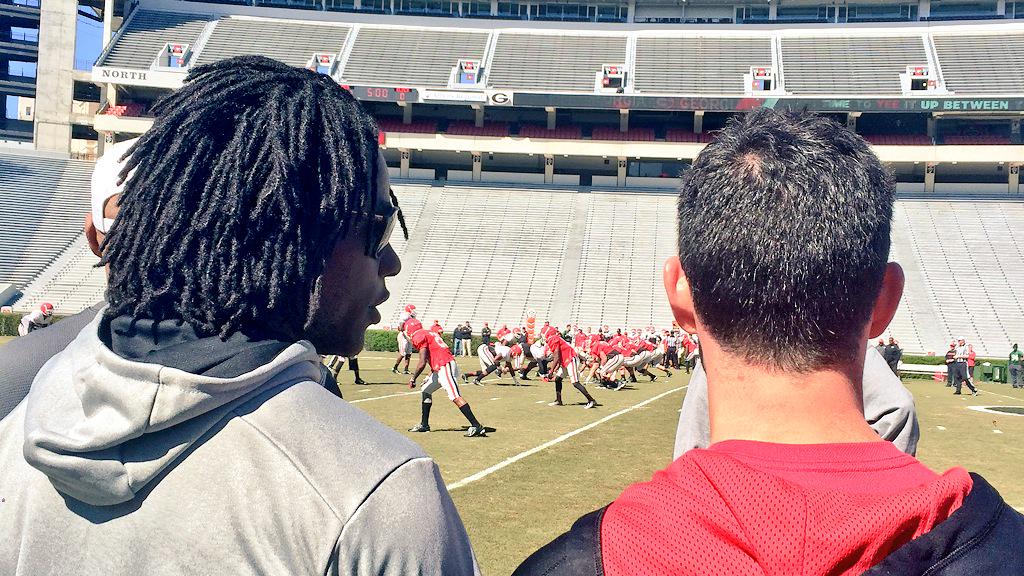 I figure they’re either swapping ACL stories, or trying to figure out who had the best QBR.

Of course, your observations are welcomed in the comments.

“So don’t let that new guy tell you he ain’t got any players.”

If Jim McElwain actually starts a full-blown pissing match with Boom, he will immediately become my favorite Florida coach of all time.

Filed under Recruiting, The Evil Genius

Is there a Fourth Chance U out there?

If ever there’s a moment when Mark Richt says to himself, “there but for the grace of God go I”, it’s probably about now.

“We recruited this young man out of high school,” Alabama coach Nick Saban said in February. “We felt that what we knew about him, what his high school coaches said about him, from what people at the school he was at said about him and where he came from in junior college that he was the kind of guy that deserved a second chance. “But with that chance we also have stipulations and things that he needs to do from a personal-development standpoint so that he won’t make any kind of mistake like this again. That’s an on-going process with him. That’s something that we continue to monitor, and it’s something he’s done a very good job with.”

So much for the Process. You can assume Taylor’s gone, because Saban doesn’t have time for that shit. But tomorrow’s presser ought to be epic.

One fact is clear about Jonathan Taylor. Nick Saban used terrible judgement and Alabama has been badly embarrassed.

Zero-tolerance for some who was already in trouble with the law? Hokay.

UPDATE #3: Mark Schlabach rips Saban and ‘Bama a new one. And here’s a great quote:

Make no mistake: Alabama’s decision wasn’t about rehabilitation and second chances. It was about winning, and now the Crimson Tide look like big losers — from the top down. It’s not like Alabama is Louisville, where Cardinals coach Bobby Petrino seems to take any SEC reject as he tries to build his program. The Crimson Tide have the pick of the litter when it comes to recruiting. For whatever reason, they chose a troubled prospect with fleas.