Name that caption, the raccoon look is in edition

You would think a guy coaching in Florida would know about sunscreen.

Do not adjust your monitors. 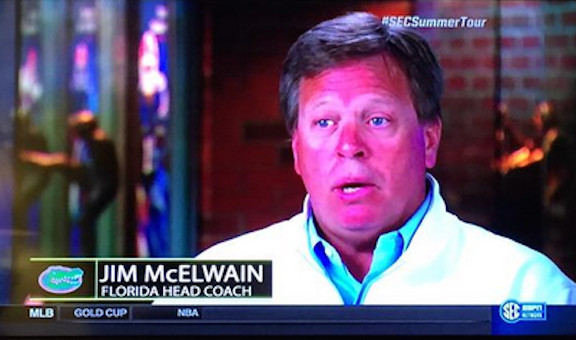 I keep saying it, but McElwain is slowly making himself into a rare creature – a Florida coach I don’t dislike. That makes him dangerous.

Weiszer is on the mother.

Aside from what’s noted there, the big news is that Ramsey is listed at first-team by his lonesome.  Keith Marshall is third-team at tailback.  McKenzie has grabbed one of the first-team receiving slots.

UPDATE:  Pay no attention to that depth chart my staff went to all that trouble to compile!

Just so everybody understands, our QB race is wide open and we will decide on a starter sometime during preseason practice! Go Dawgs!

It wouldn’t be SEC Media Days without memes, part four.

Predicting the pecking order is a given, of course.  It’s embedded into the proceedings with a media vote.  Not that the vote is particularly accurate.

“I know you all pick a winner in the conference every year and that you’ve been wrong 18 out of 22 times,” Saban said before last year’s ballot had been revealed. “Every year that we’ve been fortunate enough to win the championship, you picked somebody else to win it.”

There are a couple of subsets to this chatter.  One is the quarterback situation at most of the schools contending for a trip to Atlanta.

Who is the starter?

Neither Alabama nor Georgia – two of the presumed favorites to win the SEC – has a solidified starting quarterback yet. Alabama’s race appears to be between Jacob Coker and David Cornwell, but expect Nick Saban to be reluctant to provide any additional information when pressed this week. Georgia is a three-player race involving Brice Ramsey, Faton Bauta and Virginia transfer Greyson Lambert. If either of these two schools is going to meet lofty expectations, picking the right starting quarterback will be crucial.

Having a surrounding cast strong enough to ease the pressure on that pick may be even more crucial.  Which is probably why Alabama should be the favorite.

And how ’bout that SEC East, ladies and gentlemen?

The future of the unstable SEC East: Until further notice, the pick to win the division must to be Missouri. Right? Right? Two years in a row, the Tigers have made a lot of us look like fools. There’s no reason to go against them now … unless the likes of Florida, Georgia, South Carolina or Tennessee step up.

The pride of the Show-Me State is the pick unless those traditional powers show us they can break through. Georgia likely will be the media favorite coming out of Hoover with the aforementioned Chubb and a stout defense. Tennessee has dynamic young talent. Florida can’t be that bad again offensively, can it? Does the Ol’ Ball Coach make one last push before retiring to a perpetual 19th hole?

It wouldn’t be SEC Media Days without memes, part three.

What’s going on at Ole Miss?

The Rebels find themselves in the news for the wrong reasons with star left tackle Laremy Tunsil involved in a domestic dispute with stepfather Lindsey Miller. After the incident, which Ole Miss said was Tunsil protecting his mother, Miller stated the Ole Miss junior received impermissible benefits during the recruiting process. The NCAA is now reportedly investigating the situation and head coach Hugh Freeze is going to get a lot of questions about it this week.

What’s the over/under on the number of Tunsil questions Freeze gets thrown his way?

Bonus question:  do you think Mark Richt gets asked to comment?

Filed under SEC Football, The NCAA

It wouldn’t be SEC Media Days without memes, part two.

When South Carolina coach Steve Spurrier takes the podium Tuesday, he will be extending his record of SEC Media Days appearances to 23.

Georgia’s Mark Richt will be making his 15th visit when he appears Thursday, which will tie former Tennessee coach Phillip Fulmer for the second-most visits. Fulmer would have made 16 trips but sat out in 2004 after learning that lawyers who were suing the NCAA planned to subpoena him.

Yeah, but that was then, in the somewhat misty past.  What about lately?

Is this Spurrier’s last hurrah?

Few can entertain the way South Carolina coach Steve Spurrier does at media days. The ‘Ol Ball Coach is always quick with a quip and never hesitates to needle his rivals. But after a somewhat disappointing 7-6 2014 season, there are questions to how much longer Spurrier will coach in Columbia.

Maybe he can change the subject to the Confederate flag.

It wouldn’t be SEC Media Days without memes, part one.

And so the masses converge on the center of the college football universe, Hoover, Alabama, today.  Assuming Clay Travis can’t find anyone’s sexual history to be of note and that no process servers are roaming around the hotel to serve subpoenas, I’m afraid we’ll have to settle for more mundane nourishment.  There are several themes around which the media seem to be converging, and we can expect to hear them asked in a myriad of ways that are bound to drive Nick Saban into full “I don’t have time for this shit” mode.

The first, and perhaps most obvious?  The SEC ain’t what it used to be.

This used to be the week America’s most self-congratulatory college football conference would gather for a fresh round of pomposity. It was served up in large, Southern-sized portions, and washed down over four days with an intoxicating champagne of success.

It’s not simply the flair with which the SEC has held its annual preseason media event that lent itself to arrogance, or the sheer size (the SEC famously announces how many media members attend each year), but also the steady stream of proclamations over four days about the SEC’s singular and exclusive greatness.

During the seven-year stretch in which the SEC owned the national championship and set the agenda for all of college sports, it was difficult to mock or even dispute the way this league carried itself into every season.

This time, though, there is no air of inevitability around the SEC. Something has changed. As the league kicks off its season this week just outside of Birmingham, it is very much fighting for the reputation it has enjoyed for the last decade.

When Auburn’s Gus Malzahn arrives at the podium Monday morning to start the parade of 14 head coaches addressing media members, you probably won’t hear any acknowledgement that the SEC has slipped — or, depending on how you look at it, that other conferences have caught up.

How the mighty have fallen, in other words.

It’s a little early to be shoveling dirt into the conference’s grave, of course.  On the other hand, this seems like fair criticism:

But there’s no doubt the SEC going into last year enjoyed some benefits of incumbency. Between Alabama, Auburn, Ole Miss, and Mississippi State, the best non-conference wins they had came against Boise State, Kansas State and Memphis.

Maybe somebody should have paid more attention to that last season.  Going into 2015, I do think it’s likely the conference has lost a little of the benefit of the doubt as a result.  But that’s fixable with a few wins in the right places.

Yeah, he said this about Junior:

I don’t care who you root for, that’s some funny stuff there.

“We will do better. I will not tolerate anything less.”

Andy Staples points out two big differences in the circumstances surrounding the arrests of FSU’s De’Andre Johnson and Dalvin Cook.

Fisher now has the chance to back up that statement by sending a message to his players. Dismissing Johnson was a no-brainer. The freshman from Jacksonville was caught on video, and he had the misfortune of being one of five scholarship quarterbacks. Simple probability suggests he was headed for a position change or transfer anyway. Cook, a sophomore from Miami, is another story entirely.

Without Cook, the Seminoles might not have won the ACC title in 2014.

No film and an important player.  I look forward to the wheels of justice in Tallahassee grinding slowly towards a proper resolution.  Is it too late to get Cook on the FSU baseball team?

The truth comes out: why Laremy Tunsil isn’t a Georgia Bulldog.

Sworn testimony at last week’s hearing (h/t) that eventually led to a protective order against Tunsil being dismissed:

… Desiree Tunsil alleged in court Friday her husband cussed her and got physical with Laremy Tunsil, then a minor, at a San Antonio hotel in January 2013 following a disagreement over a meal shared with members of the University of Georgia football coaching staff.

Tunsil played in the U.S. Army All-American Game in San Antonio. NCAA rules allow a prospect’s parent(s) to dine with coaches, but the Georgia staffers would not have been able to (and did not attempt to) pick up the tab.

PAWWWLLL, Saban would never let a damned Mexican dinner come between him and a five-star kid.

If you need a good chuckle, read the rest of the article.  Let’s just say that life with the Tunsils must be interesting.  It’s hard to judge who’s the most full of shit between the three of them, but Lindsay Miller’s got at least this much right:

Miller said in his closing statement… if Tunsil “weren’t an NFL prospect next year, we wouldn’t be here, your honor.”