I genuinely believe the interview with @MarkRicht was one of the most memorable we've ever had. So much respect. 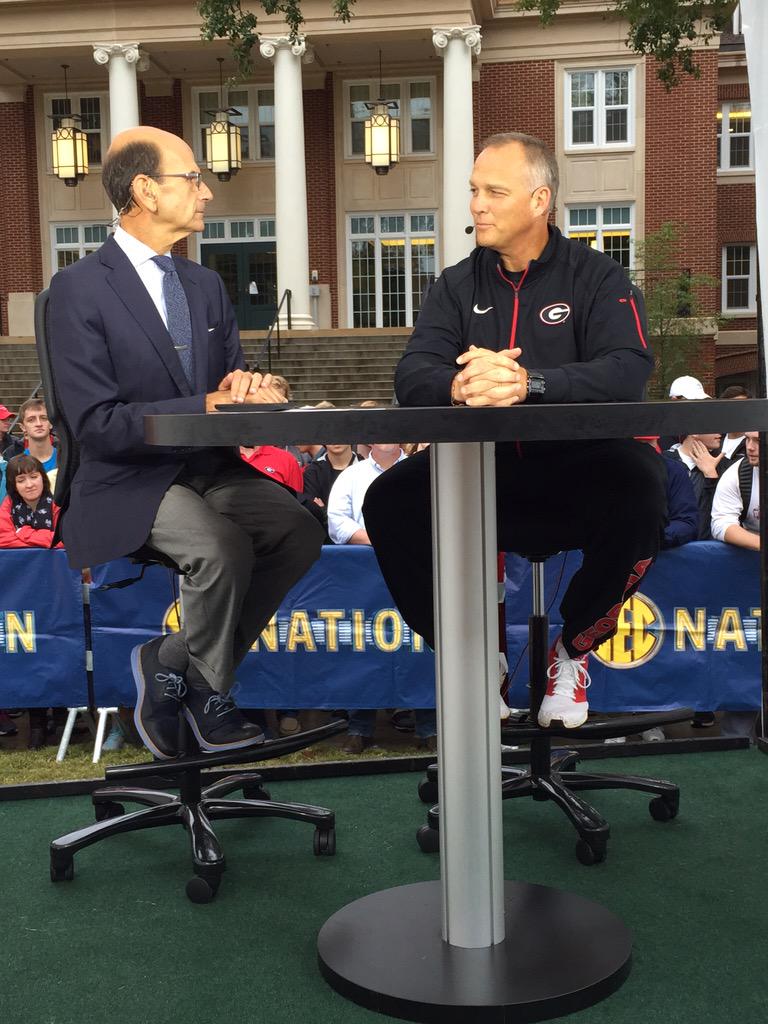 Another in a series of excellent posts at Roll Bama Roll this week, this one does a little film study breakdown of what Georgia did against South Carolina and notes, in particular, how similar Pruitt’s approach is to Saban/Smart’s.

It catches something I missed, too – Roquan Smith picking up the tight end on the play Leonard Floyd blew up early in the game.  More of that to come as the season progresses, I suspect.

Every time Alabama doesn’t give the ball to Derrick Henry, it’s a win.

Alabama offensive coordinator Lane Kiffin has called passes on 53% of plays this season, well above the 46% from the last two seasons.

Some of this increase in passing come from situational football, as Alabama trailed Ole Miss for the entire second half. However, this increased tendency to throw even with questions at quarterback marks a shift for this program.

It’s not a good idea to throw that much against Georgia. In my rankings based on yards per play adjusted for schedule, Georgia has the 4th best pass defense but the 50th ranked rush defense.

Kiffin seems stubborn about throwing the ball. In last year’s playoff semi-final, Ohio State also had a better pass than rush defense. However, Kiffin still called more passes than runs despite racking up over 6 yards per carry.

Stubborn?  Stubborn is good.  I wonder if the Laner is sitting in staff meetings telling Saban he handled Georgia’s defense just fine the last time he coached against the Dawgs.

Because you can never have enough numbers to digest for Saturday…

Hey, if you can’t trust an Auburn man to give you an unbiased look at a Georgia-Alabama game, who can you trust?

Along those lines, Jerry Hinnen contributes a couple of interesting data points.  The first is an advanced stat.

Advantage Georgia — explosive plays: So if the Bulldogs allowed 3.4 yards more per play to ULM than Alabama did, surely their net per-play advantage vs. the Warhawks wouldn’t have been close to the Tide’s, right? Nope: while the Tide trudged along to just 4.5 yards per play vs. ULM, Georgia went for 8.4 — meaning their net per-play number against the Warhawks finished at plus-3.8 to Alabama’s plus-3.3. And led by Chubb’s ridiculous per-carry numbers — 8.44 yards across 71 attempts — the Bulldogs’ explosiveness didn’t end there; for the season, Georgia’s second in FBS yards per play, tied for first in points per-play, and — of you’re the advanced-stats type — 13th in Bill Connelly’s IsoPPP, an explosiveness measure. Alabama? They’re 67th in IsoPPP, 62nd in yards-per-play.

And on defense, though the advanced stats suggest Georgia might be vulnerable to giving up the occasional big running play, the struggling Tide aerial attack seems as likely to yield a big play for the Bulldogs as for Lane Kiffin’s offense. Jeremy Pruitt’s secondary has allowed just one touchdown pass in its last three games, and none longer than 29 yards all season; meanwhile, the six interceptions thrown by Alabama quarterbacks ties for the 11th-most nationally.

And he’s got a counter to that Vegas take on the two schools’ records against P5 teams.

… recently, Georgia’s been just fine in the biggest games on its schedule, going 15-7-1 against the spread since 2011 as a favorite of fewer than 10 points. Meanwhile, Alabama’s just 6-10 ATS in its last 16 games vs. Power Five opponents, and a poor-by-its-lofty-standards 11-5 straight-up.

I’m beginning to think there’s a piece of information out there to support just about any take someone has on the game.

If you choose to read only one thing today, make it Jon Solomon’s thorough and lengthy “How a changed Mark Richt is evolving Georgia into best of ‘Bama, Bowden” piece.  It touches on a number of themes we’ve already discussed here at the blog, but what it adds that’s worth your attention are several direct quotes from Richt’s brother-in-law, Kevin “Chappy” Hynes.

Here’s what he had to say about the addition of Jeremy Pruitt to the staff.

“Jeremy Pruitt has been a very big catalyst in some of the changes that have happened at Georgia. You don’t have to be an investigative reporter to know that.”

… “I think Jeremy Pruitt is wired in such a way that what happened is he came to Georgia, wants to be the best, saw some real needs and made them know,” Hynes said. “He has upped the ante.”

And here’s what he said about the support Richt’s gotten from the athletic administration over the years.

When Georgia’s $30 million indoor practice facility opens near the end of 2016, the school will be the last in the SEC to have built one. For a while, Richt hit some ceilings with university administrators who were set in “some old Georgia ways” regarding needs for the football program, Hynes admitted.

“Once (the new assistants) came here, it’s like, ‘We need this, we need that, and we came from programs that had this,’” Hynes said. “It gave Mark more wisdom, more understanding, more of a shot in the arm to say, ‘We need this.’ He ran into roadblocks, but this new staff said, ‘Let us help you push through these roadblocks.’”

“I don’t think ‘nice’ has anything to do with whether he can win a national title,” Hynes said. “It’s X’s and O’s and Jimmys and Joes. … The academics at Georgia, the urine (drug) tests at Georgia, the facilities at Georgia — I don’t know if we’ve ever been given as good a chance as others. I ain’t crying in my Wheaties, but when you look at the totality of what (Richt) has been through, bro, that guy is a winner.”

It’s not from the horse’s mouth, but I have a hard time believing Hynes said all of that without Richt’s knowledge and/or consent.  And that, too, is more evidence of a changed Richt.

“We grew a nation from three pillars, two words, and one heart. #BeatBama”

Georgia’s hype video for Saturday is entitled “The Storm”.

Given the approaching weather conditions, I’m not sure it would have been my first choice for a title, but the video kicks.

Georgia – Alabama is shaping up as Gary Danielson’s kind of game.

“I think this has the makings of one of those really good decision football games that we were used to seeing in the 80’s and 90’s. This will be different from the modern game of spread football where whoever has the ball last wins.”

If there were a Danielson drinking game for Saturday, popping one every time he expresses that sentiment would probably have me on the floor before the end of the third quarter.

In one corner, we have Dave Bartoo.

That’s what Dave Bartoo’s scoring efficiency model projects for the critical Southeastern Conference game at Sanford Stadium. Bartoo, the founder of the terrific CFBMatrix.com, pushes aside statistics like yards and instead zeroes in on just the scoreboard.

Entering Saturday’s game, Georgia is No. 1 in Bartoo’s overall team scoring efficiency rankings. Why does that matter? The winners of the last 10 national championships all ranked in the top three in either offense or defense scoring efficiency…

“Even though there is a difference in almost 18 plays per game, Georgia’s points per play — their efficiency — is 41 percent higher than Alabama,” Bartoo said. “People like to look at the yards and these points per game by Alabama versus Georgia, but when it comes right down to it, every time the ball is snapped Georgia, scoring-wise, is 41 percent more efficient than Alabama.”

And in the other, Bill Connelly.

They both can’t be right.

The keys in this game, per Bartoo, will be third-down conversion and first-half scoring. Alabama’s offense has been awful converting third downs through four games, but its defense ranks 23rd in the country. Georgia is averaging .8 points per play and will likely run about 30 plays in the first half if one goes off the averages headed into the game. If Georgia meets those averages in the first half, Bartoo says Alabama will lose.

“If they are over 24 points, the game is over, and they are smoking Alabama,” he said. “I think for Alabama defensively, I think you need to see UGA’s efficiency cut in half. The early first-half number is 14 or less to see if they are really chopping at Georgia’s offense.”

If Georgia scores 24 points in the first half, I will be one happy camper, that’s for sure.

College football has the runs.

Good Jon Solomon piece on how college football is trending on offense so far this season here.  A few highlights:

On that last point, Georgia may be bucking a trend.  Through the first four games of 2014, the Dawgs averaged 45.25 ppg.  This year, there’s an ever so slight increase in that average to 45.5.

But the overall story there is one of more scoring, more offensive efficiency and less throwing to do so.  I wonder how much of that can be chalked up to personnel and how much to deliberate strategy.