My team is better than your team.

A name that caption two-fer

‘Bama made it nine in a row over Tennessee yesterday.

The satisfaction of victory?  Derrick Henry’s got that covered.

The agony of defeat?  Hi, Peyton. 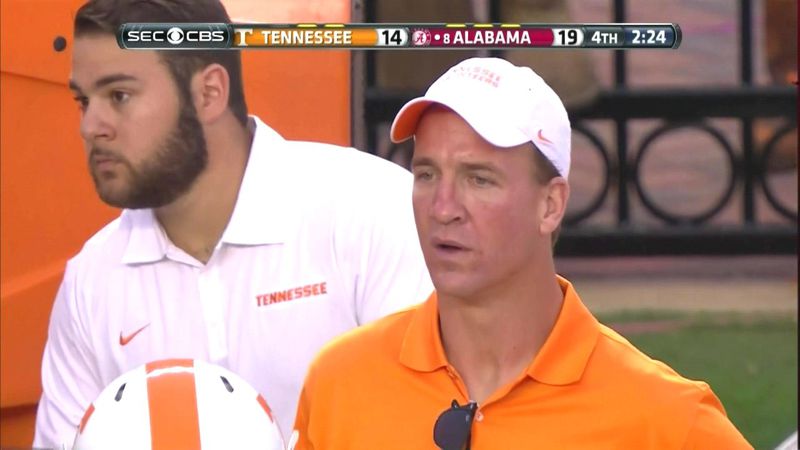 Feel free to embellish in the comments.

What we learned on our bye week

Just a few random impressions from a Dawgless Saturday:

The AB-H does some scouting, whips out an Open Records request to find out how much love Morehead and McGarity were getting from the fan base during the losing streak, and discovers,

McGarity and/or UGA president Jere Morehead received 38 emails or letters relating to Richt and the football program between Oct. 3, the day Georgia lost to Alabama 38-10, and Oct. 14, four days after the Tennessee loss, according to an open records request by the Athens Banner-Herald and OnlineAthens.com.

Of those, 28 either wanted Richt fired (“When the season is finished, perhaps we should make an offer to Kirby Smart of Alabama to be our next Football Head Coach,” one alum wrote), changes to be made or expressed unhappiness with the team’s performance. Four wrote to express support for Richt.

Others wrote about the way players acted in a pregame incident with Alabama, complained about the Sanford Stadium atmosphere, or the condition of the field at Tennessee.

I’d love to know how that compares to the flow of complaints at peak “run the damn ball, Bobo!”.  Judging from McGarity’s attitude, it doesn’t sound a lot different.

“You know probably starting Saturday night into Sunday into Monday, your inbox is going to be full of people expressing their thoughts,” McGarity said.

Some can’t wait, sending them at halftime.

Halftime, eh?  I’ve probably sat near a few of those folks.

Scott Ripley wrote two days after the Tennessee loss that he no longer planned to buy season tickets, because he did not think Richt could lead Georgia to another championship.

“I’m the only one that’s fed up enough,” he said with a laugh when told he was the only fan to threaten to not renew tickets.

Talk is cheap, bud.  Get back to us next year after you don’t renew.  Then maybe I’ll start taking the threat more seriously.

Had it all the way.

This is the look of a man whose team ended a five-game losing streak by beating the No. 9 team in the land on the flukiest of game ending plays.

what did we learn today? COPS GOT HIM BUT PAUL JOHNSON NOT GONNA LET IT RUIN HIS NIGHT. https://t.co/KBH3updd8j

As I said last night,

So it turns out there's a worse way to lose to Georgia Tech than a botched squib kick. Thanks, Noles.

Here’s a good argument for not getting married in the fall.

Congrats to Chip and Carrie. pic.twitter.com/vD44sL4Kwe

Nothin’ says Alabama football wedding like a boot-wearin’ bride.  And maid of honor.

This is a legit wedding. pic.twitter.com/1yCP1jJkmH

Or a wedding guest wearing a Speedo.

Nice.  And they’ll have these memories to share for the rest of their lives.