They pull me back in.

When it comes to Nick Chubb’s chances at playing early this season, decades of Georgia fandom reinforces every skeptical instinct I have about that, and yet here’s Seth Emerson tempting me to rise above my innate pessimism:

Nick Chubb’s health is really the biggest football story of Georgia’s spring so far. Yes, he’s only been taking carries in non-contact drills, tending only to run straight ahead. That’s a long way from being able to change direction and get tackled in a real game.

But it’s also a long way from a couple months ago, when merely no longer needing crutches was the story.

Tae Crowder, the redshirt sophomore, also appears to have taken advantage of more reps this spring, with Brendan Douglas (wrist) also limited, and starter Sony Michel protected. Smart has been worried about not having enough healthy bodies at tailback, but that’s a short-term problem. It’s looking more likely that he’ll have his star back in some limited form for the start of the season.

“But in our law, tragedy does not equal liability.”

In the Derek Sheely case, the NCAA continues to be hoisted on its own petard.

A Maryland judge on Wednesday denied summary judgment to the NCAA in a lawsuit over the death of a former Frostburg State football player, setting the stage for a potential trial in June.

In a significant opinion reflecting how concussions are evolving before the courts, Montgomery County Circuit Court Judge David Boynton ruled that the type of head injury that allegedly killed Derek Sheely — second-impact syndrome from multiple concussions — is not a known inherent risk of playing football. Second-impact syndrome has been described as a condition that occurs when the brain swells rapidly after a person suffers a second concussion before symptoms from an earlier one have subsided.

The NCAA argued that since it’s a sports organization it has no legal duty to protect college athletes. Boynton acknowledged that is true under Maryland law for sports organizations, but determined the NCAA has a “special relationship” since its mission statement is to protect college athletes. Boynton said since there’s not an obvious risk inherent to football, a legal duty to warn exists, and there’s enough dispute in the Sheely case for a jury to hear the arguments.  [Emphasis added.]

Holding Mark Emmert accountable for his own sanctimonious bullshit?  Man, that’s not fair.

Viewership is up across the board. The SEC set an all-time record across all conferences with 7,784,376 fans in 2015, leading all FBS conferences in average attendance for the 18th consecutive year with 78,630 fans per game.  There were attendance records set at lower levels of CFB, as well.

Of the reams of data to go through at the linked article, here’s one that deserves a lot of attention:

I guess free TV still has its upside.  Advantage:  SEC (and to a lesser extent, Notre Dame).  Think they’re dumb enough to give that up?  For the right amount of Mickey’s money, sure.

Filed under College Football, ESPN Is The Devil, SEC Football

Kirby Smart presser: you had me at “four points”.

Right out of the gate, listen to Smart explain yesterday’s exercise in practicing situations where the offense starts deep in its own territory:  “… we try to explain to the kids that if the defense holds ’em and they gotta punt from their own end zone, it’s been an average of about four points per time you stop ’em…”

Schwiing!  Give me that kind of attention to detail, even statistical detail, from a coach who’s got a grasp of what he wants to get out of his players and you’ll make a happy camper out of me.

By the way, dial up the clip to the 6:45 mark and listen to Smart respond to a question about satellite camps.  Is that the ghost of a smile on his face as he talks about having a plan ready in response to what Harbaugh and Meyer are doing?

“So we’ll be prepared for it.”

Kirby Smart is ready to join the land rush if the NCAA doesn’t move to restrict satellite camps.

“We’ve looked into it as a staff, we’ve got a plan ready to kick in if it happens,” Smart said after practice Tuesday…

“We’ve got to be prepared,” Smart said . “That’s there and it’s like waiting in the brink and it’s like who’s going to be first and who’s going to go where…but we’ve got to be careful because we’re not going out right now and saying where we’re going. If it happens, we’ll be ready for it. We’ve got some decisions to make because it’s tough decisions.”

Beyond channeling his inner Boy Scout, what’s different about Smart’s tone there is that he’s not approaching this as if it’s merely a veiled threat about what’s going to happen if the NCAA doesn’t put its foot down on Jim Harbaugh’s neck.  (Smart on Harbaugh’s and Meyer’s satellite camp plans:  “I think it’s very smart on their part,” Smart said. “They’ve got a right to do it and like I said we’ve got a plan ready. You’ll see soon enough.”)

He just recognizes this as another area he can’t allow himself to be bringing up the rear.

“Ultimately, every SEC schools wants these kids on their campus,” Smart said. “I don’t want to have to go to them, but if it gives somebody a competitive advantage to go to them then we may want to do the same thing.”

The interesting thing about this Jason Butt story on Georgia’s new offensive coordinator and offensive line coach is that, contrary to what many of us thought, it wasn’t that Kirby Smart wanted Sam Pittman and went after Jim Chaney to help reel Pittman in.  It was, apparently, just the opposite.

Smart long felt like Chaney would be an ideal offensive coordinator to work with back when he was at Alabama. Smart even said Chaney’s name would come up as a potential coordinator option every so often when there was a vacancy.

So naturally, Smart reached out to Chaney to gauge his interest on the Georgia offensive coordinator job. Chaney responded but wanted his old buddy Pittman to come along if he could.

“He felt strongly about coach Pittman,” Smart said. “He’d worked with Sam so many times. They were a great tandem.”

And, no, I’m not sure how the Dan Enos story fits in to that narrative… except I imagine it gave Kirby some degree of pleasure to discover that Pittman didn’t have a non-compete clause in his contract.

In any event, it does sound like the two mesh nicely with what Smart wants on offense.

Smart’s philosophy on offense is that it all starts up front with the line play. Having two assistants so like-minded and on the same page helps, considering the two can operate seamlessly…

“When I interviewed those two guys it was really a no-brainer to hire them,” Smart said. “The fact they came together, and got a nucleus, I knew the next three positions I hired on offense, they would be able to work with them. There would be some continuity there. And I’d have some flexibility to hire good recruiters from this area, from this state, like (running backs) coach (Dell) McGee, (special teams coordinator and tight ends coach) Shane (Beamer) and (receivers coach James) Coley. Those three were more flexible once I got the key cogs.”

Given that Georgia’s breaking in its third offensive coordinator in three seasons, it can’t hurt.

“Stick your finger down your throat so you can throw up.”

In case you can’t tell, I’m a sucker for Tracy Rocker stories. 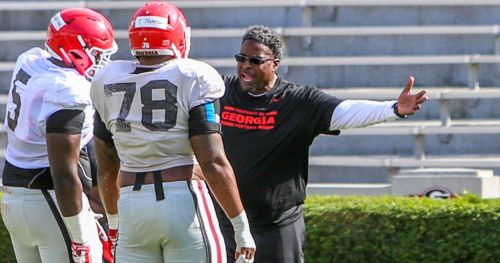 If you were on the receiving end of that, tell me you wouldn’t get the next rep right.