The Republic is saved!

The Council approved a proposal applicable to the Football Bowl Subdivision that would require those schools to conduct camps and clinics at their school’s facilities or at facilities regularly used for practice or competition. Additionally, FBS coaches and noncoaching staff members with responsibilities specific to football may be employed only at their school’s camps or clinics. This rule change is effective immediately.

I wonder if Corch bought non-refundable plane tickets for his Georgia trip this summer.

“But the football oversight committee recommended to the council and the council is supporting action now,” he said. “It is what it is. We made our case for holistic vs. ad hoc. You have to accept it. That’s part of the (system) we signed on for. No reaction beyond that. You always would like to win rather than to lose a vote — I don’t care whether it’s in a court or legislature or an assembly of people. You go with the system that’s in place, and so I support that, respect that and move on. (Coaches will) pick up recruitment; satellite camps are off the table, but presumably everything else is on it. “

I can’t even begin to tell you what that’s supposed to mean.

Filed under Recruiting, The NCAA

You can see why Mike Slive was considered such a marketing genius, can’t you?  With those demographics, any of my kids could have engineered a better TV deal than the first one Slive cut.

Hey, everybody, ESPN’s back with those stats with initials!

The Football Power Index (FPI) is a measure of team strength that is meant to be the best predictor of a team’s performance going forward for the rest of the season. FPI represents how many points above or below average a team is. Projected results are based on 10,000 simulations of the rest of the season using FPI, results to date, and the remaining schedule. Ratings and projections update daily.

FWIW, Georgia’s ninth in FPI, which sounds nice, except that’s only good for fifth-best in the SEC, which doesn’t sound as nice.

I only mention this because it’s early April and I’m bored.  You can ignore this proprietary measurement for the rest of the season now.  Except when the WWL is shoving it in your face, that is.

Got an email this morning I thought I’d share with the class.

I am working on putting a trip together to take my father to his first Georgia home game in almost 40 years. We both currently live in Maryland, and for my dad’s 60th birthday my brother and I are planning to take him to the Nov. 12th game versus Auburn. But my brother and I have never been to Sanford and it’s been so long since my father has been that we don’t know anything about anything. Whether purchasing tickets, finding good seats, getting adequate parking, etc.

Is there a resource(s) you would recommend for information on how best to attend a Georgia home game?

This brings up something I probably should have done a long time ago, with your help:  create a page here at GTP that’s basically a shopper’s guide to the game day experience in Athens.

Here’s what I’m inviting y’all to do:  In the comments section, please chime in with hints, suggestions, real life experiences and whatever regarding (1) buying single game tickets; (2) parking; (3) where you prefer to sit at Sanford Stadium; (4) places in Athens where you like to eat and/or imbibe before and after football games; (5) where you shop for Dawg paraphernalia; (6) tailgating locations; (7) things and places to avoid; and (8) any other miscellaneous items you think are noteworthy to take in to make for an enjoyable day in Athens.

After the dust settles, I’ll try to organize everyone’s suggestions into a coherent form and post it on a page as a permanent resource.

“But the culture’s still the same.”

While we’ve seen a host of examples of how the culture in the way the Georgia football program interacts with the outside world has morphed in just a few short months (and, no, I won’t bore you with a recital of the details here), it doesn’t sound like there’s been much of a change inside the program, at least according to some of the players.

Michel and Blazevich were two of the three players Smart approved for interviews after Thursday’s practice, the only day players are available this week. Reporters poked and prodded, trying to elicit evidence of a massive change in the program. They wouldn’t play along.

And talk about your total bummer…

But it (sic) a noticeable difference how detail-oriented the coaches are now?

What the hell, Sony.  I’ve been hanging my hat on that for two months now, and suddenly poof!, it’s gone?  Is that any way to treat a blogger?

What’s the opposite of happy talk, anyway?

It looks like Gus Malzahn will be the coach moving to the front of the hot seat line this season.  And with a track record like this…

The idea of a coach being on the hot seat 27 months after he played for the national title to end his first season seems ludicrous, but remember, this is the program that fired Malzahn’s predecessor, Gene Chizik, 22 months after he won the national championship in his second season. The Auburn family wants what it wants, and it wants it now.

… who’s to say that meme is wrong?

There’s a report of another Baylor player under investigation for sexual assault.

The school president admits he’s lawyered up about his institution’s repeated problems in that area.

So what does that leave?  How about a nifty sign at the practice field? 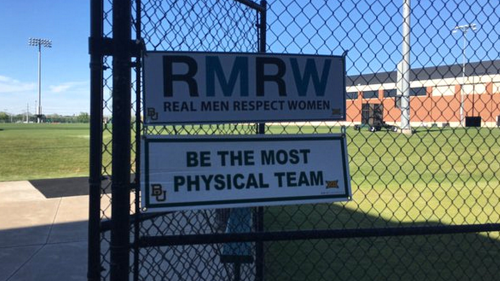 That ought to take care of the problem.