They’ll be back to Athens in June and turn their attention to summer workouts and gearing up for the season opener against North Carolina Sept. 3 in the Georgia Dome.

It’s the kind of big-name opponent to open the season that coach Kirby Smart has said he prefers to line up.

“It’s a little easier sell,” Smart said. “When you walk in the weight room and you know you’ve got to play UNC the first game, there’s a commitment level I think is greater than other years. That’s one of the advantages of playing in that game.”

… The flipside of not opening with a lightweight is the danger factor.

“You’ve got a great opponent so you don’t know what you’ve got yet,” Smart said. “You’ve got to find out for real the first time you go out there. It’s not an opponent that’s a lesser classification or anything like that. It’s a situation you better be ready to play.”

As a fan, choosing to play an opener against a cupcake or a decent P5 program is a no-brainer for me.  I get how a coach’s perspective may be a little different.  (We know an AD’s is.)  But even so, I’d think that “find out for real the first time” factor would trump getting the likely win.  Not to mention that Smart’s right about improved focus.

The NCAA just wants to be loved.

In the motion filed earlier this week, the NCAA said the “public perceives potential judicial bias” because Judge Frederick Shaller graduated from USC.

“While it is unlikely the NCAA can ever receive a fair trial — just miles from USC where students and alumni publish vitriolic, hateful messages about the NCAA with each case development — the court should guard against any public perception of bias arising from a trial judge’s ties to USC,” the motion said.

Shaller rejected a similar request by the NCAA in March, noting the issues raised by the organization weren’t “legal grounds for disqualification.”

In this week’s filing, the NCAA cited years-old news stories about the case in addition to anonymous postings on message boards and comments below stories.

It added that “even mainstream media has vilified the NCAA…”

If disliking the NCAA is grounds for moving the case, they’re gonna have to go far, far away.  Can you move a California trial to Timbuktu?

#TruthDontLie. It just gets covered up. 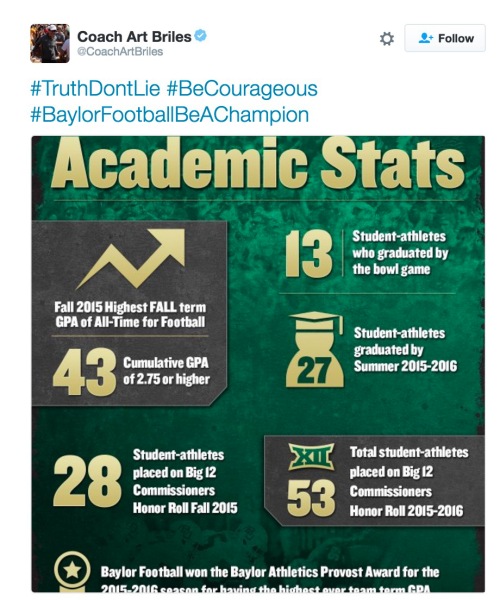 Meanwhile, for some unknown reason, the AD took to the airwaves to answer some questions about the cesspool the school has fallen into.  The results were beyond awkward.

Baylor AD Ian McCaw on @SiriusXMCollege if there was any cover-up collaboration b/w Baylor & Waco Police: “Not to my knowledge”

McCaw on what is the right action when a victim comes forth with allegations of sexual assault: “That’s a Title IX matter.”

I am reminded of the old joke about the difference between apathy and ignorance here, except McCaw doesn’t strike me as much of a kidder.

Meanwhile, the Waco Tribune-Herald seems to have awakened from its slumber.  (Don’t take my word for that.  Andy Staples writes, “On Thursday, Baylor athletic director Ian McCaw told SiriusXM’s Full Ride show that there was no cover-up of which he was aware. He may be correct, but only for the most pathetic reason. Cover-ups aren’t required when no one is looking. The beat writing corps that covers Baylor isn’t the most aggressive. Had these incidents taken place at Ohio State, Texas, LSU or any school that draws major coverage, they’d have been reported on almost immediately. Reporters would have noticed names on police blotters, or they would have team or police sources that would leak that sort of information. ESPN would not be uncovering incidents from years earlier because they would have been reported on all along. No one was looking at Baylor, so Baylor coaches and officials continued to make terrible decisions without being questioned about them. This doesn’t excuse anyone, nor should it lessen any punitive action that might be taken, but it helps explain how this mess continued for so long.”)  The newspaper requested reports received by the Baylor University Police Department of sexual assaults and other improper sexual conduct during the past 20 years back in February.  After reducing the scope of that Open Records request, the paper was faced with the school’s refusal to release the information.

Instead, Baylor asked the Texas Attorney General’s office to weigh in on its obligations.  The result was mixed.

In an opinion received by the Tribune-Herald on Thursday, Assistant Attorney General Ellen Webking wrote that portions of some documents submitted to her office by Baylor must be released. Webking wrote that other records Baylor claims must be withheld under the Federal Educational Rights and Privacy Act were not ruled on because Baylor did not submit examples of those reports based on student privacy concerns.

The opinion does not clarify which aspects of the reports should be withheld.

Gee, it must be nice to set your own rules like that.

“I think it is interesting that Baylor asserts that FERPA precludes them from releasing information from law enforcement records but they didn’t submit any documents to the attorney general’s office to review because they say FERPA prohibits them from sharing those documents. I guess they are asking you to take their word for it,” Maddox said.

Well, the Texas AG is a Baylor grad, so why shouldn’t he?

These people make Greg McGarity look like a PR master.  The sad thing is they’ll all probably weather the storm.

Life may not be fair, but it’s complicated.

Chip Towers catches up with the former Georgia player who’s one of the plaintiffs in the new wave of concussion-related lawsuits filed earlier this week, and it’s just so sad.

In an interview with The Atlanta Journal-Constitution on Thursday, Hermann said he suffers from severe memory loss. He said he has been undergoing medical treatment and getting tests from neurologists and his family doctor to try to determine if the symptoms that he suffers are the result of chronic traumatic encephalopathy (or CTE).

However, Hermann did not want to talk about the specifics of his case due to the pending litigation.

“This thing has taken on a life of its own,” he said before going off the record. “I’m a very private person. … I’ve had reporters calling me all week and I’m like, ‘this is not what I was signed up for.’”

Hermann would say only that his cognitive skills have been deteriorating rapidly over the last several years and blames it on 18 years of playing football, and those three years in Athens in particular.

In the suit itself, Hermann claims that he suffered “numerous concussions” while practicing and playing special teams for Georgia in from 1984-86 and has suffered memory loss as a result. The suit specifically references a hit Hermann took on a kickoff in which he “saw stars.”

Georgia is not named specifically in the suit. It targets the NCAA and the Southeastern Conference.

Dignity, a love of the program… and the realization that something stemming from his playing days is wrong and getting worse.  I’m not sure how I would handle all of that were I in his shoes.  Wishing him the best seems inadequate, but it’s all I have to offer.

Filed under Georgia Football, See You In Court, The Body Is A Temple

Can’t tell the coaches without a scorecard.

This summary of the coaching staff changes in the SEC this offseason is amazing, not just because Ole Miss is the only program without a single new coach, but also because only three others didn’t replace a coordinator.  Makes you wonder how chaotic the early part of the season will be, as both opponents and the new coaches themselves acclimate to their present surroundings.

Since early this spring, the thinking among many insiders, including this reporter, has been that ultimately Lambert would be the starter against North Carolina. As for wunderkind Jacob Eason, the question was whether he would get in that game, or get a chance to take over later in the season.

But lately there have been whispers from people around the program that the Eason talk is legit, that he has a real chance to start the opener. (Not Smart, who is wisely being careful with his public comments.) You can temper the G-day performance all you want by pointing out it was against the second team – and, well, it was – but what you haven’t heard is people behind the scenes saying Eason wasn’t that good in the closed scrimmages or practices. You hear the opposite. He is that good.

If you’d like some time by yourself now, I understand.  Come on back after you’ve cleaned yourself up.