Fun times at the Georgia Dome

Who knew there was any kind of amusing story to tell about tomorrow night’s venue?

The coaching box at the Dome, Bobo said, “is up high, but you’ve got a good view up there. When you go three-and-out and your fans start turning around and throwing stuff at the booth and yelling things, sometimes you’ve got to stay focused.”

Maybe that’s why both coordinators will be on the field with Smart.

Shall we play a game?

I’m officially taking a temperature reading with this post.  We had less than two dozen folks participate in last year’s Mumme Poll, and, frankly, it’s not worth the trouble to run it for that few number.

And given that I satisfied myself a few years ago that approval voting was a less biased way to rank college football teams, the only reason Tidefan and I keep the Mumme Poll going is for the sheer enjoyment of participating.  So, unless there’s sufficient interest in keeping the MP in play, I intend to shutter it for good.

Let me know in the comments if any of you are still interested in casting ballots.

Talent will out. Or will it?

To illustrate further a point made in my previous post about Lambert, please see this chart compiled by David Hale: 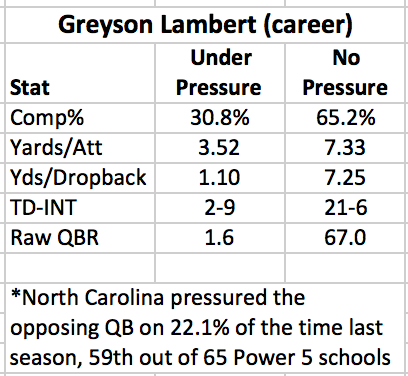 As we used to say in law school, res ipsa loquitur.

UPDATE:  I asked David what “under pressure” means.  Here’s his response.

Sacked, hurried, hit or under duress. It's ESPN's metric. https://t.co/Bkwmw2KfMr

And before you say, all quarterbacks are worse under pressure, here’s some context for his performance.

Seems to me if Chaney can figure out a way to overcome that, there’s some better than average upside to be gained here.

“We’re going to start the game with Greyson.”

Yeah… so what about that?  Well, first things first.  Process gonna Process, and that means going with the guy you think will screw things up the least.

“They made it very difficult in the way they practiced and prepared and Greyson has done a good job leading it, communicating it, executing it and doing all those things. Jacob has shown great promise and has continued to improve. He’s done a lot of good things. We’re excited about both those guys.”

Fret if you will over last year’s memories, but I doubt this is a decision that was reached casually.  Let’s not forget that Smart was on the other side game planning against Lambert last season.  If he’s able to put that in the past, perhaps you should, too.

For all the qualms we have had, and still have (let’s be honest), about Lambert, remember he’s now convinced two different coaching staffs that he should be Georgia’s starting quarterback.  Seth Emerson does a fair job of explaining what that means.

The decision to start Greyson Lambert may not excite fans. There may be a shrug in the Georgia Dome when he’s announced, and if and when Jacob Eason enters the game, there will be a resounding cheer.

But within the team, according to many who speak off the record – because talking about quarterbacks publicly is verboten – Lambert’s leadership and smarts have always been a source of respect. That’s why he’s going to start. Again.

Two separate sets of coaches, it should be pointed out, have now reached the same conclusion on Lambert. Last year, Mark Richt and Brian Schottenheimer made the surprising choice of Lambert over Brice Ramsey, then stuck with Lambert for all but one game – the ill-fated Faton Bauta decision against Florida.

Smart and Chaney then arrived, and at least when it came to Lambert and Ramsey, reached the same conclusion. Ramsey was the one eliminated when the competition was cut down to two, and Lambert was good enough that he’ll at least start the first game over Eason.

What do I think this call demonstrates?  Quite a few things, actually.

Not that Penn State is paying attention.

“… because nobody thinks we can stop the run.”

For those of you who think Kirby’s been playing eleventh-dimensional chess with Gene Chizik with the way he’s handled the quarterback question, I’ve got some bad news for you.  North Carolina isn’t paying attention.

The Tar Heels know exactly what Georgia is going to do in this game, especially with a healthy Chubb and questions at quarterback.

“We just have more of a pinpoint focus on stopping the run,” Jones said. “This Georgia team — they’re not going to pass the ball if they don’t have to, so we definitely have to show up and stop the run. That’s been our focus, especially on the D-line. It starts with us.”

That is the message defensive line coach Tray Scott and Chizik have hammered home since the offseason began. Nobody on the staff or the team wants a replay of what happened at the end of last season.

This is a fresh start, and a new opportunity to make a statement against one of the most well-known rushing teams in the country.

We can argue about Lambert and Eason until we’re blue in the face, but if the offensive line can’t block any better than it did last year, it’s not going to matter.

“That guy was a god in Atlanta.”

Georgia’s loss has been Miami’s gain. Richt has come home, and South Florida has embraced his return.

“His arms are open to former players and the community, and it’s just beautiful,’’ said former UM cornerback Tolbert Bain, 52, with whom Richt conferred about his plan to regularly visit youth football programs throughout South Florida. “I want to send the Georgia athletic director a fruit basket for doing us this great favor.’’

Among the many ways UM has benefited even before Richt’s opener against FAMU at 6 p.m. Saturday:

▪ Hurricane Club membership has exceeded 10,000 for the first time and reached an all-time high $12 million through its annual fund.

▪ Fund-raising for a $28 million to $30 million indoor practice facility, for which Richt pledged $1 million, has been strong.

▪ Former players are reinvigorated by Richt’s insistence on their inclusion in UM’s events and culture.

▪ Overall fan exuberance, with Richt’s avid support of the community, is palpable.

“It’s the direction we want to go — back toward the top,” UM athletic director Blake James said. “Since last Dec. 4, when we announced Mark’s hiring, there has been a real wave of energy around the program.”

Said Richt of the “outpouring” of support: “It has been a little overwhelming.”

Maybe you can go home again.  After all, everybody has hope.

Opening night in the SEC East

— “Never going to apologize for a victory,” Butch Jones told SEC Network after the game. “That’s a very good football team that we played and I’m hoping that this will compel us to grow up a little bit as we continue to move forward.”

Yeah, that’s the kind of thing a coach tends to say after his three-touchdown favored team ekes out a win in overtime against a mid-major opponent.

Welp, less than 30 minutes in, and the SEC East is already covering itself in glory.

It didn’t get any better over the next three hours, either.  I doubt Greg Sankey’s gonna be doing much chirping about the SEC today.

I watched some of both games.  Here are a few of my observations.

South Carolina 13 Vanderbilt 10.  Okay, it wasn’t quite the 3-2 shitfest I was half-expecting, but it was close.  The two teams combined for less than 600 yards total offense and it wasn’t because the defenses were all that dominant.  Vanderbilt is trying to run Stanford’s smash mouth offense without a dominant offensive line.  That’s a bad combination.  South Carolina’s most dynamic player on offense is an undersized true freshman quarterback who is going to have a tough time surviving the season.  I’d call them the two worst offenses in the conference, except I haven’t seen Missouri play yet, so I have to withhold judgment.

It occurs to me that I gave the ‘Cocks short shrift in one area in my preseason predictions, that being special teams.  South Carolina’s pretty good there.  The punting game controlled field position well after Vanderbilt’s second (and last) score and Boom called on Fry to kick a 55-yard field goal for the winner, which, fortunately for the viewing audience, he nailed.  If he hadn’t, given the way the two offenses played, they might still be in overtime this morning.

Tennessee 20 Appalachian State 13 (OT).  Sure, the Vols embarrassed themselves last night.  But they escaped with the win and if they win the next few, nobody is going to remember or care in a month.  That being said, if I’m a Tennessee fan, there are three things to take away from last night that are going to leave me in a state of unease.

First, it was astounding to see how poorly the offensive line played against an undersized opponent.  I  know the o-line wasn’t expected to be one of the team’s strengths this season, but there’s a difference between that and looking totally outclassed against an inferior opponent.  Maybe it was just a bad night, but maybe they just suck.  We’ll find out pretty quickly.

Second, Josh Dobbs finished the game with a passer rating of 115.3.  Against Appalachian State.  Based on last year’s showing, that would seem to indicate that his game hasn’t taken a step forward.  Numbers aside, his play last night showed him to press when things weren’t going well, which led to him turning the ball over twice (one of which was bailed out by Hurd’s recovery of a fumble in the end zone).  If Dobbs is in fact the SEC’s second-best quarterback, based on last night, we’re in for a world of hurt this year.

Third, one of the big preseason question marks about Tennessee this season was whether Jones is capable of preparing his team mentally to play championship-caliber football.  Last year, his team clearly wasn’t, as it dropped several fourth-quarter leads in blown games.  Teams that are mentally and emotionally ready to play show that in their opening game, even against lesser opponents.  That was not the case against Appalachian State, as the Vols looked like a team that thought it could win simply by stepping on the field.

Jones can talk out of his ass today.  After all, his team got the W.  But if I’m playing UT, I know what I’m doing with my defensive game plan — sell out against the run and do whatever I have to do to make Dobbs beat my team with his arm.  If mistakes can be avoided on the other side of the ball, I like my chances.  We’ll see if Booch can tighten all the loose screws in time to handle some pretty good defenses in Tennessee’s next six games.

College football is back. Finally, a chance to step away from the maelstrom of campaign news for a few hours and focus only on the glory and struggle of sport, free of any political implications whatsoever.

As it turns out, even football games affect the way we evaluate politicians, at least in the short-term. New research by three Northwestern University political scientists finds that when a team wins a big game, its fans’ euphoria translates into higher approval ratings for the president. The loser’s fans, however, take it out on the president, evaluating him less charitably.

That’s probably enough to make some of you to wish Georgia struggles this season.