Kirby Smart tells the story of visiting the New England Patriots’ place of work.  I’m not sure this part comes out the way it was meant to:

“So throughout the day – I realized that when I went to the bathroom, they posted over the urinals, in the restrooms, and over the doors before they close: DO YOUR JOB,” Smart said. “So I’m kinda getting the message here.”

I don’t think I want to know.

Pittman will take whatever blessings he can get in that regard, I’m sure.

Here’s a quick hitter from ESPN on early departures from the SEC East.

These two are the only teams in the SEC East that are losing multiple underclassmen to the 2017 NFL draft. Florida was hit with five departures, including four on defense: linebacker Alex Anzalone, defensive tackle Caleb Brantley and cornerbacks Teez Tabor and Quincy Wilson (offensive tackle David Sharpe was the fifth departure and lone offensive player to declare for early entry). That’s a lot of talent on defense to lose — Brantley, Tabor and Wilson are all projected first-round picks based on Todd McShay’s rankings. Tennessee lost three: its best defensive player (defensive end Derek Barnett), its leading receiver (Josh Malone) and its all-purpose yardage leader (running back Alvin Kamara). Barnett will be the hardest to replace, with 32.5 sacks over the last three seasons (best in the nation) but all three were productive for the Volunteers.

The Bulldogs got some huge news when running backs Nick Chubb and Sony Michel opted to return for their senior seasons. These days, running back draft prospects often leave early — because too many carries can adversely affect one’s draft stock — but Chubb and Michel bucked that trend and Georgia’s offense will reap the benefits in 2017. Linebackers Lorenzo Carter and Davin Bellamy and safety Dominick Sanders also said they’re returning, so the Bulldogs made out pretty well, with receiver Isaiah McKenzie being the only key underclassman to declare.

It’s a strong draft class for running backs but to see three of them — Chubb, Michel and Vanderbilt’s Ralph Webb — decide to come back was a bit of a surprise. Chubb and Michel were especially surprising given their past injuries and Chubb even admitted he considered leaving because of the uncertainty that lingers mentally after his 2015 knee injury. Webb has more carries than any other SEC running back over the last three seasons (739). Their teams certainly welcome them back with open arms, and they’ll be key parts of any success the Bulldogs or Commodores have in 2017. Kamara (Tennessee) and Stanley “Boom” Williams (Kentucky) were the two key SEC East running backs who decided to declare for early entry.

Bottom line:  it’s a big gap closer for Georgia.  No, it’s not everything, but that plus recruiting should make for an interesting reordering of talent in the division over the next couple of seasons.

As someone who’s run a fan blog about Georgia football for over a decade, I rarely feel the need to explain myself any more, as there’s plenty of material posted here to do that kind of lifting.  But in light of recent comments I’ve seen here questioning my support for Kirby Smart, it seems like one of those moments is upon me.  So let me take a couple of minutes to clear the air.

I said immediately after Smart’s hire — actually, I think I may have even posted the sentiment before the hire — that Kirby is Georgia’s head coach and that in and of itself makes him worthy of my support.  End of story.  Nothing in that regard has changed; to suggest that I’m rooting for him to flop out of a sense of cynicism, or bitterness arising from Mark Richt’s dismissal is ludicrous.  I’ve been a Georgia fan for decades.  I want Georgia to win games and titles, pure and simple.  Not only that, but my fandom clock is running late.  I don’t have time to sit through a mediocre four-year run and then wait to see if the next guy is the one to pull the program’s proverbial nuts out of the fire.

So, please, stop with that bullshit.

That being said, there’s a big difference between supporting the football program and the head coach and being critical of shortcomings in both.  I simply don’t see how the 2016 season is worthy of being exempt from criticism on just about every level.  That doesn’t mean there haven’t been positive developments, many of which I have noted on more than one occasion, or that there isn’t reason to have expectations for better times coming soon.  But I’m not going to sugarcoat.  It wouldn’t feel right to me and I doubt you’d appreciate my lack of honesty.

I will say that for those of you who claim to detect a rise in my level of cynicism about Georgia football, you may have a point, even if it’s misdirected.  What’s fed into that isn’t Smart’s first year performance, which in the cold light of hindsight, could have been expected.  It’s the organization to which Smart is a part.

2016 did nothing to change my opinion about how the athletic department is run.  If anything, it reinforced my worst impressions.  Talk about cynicism — the way B-M milked our enthusiasm over the new coach’s honeymoon period with the state legislature and our pocketbooks with increased ticket pricing in the face of mediocre home scheduling could teach me a few lessons.

Then there’s the process that led to Smart’s hire.  Feel free to dismiss it in your enthusiasm, whether that’s due to Smart himself, the importation of the Process, Richt’s dismissal, or some combination of the three, but I’m not of the same mind.  There’s a reason that matters, too.  Greg McGarity’s track record as an evaluator of coaches, when it comes to hiring and firing, is consistent in that he has yet to find a single head coach who’s delivered excellence.

Doubt me on that?  Check out the current Learfield Directors’ Cup fall standings, where Georgia stands a proud 71st.  That’s actually a slight uptick from the previous fall. Yes, Georgia’s standing will improve after the spring, largely because results from the quality programs with coaches who weren’t hired by McGarity, like swimming and tennis, will kick in.  But that hardly changes the underlying concern I have.

Maybe you can separate that, but I can’t. For one thing, it’s hard for me to accept that Smart escapes that history, other than as the result of sheer, blind luck.  Maybe that will turn out to be the case, but that’s one helluva way to run a railroad.  Speaking of which, that’s the other side of my attitude coin.  Even if Kirby Smart proves to be every bit the quality hire we hope he is, to succeed, he’ll have to beat fourteen SEC schools to do it — Georgia’s conference competitors and Georgia’s athletic department.  That’s a lot to ask of the guy.

So you’ll have to forgive me if I seem a little more negative at times than you’d prefer.  You’re not Kirby Smart, but don’t take it personally on his account.

If you start with the premise that, while Jacob Eason is a tremendously talented quarterback who had his expected struggles starting as a true freshman in the SEC, he is being counted on by the coaching staff, his teammates and the fan base to take the next step forward in his second season, then the question becomes what’s the lever that moves him there?  Is he sufficiently self-motivated to push himself to the next level, or is he someone who’s wired to do that by competition?

If it’s the latter — and as Eason enjoyed a stellar high school career without being pressured by competition, that’s far from a given — it’s a little hard to see where that might come from.  Lambert, who lost the starting position to Eason by the second game of the season, is gone.  Brice Ramsey, who wound up a second straight season as the starting punter, is by some accounts wavering between staying and going.

Then there’s Jake Fromm, the other five-star recruit who’s now sitting in quarterbacks meetings with Eason.  While you can never say never, it’s hard to see how replacing one true freshman who had to learn the ropes with coaches, players and an offense he’d never played in before with another who would have to experience the same learning curve would be a recipe for success.  You’d have to think the coaches are fervently hoping the light goes on for Eason, which would allow Fromm the benefit of a redshirt year getting comfortable.

But that gets me back to the question in the header.  If Eason needs to be pushed towards greatness, who’s gonna do the pushing?

I thought I was just kidding the other day when I mentioned that Tennessee’s AD search should turn its eye Phillip Fulmer’s way, but it turns out somebody’s taking that seriously.

The latest twist in Tennessee’s saga of a search for a new athletic director certainly is an intriguing one.

The possibility of former Volunteers football coach Phillip Fulmer becoming the university’s athletic director gained traction this past weekend, and ESPN on Monday reported that Fulmer was a “prime candidate” to replace the outgoing Dave Hart.

When reached for comment by ESPN’s Chris Low, Fulmer neither addressed the athletic director job nor ruled himself out as a candidate, according to the report.

“Since I was 18 years old, UT’s best interests have always been my interest,” Fulmer told ESPN. “I want what is best for UT. (New chancellor) Dr. (Beverly) Davenport has laid out a clear process, and we have to respect the time and her vision to complete that process.”

Tennessee’s search process, according to USA Today, has been “murky at best and highly political,” and now “a group of influential boosters have been working behind the scenes to help install” Fulmer as the new athletic director, the national newspaper said.

One can only hope for the resurrection of donut jokes, so I don’t want to get too far ahead of myself here.  Fulmer has no previous experience as an athletic director, but at Tennessee, I’m not sure he could do any worse in certain regards than the last two guys he would succeed in the position.  Certainly, he would usher in a new relaxed relationship with the local constabulary.

But all falls short of the single best take on his potential hire that I saw yesterday, which would be this.

@dawgsports
1. Fulmer hired as AD
2. Fulmer stabs Butch in the back
3. Fulmer installs himself as HC
4. Profit.#backtothefUTure

Now that’s an area where Fulmer has experience. 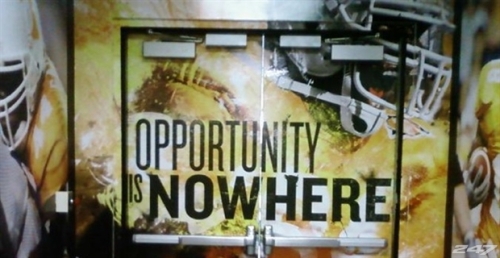