“You are looking live at…”

Filed under ESPN Is The Devil, SEC Football

About that o-line recruiting

In response to some of the comments generated by yesterday’s post about recruiting, Henry was thoughtful enough to throw together another chart, this one tracking the recruiting numbers and average ratings of Georgia’s offensive line recruits from 2002 onward.  Here ’tis (again, using Scout’s data):

Talk about your sea change in approach. There are more Top 20 commits in the 2017 class than there were Top 20 signees in the last six classes combined.

It may be the understatement of the year to observe that one of those classes is unlike the others.  (Although 2007 ain’t bad.)  But it’s still worth stating.  Wowser.

An offense by any other name…

Ian Boyd suggests events have overtaken the meaningfulness of using the expression “pro-style” offense and thinks a change in nomenclature is due.

Personally, I’d leave it up to Sheldon Richardson, if we need a new label.

I don’t think it’s much of stretch to say the ACC got the better of the SEC this past season.  There are plenty of reasons for that tossed around, although the two that appear to have gotten the most traction are the relative experience levels of the two conference’s head coaches and quarterback play.

The latter, especially, is hard to argue with, but it’s not as if the SEC wasn’t trying.

From 2012-16, SEC teams signed 39 four- or five-star quarterbacks, according to 247Sports. So far, only one of those recruits turned into a very important player who finished his career at the same school: Tennessee Volunteers ‘s Joshua Dobbs . Major SEC recruits like David Cornwell , Kyler Murray , Kyle Allen , Kenny Hill , Will Grier , Maty Mauk, Hayden Rettig and Zeke Pike have come and gone…

That, friends, is a boatload of whiffing.

The question going forward is whether the worm is about to turn again.

The SEC had one passer in 2016 ranked among the top 25 quarterback rating (Dobbs), according to CFBStats.com. The ACC had six (Pittsburgh’s Nathan Peterman, North Carolina’s Mitch Trubisky, Virginia Tech’s Jerod Evans, Watson, Kaaya and Jackson).

However, only Jackson will return from that group in 2017. The SEC will bank on the possible bright futures of Hurts, Ole Miss Rebels ‘ Shea Patterson, Georgia’s Jacob Eason, Florida’s Feleipe Franks, Tennessee’s Jarrett Guarantano and South Carolina’s Jake Bentley . Half of the top-14 rated quarterback recruits in 2017 are going to the ACC or SEC, including No. 2 Hunter Johnson to Clemson and No. 3 Tua Tagovailoa to Alabama.

Clemson and FSU will be okay, but you get Solomon’s point there.  Should be interesting to see how that plays out over the next couple of seasons.

On the recruiting trail with the Champions of Life

In a year with a record number of de-commitments across the college football landscape, Booch still manages to stand out.

Interestingly, though, only six of the 14 SEC programs have seen decommitment numbers increase this season from last, but a few of the jumps are enough to account for the difference: Mississippi State has had 10 decommits in this class, compared with just one last year. And the Tennessee Vols are leading the way with 13 decommits this year and 24 overall in the past two.  [Emphasis added.]

Recruiting the South these days reminds me of the old line attributed to Willie Sutton about why he robbed banks.  Every major school comes down this way because that’s where the studs are. 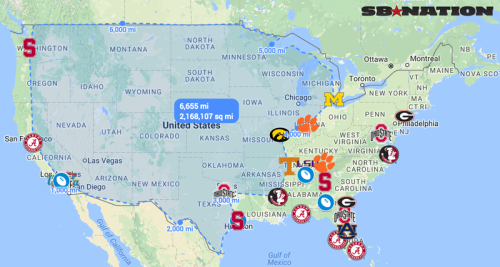 The primary reason Georgia has fared so well in this cycle is its dominance within state lines. Only a couple of weeks removed from watching Peach State high school legend Deshaun Watson lead a different program to a national championship, the Bulldogs are putting the finishing touches on a class that includes 16 of the top 26 prospects in Georgia. With rival programs in the Southeast (including Alabama) eager to make inroads into the state, it’s unreasonable to expect Smart to nab every target close by, but Georgia’s 2017 class bespeaks its local appeal and portends future success in one of the most fertile recruiting grounds in the country.

… both necessary and impressive.

The most dangerous man in college football

Forget about those friggin’ satellite camps.  It’s stuff like this that really gets the Greg McGaritys of the college football world’s panties in a wad:

LSU and Alabama both had two assistants at or above $1 million last season. No public school has had three at a time, according to USA Today research.

That’s not even the worst of it.  Drevno and Brown have five-year deals and Hamilton has a four-year contract.

The startled reaction many people had to that Monte Kiffin million-dollar-a-year deal back in the halcyon days of 2009 seems so quaint now.  Hell, 2014 seems long ago, for that matter.  Unless you’re McGarity having to defend the reserve fund against the next salary onslaught.

Filed under Heard About Harbaugh?, It's Just Bidness

Envy and jealousy, how we got here edition

Honesty compels me to say that this is the best two-paragraph summary of the last fourteen months of Georgia football I’ve read yet:

Georgia fired Mark Richt because of the widening gulf that existed between the Bulldogs and Alabama. The official word was that Georgia and Richt reached a mutual agreement on him stepping down, and there was no mention of the Crimson Tide in the program’s press release announcing the news. But it became clear by late November 2015, after 15 seasons under Richt, that Georgia was not satisfied with winning eight to 10 games every year and playing in Capital One Bowls while Alabama hung SEC and national championship banners.

The Bulldogs hired Kirby Smart away from the Crimson Tide to break through the plateau they had settled into toward the end of Richt’s tenure. His first year in charge brought mixed results: Seven wins in the regular season, a 4–4 record in the SEC, a surprising victory over Auburn, a disappointing loss to Vanderbilt. Far from providing the sort of immediate boost Georgia fans hoped for, Smart couldn’t take advantage of a favorable schedule to win one of the worst divisions in the Power 5 conferences.

Okay, maybe I would have clarified “Georgia” to read “certain Georgia boosters”, but given the overall picture there, that’s fairly minor quibbling.  Well done.

C’mon, you know you’re going to enjoy reading any article in which the genius is grousing like this:  “The conference tries to screw us every way they can…”