“Obviously Chaney’s a good coach or else he wouldn’t still wouldn’t be getting jobs.”

I think the word that best summarizes Jim Chaney’s career as an offensive coordinator is checkered. 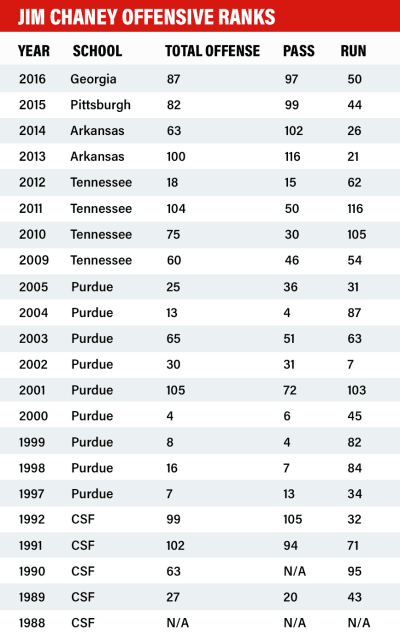 Some of that I would honestly say goes with what he had to work with, both pro (Drew Brees) and con (Derek Dooley’s personnel and Georgia’s last season).  As I’ve noted before, given the way he resurrected Nathan Peterman’s college career at Pitt, I also tend to think he’s a better quarterback coach than we give him credit for. There’s little question overall, though, that the results have been spotty and a lot of that falls on him.

The frustrating thing about reading Seth’s piece is that we get very little from Chaney himself about what his current offensive philosophy is.

“You’d love to be a downhill team, but you do have a young quarterback that has played in the gun more,” Chaney said last December. “So you have to find some happiness there. As we work through that sometimes it didn’t work out as well as we’d like to. There was a little contradiction with philosophies in regards to that, as we worked through it.”

That sounds like somebody who wasn’t doing things the way he preferred last season.

A few weeks later, on signing day, Chaney said he was looking to “freshen up” the offense. And there were signs of that this spring, using tailbacks, tight ends and receivers alike in the slot, indicating something new.

While that sounds like somebody who did some soul searching about his direction and recognized a need for change.  Who knows what Chaney really wants at this point?

43 responses to ““Obviously Chaney’s a good coach or else he wouldn’t still wouldn’t be getting jobs.””