This is Gawd’s way of telling you the athletic department has way too much time on its hands.

In case you missed it, and it’s hard to know how you could, UGA has announced that Dreamland BBQ will be among those added to the concessions at Sanford Stadium. This of course elicited an angry reason from two quarters:

Barbecue snobs, such as legitimate BBQ expert Andy Staples of Sports Illustrated, who has spent a good amount of his life arguing that Dreamland, as famous as it is, is at best the second-best source of barbecue in Tuscaloosa, after Archibald’s.

A segment of Georgia fans who are offended by what they see as another sign of the Alabama-ization of Georgia football. There are also those who wonder why a more local joint couldn’t have been involved.

UGA evidently felt the need to respond to all this. The UGA Alumni Association account on Tuesday tweeted out a profile from 2012 of Dreamland co-owner Betsy Underwood – a UGA alumni. The headline on the story: “Alumna brings a tasty Crimson Tide tradition Georgia.”

The official Twitter handle of Georgia athletics tweeted it out.

Really, fellas?  If y’all spent as much time working over the state of your athletic programs as you do the state where your stadium barbecue comes from, you might not have to fret so much about fan reaction to your choice of menu items.

People making a big deal of UGA bringing in Dreamland tells me they're really bored.

More to the point:  what does the athletic department’s need to respond to fan boredom tell you?

“No one in their right mind should have a football player’s schedule, and go to school.”

B/R: Look at the bright side: You got a chance to heal, maybe catch up on school.

Rosen: Don’t get me started. I love school, but it’s hard. It’s cool because we’re learning more applicable stuff in my major (Economics)—not just the prerequisite stuff that’s designed to filter out people. But football really dents my ability to take some classes that I need. There are a bunch of classes that are only offered one time. There was a class this spring I had to take, but there was a conflict with spring football, so…

B/R: So football wins out?

Rosen: Well, you can say that.

B/R: So that’s reality for student-athletes playing at a major university?

Rosen: I didn’t say that, you did. (Laughs.) Look, football and school don’t go together. They just don’t. Trying to do both is like trying to do two full-time jobs. There are guys who have no business being in school, but they’re here because this is the path to the NFL. There’s no other way. Then there’s the other side that says raise the SAT eligibility requirements. OK, raise the SAT requirement at Alabama and see what kind of team they have. You lose athletes and then the product on the field suffers.

I’m shocked, shocked that someone who plays the game would suggest that.  I’d be honestly shocked, though, if any school had a thoughtful rebuttal to this:

Any time any player puts into school will take away from the time they could put into football. They don’t realize that they’re getting screwed until it’s too late. You have a bunch of people at the universities who are supposed to help you out, and they’re more interested in helping you stay eligible. At some point, universities have to do more to prepare players for university life and help them succeed beyond football. There’s so much money being made in this sport. It’s a crime to not do everything you can to help the people who are making it for those who are spending it.

Note he’s not asking for a paycheck, just an honest effort to avoid exploiting the help.  Good luck with that… hey, look!  Waterfalls and shiny lockers!

The truly sad thing about the piece is the number of NFL folks who are freaked about a kid who is open like that.

One scout says Rosen doesn’t have a love for the game—that he lacks a certain fire and passion.

Scott Woerner would like a few championships now, if you don’t mind, Georgia.

Somebody needs to step up. I can do the math, and yes, 38 years since a championship in football is a hard pill to swallow. I watched quite a few NCAA championships this year and only heard Bulldogs mentioned a few times.

I am putting pressure on all the teams and coaches all the way to the AD. I am not getting any younger, and soon I would like to go watch a UGA championship game in any sport. And I would like to go to a concert or get on an airplane proudly displaying my school colors without having to eat crow or more appropriately, War Eagle, or Gator…

Why stop at the AD?

Hey, even we know Dreamland BBQ is really a @UOfAlabama thing. https://t.co/2vIJZJz326

Y'all must be trying to stay relevant lol y'all aren't even a real rival 😂 https://t.co/0eGcFbo5Jh

I can feel a whole new book of grievances coming on.

… Swinney said he doesn’t watch many Big Ten games during the season but felt the conference was overrated after watching Ohio State in preparation for the bowl game.

“Go back to last year. We’re trying to figure out a way to put four Big Ten teams in the playoff,” Swinney said. “And I didn’t pay no attention to the Big Ten. You just kind of buy it (the Big Ten hype), right? That’s just what’s out there. And then we get ready to play Ohio State and I start watching the tape, I watch every single game and I go in and tell our guys, I’m like, ‘Boys, these guys are in trouble.’ I mean, I’ve watched the whole league, I’ve gone through the whole league both sides, these guys are in trouble. And that’s exactly what happened.”

Next time your teams meet, Dabo, I’d keep an eye on how many timeouts Meyer keeps in his pocket in the second half.  Just sayin’.

Finally, Butts-Mehre is proactive about something.

Hot off the press, here’s a message from Georgia’s athletic director to everyone planning on attending a game at Sanford Stadium: 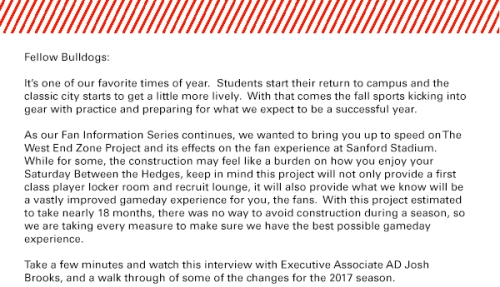 Brace yourselves for the next 18 months, peeps.  You’ve been warned.

We had sort of figured that out already, Jim.  So who is Jacob Eason?

Eason’s head was on a metaphorical swivel. He was constantly going to his coaches and veterans to make sure he did the right thing. He would look out to throw the ball to a receiver, but he wouldn’t be there.

“Last year I was a younger guy, I was still trying to learn the offense on the fly, I was trying to keep my head above the water in that aspect of it,” Eason said after Monday’s preseason practice. “This year I have more comfort in our schemes and our playbooks. So I feel like I can line guys up, I can tell them what to do, I can help them out when they run a wrong route, and that kind of thing.”

… To that end, a checklist emerges:

All well and good.  But he’s still got an offensive line situation that raises questions and a fair amount of turnover in the receiving corps that means timing is as much a work in progress this season as it was last year.

That he recognizes his shortcomings is a start.  That he’s making an effort to improve his game is necessary.  You still have to think that his best friend will be a consistent running game, but that happens to be one important matter that’s out of his hands.  We’ll see where it goes.

Some of the CBS pundits round up about 20% of the D-1 coaches to get their candidly anonymous answers to the musical question “How many college football programs do you believe knowingly break NCAA rules beyond minor secondary violations?“.

The answers are all over the place.

Really, that’s about as much insight as you could expect from a heated message board discussion on the topic.

Musical palate cleanser, it was the sixties, man edition

Big Sur, a swimming pool, swaying hippies, Crosby, Stills, Nash & Young… what else did you need?