“Oh yeah, I think he would in a heartbeat.”

I don’t want Booch out of Knoxville, but if this were the consequence of his being canned, I could definitely live with the trade off.  (Especially because it’s 50/50 he’d bolt Tennessee again if given the opportunity.)

Filed under Because Nothing Sucks Like A Big Orange, Don't Mess With Lane Kiffin

“We’ve done more things inside than we ever have and I think that’s helped.”

If Georgia manages to pull off an accomplishment that leads to rings for everyone responsible, would Greg McGarity present one to Jeremy Pruitt?

Nick Saban really doesn’t have time for this shit.

I bet the Coke bottle’s about to pop its cap.

“I just can not imagine a scenario where the committee is willing to put two from one conference in,” Herbstreit said. “Georgia looks great right now. Alabama does too. You talk about their schedule. Jalen Hurts is only getting better and more comfortable with Brian Daboll in their scheme. I just can’t envision those two teams both getting in and two other Power conferences getting left out. It would have to be an incredible unique situation.”

He really can’t.  But he’ll have a sad if that’s the way it goes.

“Even if they’re both deserving, its just hard for me to imagine the committee not recognizing and giving a Power 5 conference a chance to get into that playoff,”Herbstreit said. “I’m all about the best four. I don’t care what conference you’re in at all,” Herbstreit said. “I hope the committee does the right thing. To me, if Bama and UGA (are the best) when the dust settles, I just can’t watch the committee not give them a chance. And if they feel Georgia is one of the top four teams after watching the (SEC Championship) game, so be it, put it in there.”

Will I have to amend the Lexicon definition of the Herbstreit Doctrine?  Stay tuned.

I touched on this in yesterday’s review post, but, yeah, Georgia’s a monster in the third quarter.

So far in '17, @FootballUGA has been most dominant 3rd quarter tm at FBS level. They are outscoring opponents by just under 13 points in 3Q.

Halftime adjustments, for the win.

Paul Myerberg looks at the remaining schedules of the 20 P5 one-loss or unbeaten teams and rates Georgia’s the third-easiest of the bunch.

The rivalry game with Florida on Oct. 28 is bound to get interesting, but Georgia’s toughest matchups come on the road: at Auburn on Nov. 11 and at Georgia Tech to cap the regular season Nov. 25. But this is the sort of schedule that should have fans dreaming of a matchup with unbeaten Alabama in early December to decide the SEC championship.

Tech tougher than the Gators?  That ain’t right.

Alex, I’ll take “Things you don’t want to be reminded of if you’re Jim McElwain” for $200.

Yeah, this is not a good look.

Every week that goes by with the media extolling Notre Dame’s season, this looks better and better.

And in light of this,

Notre Dame has also been tremendously stingy when opponents have moved inside the Irish 20-yard line. Notre Dame leads the FBS with only one rushing touchdown allowed…

Get after that ATS.

This is kind of weird.  For all the conventional wisdom of the value of an off-week, Patrick Garbin discovered that, at least with regard to covering the point spread, there hasn’t been much value for Georgia in that at all. 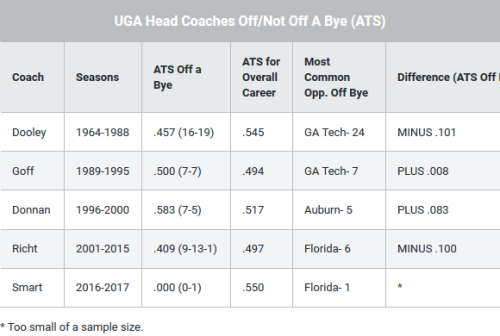 I assumed when I saw the headline to his article that it was all due to Florida, but it’s not.  It’s about Georgia.  Go figure.

Moreover, this has been trending even more negatively of late.

Therefore, beginning with the Tennessee game in 2008 and ending with Smart’s lone result following an open date (14-point loss to Florida last season as a 7½-point underdog), Georgia is a staggering 1-11 ATS in its last dozen games off a bye. Three of the 11 losses, the Bulldogs were favored by at least 6½ points and lost straight up. The one game they covered, barely covered, when as 2½-point favorites over Florida in 2011, Georgia won by four points. Notably, the 11 losses did not cover by an average of a lofty 11 points.

With nine of those twelve games in Jacksonville, you’d have to say that is about Florida.  Or, perhaps more accurately, Georgia’s mindset against the Gators.  At some point, that’s gotta change.