You know, that Smith kid’s not bad.

I posted those David Wonderlich tweets earlier about how an SEC athletic director won’t get challenged by hiring a Saban acolyte.  Here’s confirmation of that, straight from the horse’s mouth:

After all, in this current age of the SEC, where Alabama rules and Tennessee is cycling through a depression, Fulmer is eager to find the panacea for his ailing football program.

These days, there is no better place to look for that cure-all than in Tuscaloosa — once enemy territory for Fulmer in a bygone era when Alabama and Tennessee were transposed on opposite sides of the spectrum.

“I don’t know all of what Alabama has done,” Fulmer said. “But whatever they have done has been very successful.”

He doesn’t know what it is, but he wants it.  Saban envy, as inspired leadership.  He’s getting a pass for it, too.

Filed under Because Nothing Sucks Like A Big Orange, Nick Saban Rules

For some reason, Herbie doesn’t seem to have Kirby’s full attention here.

Kirby looks like somebody who forgot to pick up something from the grocery store and is about to get chewed out by the wife over it.

A couple of reviews, and a (potential) project

It’s the most wonderful time of the year and all that, so I thought I’d bring two items to your attention as potential holiday gifts for the Dawg fan you know and love.

The book is partly a history of The Dawgvent and partly a compendium of some of Rob’s funniest observations on Georgia football (actually his observations on certain other programs are even funnier).  As somebody who traces his virtual fandom back to the DV’s earliest days, the first section was fascinating to read.  (Although I did tease Rob about not having more to say about the infamous Rolo; Rob’s response was that he would have had to write an entire chapter on him to do it properly.)  It’s a fun read for anybody who loves the program and if that someone is an Internet geek who’s been around for a while, it’s almost a necessary addition to that person’s library.  Recommended.

My second suggestion should come as no surprise to anyone who knows how important music is to me.  I’m a firm believer that you can’t have a proper tailgate without good music.  The problem for me comes with the delivery system.  I’ve run through two boom boxes — portable speakers, if you prefer a haughtier vernacular — that have proven to be flimsy enough to break while being jostled in the back of a SUV or had batteries that lost their juice over time and couldn’t hold a charge long enough to survive a five-hour tailgate.

This time, faced with my third purchase (first two ran in the neighborhood of $150-200 each), I made a vow to find something with a more robust battery, preferably one that was modular, so that if/when it eventually died, I could replace it without having to ditch the speaker as well.  My mission eventually landed here, with this. 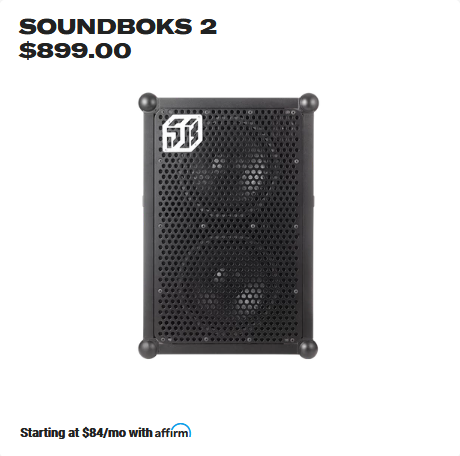 This thing is, I admit, a little insane.  It’s built like a tank.  It’s a little heavier than the other speakers I’ve used, but I found it easier to maneuver because of its twin handles.  (There’s an optional backpack, if you’re even crazier than I am.)  The battery is advertised as able to hold a charge for 30-40 hours of outdoor playing and I have little reason to doubt that.  I ran it for almost six hours at its first tailgate and the power indicator never moved.

It’s loud as shit, too.  If you’re somebody like me who gets irritated at other tailgaters playing their tuneage loudly enough to bleed into and over your finely honed musical selections, then this thing is a godsend.  I can pretty much guarantee you’ll never have that problem again.  As one of my friends said after the Kentucky game when I brought the Soundboks for its maiden voyage, it ruled the parking lot.

There’s also an amusing Spinal Tap tribute, as the volume indicator goes to eleven.  How can you not love that?

It’s easy to set up and use, with only a couple of knobs to fiddle with.  It’ll take a music source directly jacked in, like my iPod, and it’s also Bluetooth enabled, so you can run music off your phone, if you prefer.  Sound quality, even blasting away, is far better than anything I’ve had before.

Yeah, it’s pricey.  But I’m on my third speaker in less than five years and if this turns out to be the last one, then I figure I’m ahead of the game.  If you’re looking for the ultimate recommendation, all I can tell you is that I had two people come up to me during the tailgate to get the link to the company website so they could order one.

As for the project mentioned in the header, perhaps some of you might remember that I ran a holiday gift guide post about three years ago.  My thought is to turn that into something more robust, in the form of a permanent page linked at the top of the blog, that’s organized by categories so that someone looking for the perfect gift for the rabid football fan in his/her life will have a useful reference guide.  Much like the Lexicon, I’d like this to be a collaborative affair with your input.

So here’s what I’d like to do.  In the comments thread to this post, if you like the idea, tell me.  Assuming there’s enough positive interest in proceeding, I’ll set up the page.  There, use the comments to make suggestions, preferably in a one paragraph format that describes the product, why you recommend it and provides a handy link for reference.  I’ll then start formatting the recommendations (giving credit where credit’s due, of course).  Let me know what you think.

Rather than continue to pontificate endlessly about what Tennessee’s hiring of Jeremy Pruitt might lead to — and, man, judging from the reactions I’ve seen on Dawg message boards and elsewhere, there’s a lot of concern — I thought I’d just gather a few tidbits in one last post on the subject, at least until he’s actually out there doing something that affects Georgia football.

As for a last thought, while you read all the praise pouring in for Phil Fulmer making the best of a bad situation with the Pruitt hire — a situation that Fulmer helped foster by interfering in a hiring decision and using that to overthrow the sitting AD — keep in mind this observation from David Wunderlich.

"It didn't work out? How can you blame me? I hired someone who worked for the best coach of all time?"

And as far as I know, no one yet *has* been fired after hiring a former Saban assistant, so there you go.

Remember, Schiano is a defensive coordinator for one of the best coaches in college football who got run out of Urnge Town before he even got there.  That Tennessee fans take solace in the Nick Saban seal of approval is one of this football season’s amusing ironies.

One thing those of you who brush aside concerns that the CFP might grow beyond an eight-team field tend to overlook is how invested coaches are in having as many teams taste a playoff as possible.  Nothing polishes a coach’s resume like a “made the national tournament” entry.  Jim Boeheim is probably the best known advocate of the more, the merrier approach, but now Jim Harbaugh is ready to throw his hat in the ring.

“I would just analyze it in terms of every other sport whether its gymnastics, basketball, pro football, FCS football … pick a sport and they have a playoff to get to a champion,” Harbaugh said. “None of them start with the last four. You have a great model with the NFL with their 12 teams and a great model in the FCS with their 16 teams and they just (increased) it to 24.”

A 16-team playoff would force the eventual champion to play four postseason games which could add extra weeks to the season but Harbaugh said the season is already long as it is.

“The national champion now is playing 15 games, 14 games for the teams in the playoffs,” Harbaugh said. “They are already playing a lot of games.”

In for a penny, in for a pound, as they say.  At least if you’re the one making money off the deal.

Filed under BCS/Playoffs, Heard About Harbaugh?

“It’s not about gaming, it’s about how you regulate it.”

If you haven’t been paying attention, the Supreme Court is currently pondering a case that could usher in legalized sports betting nationally.

This, of course, would lead to the apocalypse, at least if you believe the posture schools and the NCAA have taken against this possible scourge.

Then again, maybe not so much.

“I’m certainly interested in what that outcome might be,” SEC Commissioner Greg Sankey said. “I haven’t had time to look at the information from the arguments, and we’ll await that decision. I don’t know that I predict any adjustments, per se, on our side, but I also wouldn’t assume there won’t be some level of attention to the realities that might come from that decision if it alters it for us. (We’re) attentive, and the decision could certainly have an impact on our culture broadly and that affects the sporting culture. But it’s difficult to sit here and effectively plan without having a decision.”

Translation:  if sports betting is legalized nationally, better we make money off it than somebody else.

Emmert may not be the brightest bulb in the lamp, but even he is aware of how much money is involved in those March Madness bracket pools.  Imagine what an officially sanctioned pool could rake in for the NCAA.  All for the greater academic good, natch.

“So we have differing opinions, thanks for playing.”

As you read this, invites to join this season’s bowl pick ’em are going out.  You know the drill.  You’ll have the entirety of the postseason to pick against the spread.