“For these reasons, I am somewhat skeptical about their explanations.”

If you’re Greg McGarity, the problem with telling a journalist in an interview about the ticket price increase that “We had to do this to make ends meet,” is that you run the risk of said journalist doing his job to find out whether that’s actually the case.

It begged the question: Is that actually true? Did Georgia have to raise ticket prices to make budget?

DawgNation undertook an examination of the finances of the UGA athletics department, using available data, information gathered over the past year and insight from an independent financial analyst.

If you honestly have to ask what the analyst concluded, you haven’t been reading this blog often enough.

Oh, okay.  I know the suspense is killing you.

The irony is that any financial risk faced by UGA athletics linked to its football program is now even lower than ever, which would make any such purely voluntary ’emergency fund’ even less needed than before.

Say it ain’t so, Joe.  I’m shocked, shocked, to hear that.  But what about McGarity’s prior excuse for an $80 million reserve fund — the green umbrella for that rainy day that never seems to come?

Last year, in defending the reserve fund, McGarity said it was a “rainy day fund.” He listed a number of possibilities to plan for, just in case. But when presented with increased costs in coaching salaries this year, Georgia athletic leadership did not dip into the reserve fund. They chose to raise ticket prices…

In Georgia’s case, it’s the coming raises for Smart and his staff that have yet to be revealed. Publicly, they may be the reason for raising ticket prices. But Seaman said he suspects the real reason is simple economics.

“Since nonprofit organizations often behave quite similarly to for-profit firms, even given their legal requirement of not distributing any ‘profits’ to ‘owners’,” Seaman said, “this UGA behavior is quite consistent with standard profit-maximizing behavior in response to demand increases.”

Seaman doesn’t explain why McGarity isn’t capable of being straight about that, but I’m pretty sure we don’t really need any special insight there.

The cost of new and improved

I give Greg McElroy a lot of credit for saying this about the college football attendance drop:

“We are paying less and less attention to the schools that are not in contention,” the former Alabama quarterback said. “I would love to know, on a minute-by-minute basis, the comparison between the 10 teams that we discuss as having a chance at the College Football Playoff on this radio program. And, look, it’s not our fault. We go where the callers want to go. Where do we spend the majority of our time? We spend it on 10, maybe 15 teams. Maybe 20. Because it’s a caller-driven show and calls are most likely going to be on teams who are in contention for the College Football Playoff.

“The teams that aren’t, it feels like they don’t matter. It’s not really true, but people aren’t willing to spend their last dollar to go to a game. Ticket prices are expensive, concessions are expensive, and now you get an incredible experience watching it on your television screen. If your team is in contention for the playoff, you feel like you have to go: ‘I’m gonna go, I’ve gotta see them. This could be my only chance to see a national championship team, of course I’m going to go see them.’ So, they spend their last dollar trying to go to those games. Why do you think Bama was top-4 in attendance this year? It has to do with the stadium, sure, but it’s also because Bama is crazy about football. So, I do think if you’re in contention for the College Football Playoff, you’re going to get more attention and people are going to spend more money on you. If you’re not in contention, people would just assume say ‘Hey, I’ll watch ’em on TV. I’ll watch ’em on the SEC Network.’”

This is the price you pay for kissing ESPN’s ring, for taking Mickey’s money.  Because when ESPN decides it is in college football’s interest — meaning it’s in ESPN’s interest — to shift from its traditional regional appeal to a broader, national audience, this is what you get.  The conferences, the joy of college football for college football’s sake is diminished in a reach to attract more fans who are less passionate about the sport.  The result is an emphasis on the playoffs and a de-emphasis on what used to matter to the typical fan of a conference program.

For now, it’s not hitting us because Georgia is in the thick of things.  But McElroy’s making a lot of sense with regard to the bigger picture.  Given that Mickey signs his paycheck, it’s even a little brave on his part.  Not that anybody’s going to do anything about it.

Filed under College Football, ESPN Is The Devil

Better get used to it.

Georgia checks in third in ESPN’s first 2018 preseason FPI, behind Clemson and Alabama.

The truly interesting part is that Georgia’s second on the offensive side, with Oklahoma being the only team ranked higher.  I guess we’re not going to hear many “the offensive  line is a real question mark” stories this summer.

At the summit, looking down

Bill Connelly points out one other note of interest from the 2018 signing classes.

The most eye-catching story of all happened right at the top:

Per the 247Sports Composite, the Bulldogs and Buckeyes combined to reel in 10 five-star prospects and 35 four-stars among their 52 total prospects. Both classes were among the best ever recorded. No. 3 Texas crept above 247’s 300-point mark as well.

It was the second straight year that each of the top three classes scored at 300 points or higher. 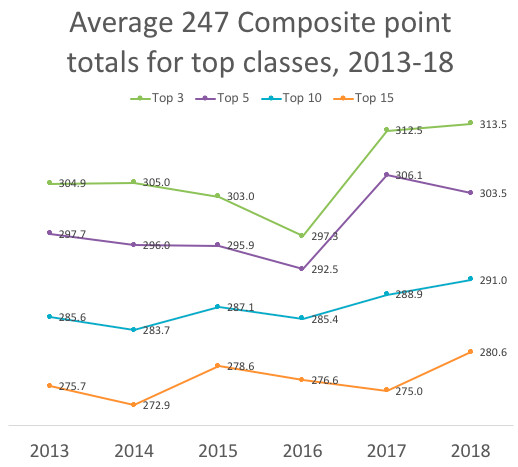 In other words, top-heavy is fine, as long as you’re part of the top.  Georgia is now.  There are a lot of SEC East teams that have some serious climbing to do.  That gap ain’t gonna close itself.

You’ve heard the NCAA has vacated a bunch of Notre Dame wins from the 2011 and 2012 seasons due to an academic misconduct violation.  (I know, I know.)

That in turn has led to this amusing flight of fancy.

Trey Burton was made aware of a painful bit of knowledge when Notre Dame’s appeal of an NCAA ruling that vacated the Fighting Irish’s victories during the 2012 and 2013 seasons was denied.

The former Florida player, who has been a tight end with the Philadelphia Eagles, used Twitter on Tuesday to express that the Gators would have played for a national title to end the 2012 campaign if Notre Dame wouldn’t have been eligible to face Alabama in the game.

Manti Te’o’s girlfriend would have approved of this… if she existed, of course.

Filed under Gators, Gators..., It's All Just Made Up And Flagellant

Apparently, there are some bridges that even Sexton can’t cross.

According to a report from Gridiron Now’s Mark Nagi, who recently spoke to Kiffin for an upcoming book on Tennessee football, former Vols athletic director John Currie told super agent Jimmy Sexton that his client would “never be the head coach” at Tennessee as long as he was in charge.

“What normally happens in those things is when jobs come open, there is usually communication with the agent and the athletic director,” Kiffin said in a phone interview earlier this week. “The agent says something like, ‘Hey, I got these eight to 10 guys; what do you think about this guy here or there?’ … Then the AD says, ‘I want to interview those two guys; those sound good.’

“In that conversation with [agent] Jimmy Sexton — who has a million guys obviously, so it’s not just about me, it’s about all the guys — … [then-Tennessee athletic director] John Currie says, ‘Lane will never be the head coach as long as I’m the athletics director here.’ So once he said that, I didn’t think about it. So that kind of answered that.”

Of course, if I had to pick a bridge, it would be Junior.  Sexton had to know the job was dangerous when he took it.

Filed under Don't Mess With Lane Kiffin, Jimmy Sexton is the Nick Saban of agents and is Nick Saban's agent