The best DB in the nation…

Nice trend there.  Think Kirby might mention that on the recruiting trail a little?

Given the outrage that Greg Schiano’s troubled past at Penn State generated in Urnge Nation when he became a serious candidate to succeed Booch, I have no doubt as you read this that the virtual pitchforks and torches are being assembled for a march on Fulmer over the possibility that Jeremy Pruitt may hire Kendall Briles as his new offensive coordinator.

If you ever wonder how in the world Larry Scott is still gainfully employed as a conference commissioner, read this unbelievable story about how the conference circled the wagons after the recent officiating scandal, and you will wonder no more.

“We have no interest in letting others define us. We do have so much to be proud of … I have seen no adverse impact of sportswriter nastiness among supporters of the university. We should talk about seizing the communications initiative in the sports world. I think some of your concern is probably due to having to deal continually with the characters who populate sports media.”

These people deserve each other.

Their cluelessness would ordinarily be amusing, except these are some of the idiots running college athletics into the ground.

“But other than that I came here to be a quarterback.”

The SEC requires that all players be made available to the media after the conference championship game, which meant that the media got its first crack at Justin Fields this season.  That, in turn, meant the media got to touch the third rail of Georgia football — Fields’ future plans.

He handed it diplomatically, which I would think wasn’t the easiest thing to do, considering his team had just lost a heartbreaker and that he was a key part of a play that was certainly a factor in the loss.

Seth Emerson ($$) explores the question thoughtfully here.  My impression of Fields is that he is an immense physical talent, something that was clearly on display in the UMass game, but that he is going through a transition of learning how to play in a pro-style offense.  What Seth does a good job of bringing out is that such a transition was a feature for Fields in picking Georgia in the first place.

“I feel like we probably added a few plays, a few formations for me. But other than that I came here to be a quarterback,” Fields said. “We run a pro-style offense. If I want to play at the next level, this is the type of offense they run. So I kind of knew that before I was coming here.”

I assume the coaches have been straight with him throughout the learning process.  I also assume that it’s obvious to everyone concerned that Fromm has good command of Georgia’s offense already and, post-LSU fretting by the fan base/media aside, won’t be supplanted by another quarterback whose grasp of the offense isn’t as strong, skill set notwithstanding.  Fields himself sounds like he knows that.

“Jake, he’s a great quarterback,” Fields said. “He’s probably the smartest quarterback that I’ve been around in my whole life. You’ve got to give it to him. I’m just going to continue to learn from him to get better.”

If Fields were to decide to jump ship after the bowl game, he’d have to sit out a season.  I would also expect that Kirby would have a list of schools, starting with other SEC programs, from where Fields would be blocked from transferring.  So unless he wants to go Juco for a year, that makes starting in 2019 anywhere else an iffy proposition anyway.  Seth notes that the ideal scenario for all concerned would be for Fromm’s improvement to continue such that going pro after next season would be the logical course of action for him.  But who the hell knows as we sit here if that’s how things play out?  I doubt even Fromm knows for sure.

Fields knows he’s at a program that’s invested in his future as a starter.  The question is whether Georgia’s timetable for that matches his own.

“I’ve always looked at bowl games as more of a reward than another spring practice,’’ Johnson said. “When we talk to our team about playing in a bowl game, certainly our No. 1 goal is to try to win the game. But I also want our team to enjoy it and have some fun.’’

Convincing a bunch of kids that a trip to Detroit in late December will be a fun time and a reward should be no problem at all for a man who’s made his bones selling his program to recruits for years, amirite?

And, yes, I know, in and of itself, that’s not a complete indication of schedule strength, but here’s Sagarin’s SOS rankings on that:

One of those numbers really isn’t like the others.  (Well, okay, two, but I digress.)

The point here, again, isn’t to re-litigate whether Georgia belongs in the CFP field this year — that ship’s already done sailed.  Rather, it’s to say that the debate about whether the Dawgs, two losses and all, deserved to be part of the discussion was certainly a valid one. 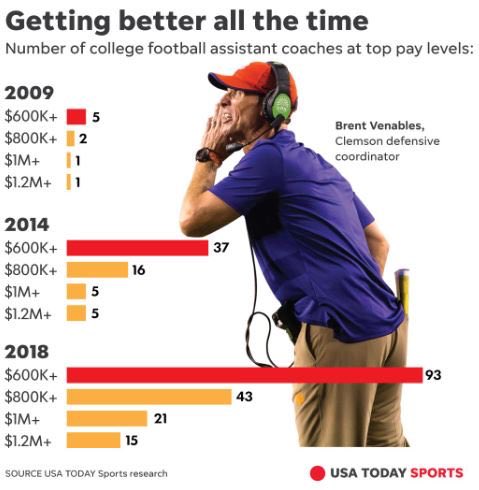 Jimmy Sexton’s First Rule of Negotiations:  When you don’t have to pay some of the help, that money’s still gotta go somewhere.

Then again, maybe the coaching’s gotten that much better in the last ten years.