Bill Connelly finds a correlation between weight and a team’s S&P+ performance. 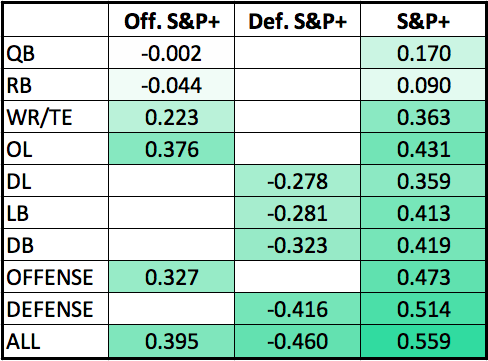 Backfield size doesn’t matter all that much, but offensive line size certainly seems to. And while size makes a bit of a difference on offense, it makes a much larger impact on defense.

Tactically, you can scheme your way to a strong offense. But with defense, size and recruiting rankings end up telling us quite a bit about what we need to know.

Now, one potentially obvious caveat: size and recruiting rankings are not isolated factors. We know a more fully developed offensive lineman (6’6, 305 pounds) is more likely to receive a four-star ranking than a 6’7, 245-pounder with a great frame and solid athleticism. We know that a 205-pound, carved-out-of-granite safety is going to draw the eyes of Rivals’ evaluators more than a 175-pounder with potential.

O-line didn’t surprise me too much, although like many of you, I can remember Georgia’s huge offensive line from a few years ago that never really amounted to much.  Defensive back, though, does at first thought surprise a little, but given what a lot of coordinators now require out of their schemes, it does make sense.  (Nor does it surprise me that Smart has put a big emphasis on size in both places.)

In any event, give his post a read.  It’s certainly interesting.

Another idea whose time has come?

I’ve thought this for a while, but with the confluence of a couple of things — the likelihood that Judge Wilken is going to rule against the NCAA in the Alston case and the concentration of talent at the elite programs we saw evidenced again yesterday — I think Dan Wolken makes some sense when he argues there needs to be a change made in the interest of competitive balance.

In other words, the college football world order doesn’t seem to be changing much. If anything, the bluebloods are strengthening their grip on the best talent, and thus, the championships for the foreseeable future.

But the NCAA, if it had the willpower and the mandate from its masses, could start to create more parity with the snap of its fingers. All it would take is cutting scholarships down to 70.

I’m always a little leery when someone goes “all it would take”, because nothing in life is ever that easy, but I do think are some obvious consequences in shrinking D-1 roster size that would be beneficial.

There’s probably more I’m not thinking of right now, but you get the gist of it.

Dan picked a limit of 70, because that’s the size of a travel roster these days, and I see the logic to that.  I wouldn’t have a problem dropping down to FCS levels, for that matter, which would increase the effect on savings and competitive balance.

If you’re worried about smaller rosters and injuries, there are options to address that, from liberalizing the redshirt rules even further for greater roster flexibility to even dropping a regular season game.

The devil’s in the details, I know, but I think there’s sufficient merit in the idea that it deserves some serious consideration.  I know the coaches would fight like hell against it, but if Alston doesn’t go the schools’ way, I wonder if that would take the debate up to a higher pay grade, so to speak.

Anyway, it’s worth a thought.

Should he stay or should he go…

Georgia’s surprise signee yesterday seems to be saying it both ways.

“I just signed with Georgia,” Mathis told The Detroit News. “It’s not always about Justin Fields. I didn’t know if Fields was going to Ohio State so I decided to go to a place that I had the best chance of playing at in a couple of years.

“I’ve been wavering back and forth for the last couple of days, but I decided today (Wednesday) really. I decided to go to Georgia because of my chances of playing more. They only have one quarterback on scholarship on their roster (Jake Fromm). I’m enrolling early, can’t wait to get there.”

If I’m reading that right, he seems to be saying that the uncertainty for him isn’t Fields staying at Georgia, but maybe/maybe not going to Ohio State.  As a result, Georgia became Mathis’ safer default option.

Evidently, while that may have been a late decision on his part, it was a decision that had been guided for a while.

The idea of potentially having Jake Fromm as the only scholarship quarterback on hand for spring practice was a troubling thought indeed, and that’s the reason – according to head coach Kirby Smart – that he and his recruiting staff had been keeping their eyes peels for potential late additions for basically the entire 2018 football campaign.

“I mean you wouldn’t be a very good coach if you didn’t think this could happen all year, right? So, we were anticipating this as we looked across the country at quarterbacks,” Smart said. “What you find tough is you’re talking in hypotheticals. So yeah, I might be interested coach, if this, if that, if you all have one guy. That’s hard to do in the middle of a season. So, I was very animated with our staff about continuing to recruit kids across the country, because we have a possible situation with one of them with one quarterback on scholarship.”

With Mathis, his interest in the Bulldogs was already established. He camped at Georgia over the summer, and despite his commitment to Ohio State, the Bulldogs stayed in contact with the four-star performer throughout the year.

“We tried to keep relationships developed,” Smart said. “But that one came really fast, where there was mutual interest, he had come here to camp before, and he jumped on board.”

At some point, then, prudence morphed into necessity.  Would the results have been the same without Smart’s planning, though?

I know some of you think playoff expansion is motivated by making the postseason more encompassing of the goal to determine college football’s best team.  I think you know my belief is that the primary motivation for bracket creep is the chase for the almighty dollar.

No disrespect intended, but if I’m right, what ESPN wants matters a whole lot more than what Joe Fan wants — which makes this of interest.

ESPN expense: Three years ago, ratings for weeknight New Year’s Eve semifinal games dropped 36 percent. The CFP quickly found out The Worldwide Leader isn’t in the business of losing money. That was the end of weeknight semifinals; they were moved to weekends. So far, no one has asked ESPN how it would feel about essentially doubling its investment in the playoff if it goes from four teams to eight. (A high-ranking ESPN official would not comment.) Any expansion would have to be worthwhile to ESPN.

Early on, according to one source, school presidents said “not only said no, but hell no” to quarterfinal games on campus in an eight-team format. A TV consultant told CBS Sports all those quarterfinal games wouldn’t necessarily be a ratings winner. UCF as a No. 8 seed playing at No. 1 Alabama might be sexy this year, but what happens when that Group of Five team is a 10-2 Marshall or an 8-4 Central Michigan?

The expense for any entity that bids on the CFP will be significant. Another round of conference realignment may be on the horizon. Plenty of other sports properties will be up for bid as well (NASCAR, NFL and ‘Monday Night Football,’ MLB all by 2024 at the latest). Any streaming/broadcast/cable company must choose wisely on how to spend its money.

CBS Sports reported in 2016 that the Big 12 could earn an extra $1 billion by expanding by as many as four teams. The Big 12 eventually decided there were no desirable teams for expansion. It also decided it didn’t want to antagonize its TV partner.

For all the breathless analysis of why the playoffs should expand to an eight-team format, there’s an essential truth that generally gets brushed over.  There are almost never any seasons where eight teams deserve to be in a legitimate conversation about national titles.  Hell, most years there aren’t even five.

So, Dodd’s point about a mediocre mid-major grabbing a guaranteed spot is a legitimate one.  But ESPN’s concern probably goes farther than that.  What happens when, say, a four-loss Northwestern team pulls the upset in a conference championship game and makes the playoff field?

This is the problem you have with determining participants through a hybrid of subjective/objective criteria coupled with P5 conference championship games.  The inevitable result is there will be teams left out that are clearly better than some of those admitted, with the attendant grumbling about the unfairness of the system.

Sort of what some like to pretend exists now.  The thing is, the ones complaining aren’t paying for the privilege of doing so.  (Not to mention currently there is no risk of a mediocre team crashing the semis.)

So, back to Dodd’s point.  What if ESPN isn’t convinced bigger is better/more valuable?  Sure, maybe the commissioners can talk another broadcast source into bellying up to the bar, but now you’re answering to another master and who knows what new considerations will go into that partnership?  Further, if you’re Greg Sankey and you’re being asked to toss aside your conference’s lucrative championship game for the greater good, how do you know that the math will work out?

This is not to make predictions.  But if money talks in the way I believe it does and Mickey is reluctant, what do you honestly think happens with expansion?  Remember, there are always limits, as occurred when the last round of proposed expansion for the men’s basketball tourney turned to dust as nobody would step up to pay the NCAA for it.

Get me outta here, Coach.

Well, this answers one question.

Big pick up for #GaTech and @CoachCollins. Davis caught 22 passes for 237 and 6 TDs last season for UConn, tying their record for second place in single-season history. https://t.co/IUXmAxoo6v

Yes, even for a tight end, there are worse places to be than Georgia Tech.

Filed under Georgia Tech Football, Randy Edsall Is A Dick

“We definitely feel like we’ve dropped off with our speed on the edge after Lorenzo (Carter) and Davin (Bellamy),” Georgia head coach Kirby Smart said. “With Jermaine and Nolan, I don’t know if there are two better rushers in a signing class anywhere in the country when it comes to speed. They have to help us disrupt quarterbacks.”

I don’t think D’Andre Walker is a slouch in the speed department; his 7.5 sacks in 2018 leads the team in both seasons.  But when only one other defensive player notched even two sacks (Channing Tindall, a true freshman who had limited playing time most of the season), yeah, Kirby’s got a point.

Johnson’s already practicing with the team.

“Alabama’s not gonna get ’em all…”

No wonder ‘Bama fans are starting to get a little pissy about Kirbs.