The latest to learn that is Tech’s assistant head coach Brent Key.

Georgia Tech senior defensive lineman Brandon Adams passed away suddenly on Saturday. Police said the 21-year-old collapsed near campus, and was taken by friends to a local hospital, where he died. Tributes to the young man poured in, and you can read many of them here, from his teammates and coaches and school administrators.

And then there’s Yellow Jackets associate head coach and offensive line coach Brent Key, who spent almost one and a half sentences remembering Adams before being overcome by excitement over this weekend’s commitment of a four-star cornerback prospect. 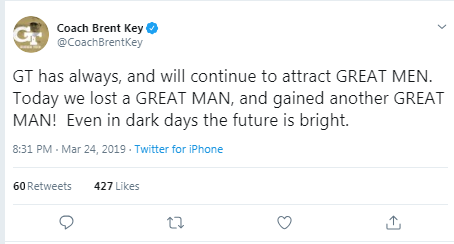 Key’s tweet, flooded by replies pointing out how bad an idea it was and how this was probably not the time to remind everyone about the interchangeability of college football players, was deleted just before noon today.

I’m sure he meant well.  About recruiting, anyway.

It turns out Tyrique Stevenson wasn’t alone when he was arrested yesterday.

A statement from the Athens-Clarke County Police Department has identified a second Georgia player involved in the incident which resulted in the arrest of freshman defensive back Tyrique Stevenson early Sunday morning.

According to the statement, senior wide receiver Tyler Simmons and Stevenson were part of an alleged physical altercation with employees at Cloud Bar in the early hours of Sunday morning. Cloud Bar has declined to press charges against the two UGA players but both have been charged with disorderly conduct by the Athens-Clarke County Police.

“At 12:50 am, an ACCPD officer was working off-duty at the bar and was alerted that a fight was taking place inside the bar,” ACCPD said in a statement. “The officer called for assistance and multiple ACCPD officers responded to a chaotic scene with numerous bar patrons spilling out onto the sidewalk and street.”

Stevenson is listed on the ACCPD website as being booked into the Athens-Clarke County jail at 2:42 a.m. on Sunday and released at 3:26 a.m. on $1,000 bond. Simmons, however, was not arrested and is not listed on the website. ACCPD did confirm that both players are being charged.

Mentoring, for the win.

At some point, Vanderbilt’s gonna start getting some hope because, suspensions.

“It’s just different buckets, how the money gets structured.”

Just for yuks, when you read this article, try substituting student-athletes for coaches every time you read a compensation reference.

It’s not rocket science, folks.  Schools will pay what they can afford to pay, just like any other business venture.

One thing about that seemingly eternal mantra that this will be the year Georgia throws more to its tight ends is, as Seth Emerson points out ($$), it’s been something of a revolving door at the position.  Not with players, so much.

Todd Hartley, after three years away, is settling back in at Georgia as the tight ends coach. (He had an off-field role during his first turn at Georgia.) But while Hartley earned high early marks for his intensity from senior Charlie Woerner, there has also been an adjustment.

This is three position coaches in three years for Woerner, who admits that is less than ideal.

“Yeah, it’s tough. That’s what I was talking to somebody about the other day. Because they all teach tight end a little differently,” Woerner said. “That’s the hardest thing for me right now — breaking the old habits of my old coach, and learning what coach Hartley wants me to do. And I love learning new things, but it’s hard to break the old tendencies.”

And, yeah, that includes blocking, according to Woerner.  But Hartley’s intense, so at least he’s got that going for him.

A sampling of the reviews:

“I’m a current NCAA athlete, I don’t want to say anything to get in trouble, but that’s not accurate,” said Ryan Kriener, another Iowa player.

“We kind of work a little bit harder than that,” said Grant Williams, the Tennessee forward, who spoke with a touch of modesty.

“I feel like they left out a few things,” said David Crisp, a Washington guard.

Then again, they’re not the target audience.

If ever the phrase “dulcet tones” is a perfect description of a person’s vocal abilities, it’s Aaron Neville’s.  Last night I enjoyed seeing him perform at City Winery, where he enthralled the audience with his 1966 hit, “Tell It Like It Is”.

You know, it’s reassuring to see a performer fifteen years my senior manage to go at it without missing a beat.  Thanks, man.