I got a few emails this week asking if I knew where he was going.  I didn’t then, but I do now.

So yeah. I’m working for ESPN now. The Yankees called, as Dan Jenkins once said. First piece will be Friday, I believe.

(I always wanted to have my own Notes app announcement!) pic.twitter.com/WUuvqSGpW8

Good for him, of course.  I just hope Mickey doesn’t bury him behind a paywall.

Yeah, that could be a challenge.

To reiterate something Bill Connelly posted,

The higher the number, the more likely returning production in these areas is to coincide with strong offense:

Production from WR's returning in 2019:

One set of those numbers is most definitely not like the others.

We are about to find out if Georgia really is at the “reloading, not rebuilding” stage.

The preview mag hits the newsstands today.  I’ll grab a copy on my way home, but in the meantime, here’s a peek at his strength of schedule rankings. 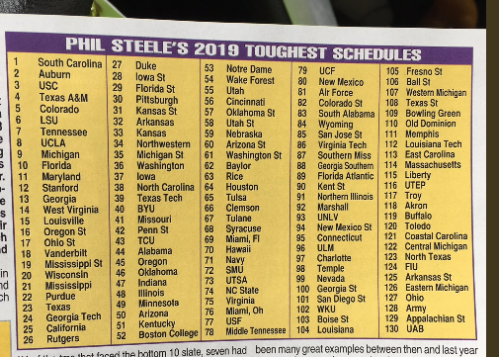 That is three SEC teams in the top four, six in the top ten and nine in the top twenty.  At 51, Kentucky has the softest ranking.  Alabama clocks in at a towering 44th, but we all know Saban could use the help.  (To be fair, ‘Bama hasn’t played ‘Bama.)

Let’s hear it for Phil Fulmer:  because UT didn’t fire any coaches this fiscal year, the athletic department, flush with an operating revenue of $135.3 million, didn’t finish in the hole.

The man’s a fiscal genius.

Filed under Because Nothing Sucks Like A Big Orange, It's Just Bidness

At And The Valley Shook, Poseur is back with another SEC unit ranking post, this time for one of our favorite spots, the offensive line.  I’ll get to his criteria in a moment, but let’s cut to the chase with his top three lines:

And because y’all asked for it, last year’s predicted rank is in parenthesis for purposes of mockery.

1. Georgia (3). There’s not much this unit couldn’t do. Georgia had the best rushing average in the conference, though some of that might have been the pair of backs they had. The Dawgs also allowed a low number of sacks, and they return a bulk of their experience. They place a player on each of the top three All-SEC teams with Andrew Thomas receiving top honors. They are pretty loaded up front.

2. Alabama (4). A trend you’ll see this year is most of the top lines last year lost a ton of talent while the bottom half of the SEC is bringing back a lot of experience, as if they were all spending last year building the lines. Bama brings back just 49 games of experience from one of the country’s best lines, but they get the Bama pass. They’ve proven they can plug and play, and Athlon placed Jedrick Wills on the first team and Alex Leatherwood on the second.

3. Missouri (1). The last of our clear top tier. They were top three in production last year and they return 77 career starts. The run blocking fell off out of nowhere, but they allowed just 2.9 sacks per 100 attempts, which is fantastic. Tre’Vour Wallace-Simms gets the first team as a reward for the line’s efforts.

His rankings are based on (1) a formula of his own devising (“I take the yards per average rush and compare their standard deviation from the SEC average. I do the same for sacks allowed per 100 pass attempts. This makes 0 perfectly average, though I multiply the score by 100 to make it easier to read. 100 is one standard deviations from SEC average.”); (2) a look at Athlon’s preseason All-SEC team for general reputation; and (3) the number of career starts returning according to Phil Steele.

With regard to the third, I don’t want to say I reject that as a significant factor entirely, but I am mindful of Bill Connelly’s assessment of returning production on the offensive line.

Returning experience on the offensive line doesn’t have nearly the statistical impact that we expect. But with more data in the bank — and a new set of tweaks to S&P+ that I’ve been unveiling at Football Study Hall — we can see there’s a little correlation.

The higher the number, the more likely returning production in these areas is to coincide with strong offense:

With more data, the offensive line correlations have begun to grow stronger, which makes sense, but the conclusion remains: continuity in the passing game matters a hell of a lot, and continuity in the run game doesn’t have as strong an impact.

So there’s that.  One reason I suspect it’s the case — and mind you, I’m pulling this straight out of my ass — is what Poseur cites as a reason for Alabama’s showing despite the low returning starts number.  Alabama recruits on the offensive line like a sumbitch and it’s got quality backups who are ready to start without missing a beat.  Granted, there are few other SEC teams who operate similarly.  Further granted, Georgia is one of those.

Anywho, with that in mind, here are a few random observations of my own:

It’s like not having regrets over that five minutes of your life you’ll never get back, because you didn’t give those away in the first place. 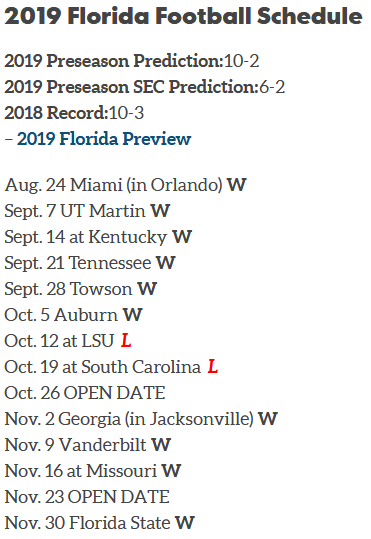 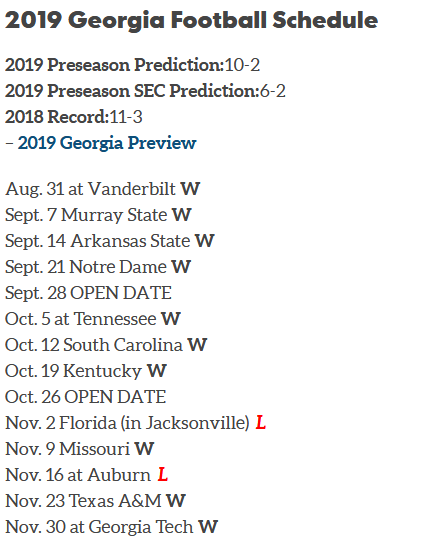 Yep, that’s right:  no SECCG for you, Dawgs.  In fact, with two regular season losses, it’s a precursor to the most lackluster regular season aftermath since Kirby’s first year.

Now, Fiutak’s been high on Georgia in previous seasons, so I can’t accuse him of some sort of bias.  He’s got South Carolina losing to the Dawgs and beating Florida, so all I can think of here is that he’s betting on some kind of unusual circumstances that allow the Gators to spring the upset in Jacksonville.  (This is probably an apropos moment to remind you that Florida led the conference in turnover margin last season and that regression to the mean is a beyotch.)

He’s also got Florida beating Missouri on the road a couple of weeks later, which means he’s calling for Mullen to reverse fortunes against two teams that beat his by 19 and 21 points respectively in 2018.  That’s a bridge too far for me, but obviously his mileage varies.

One thing I am curious about, though:  let’s say for the sake of argument that the Gators do pull the upset in Jacksonville.  At that point, Georgia is operating without a net in the East in that it can’t afford another conference loss.  Does the renewed sense of urgency make the difference at Auburn, leading Georgia to its first road win against an SEC West team on the road under Smart?