“He might not play high school football until the fall of 2020.” 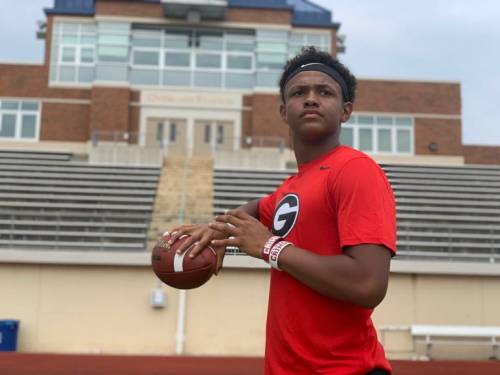 But that hasn’t stopped the kid from scoring offers from Alabama and Georgia.

This is how fast it is. On a Saturday in early June, Davis went to a camp in Athens and showed his talent in front of Georgia coaches. After the camp, he met with Bulldogs quarterbacks coach, James Coley, and was surprised with an offer.

Four days later, Davis was at a similar camp at Alabama. When it was over, Saban gave him an offer.

“I’ve always dreamed of this as a kid,” Davis said, “and when they told me I got an offer, I was like, ‘Dreams really do come true.’ I didn’t expect it. I felt like they see my work ethic at this age and how much potential I have. I haven’t proven anything yet. I haven’t touched a high school field yet. But they haven’t seen anything yet. I’m telling you that.”

The best part of this story?  He hasn’t even won the starting job on the high school team yet.

5 responses to ““He might not play high school football until the fall of 2020.””